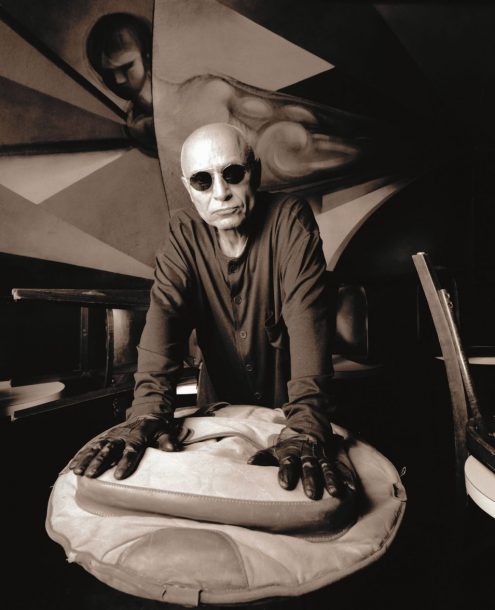 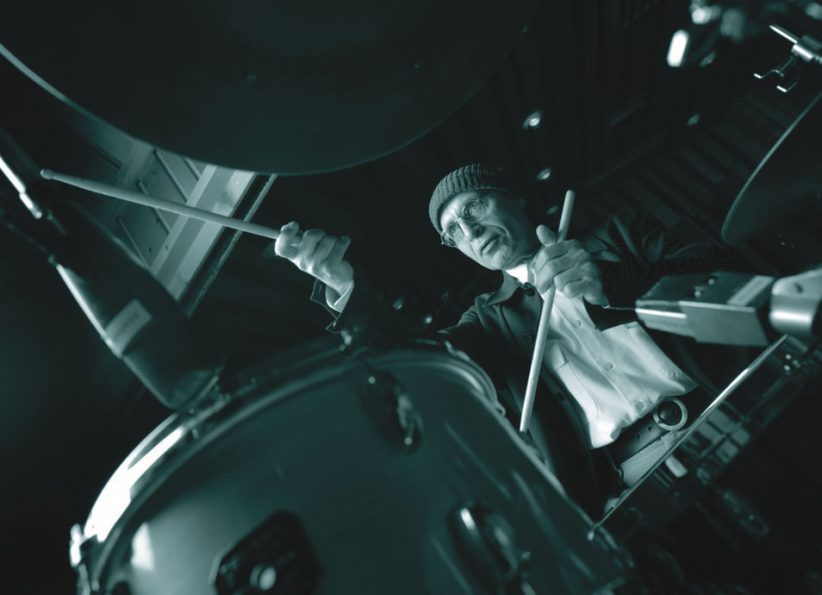 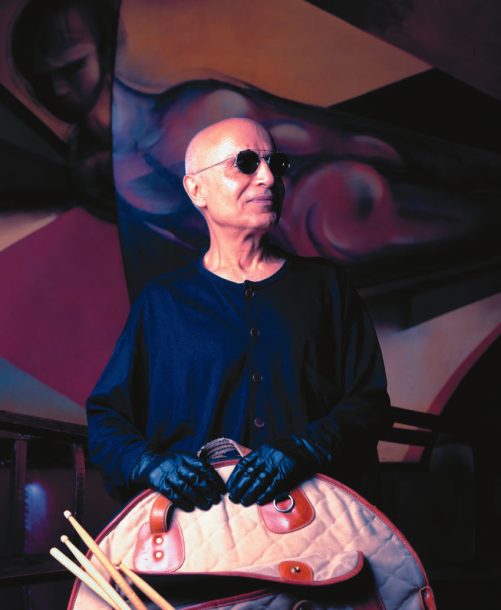 The man who has nudged jazz drumming toward nuance and understatement since the classic Bill Evans trio with Scott LaFaro recently turned 70 and Motian admits his apprehension about the birthday-driven press interest. “It’s not like I won the Nobel Prize.”

Motian is very keen to talk about Europe and Europe (Winter & Winter), however. The latest disc by Motian’s Electric Bebop Band (or the EBBB, a curious acronym dependent on breaking “bebop” into two words) is neither an arch statement nor a monumental homage, but more an ambling love letter to the continent that has aided and abetted Motian’s work for decades. Though the program is indelibly American, with compositions by Tadd Dameron, Thelonious Monk, Herbie Nichols and Charlie Parker laced together by originals by Motian and EBBB guitarist Steve Cardenas, the proceedings reflect Motian’s long-term exposure to the pace of life and the gravity of culture in Europe. “Oska T” becomes an insouciant shrug. “If You Could See Me Now” has a kiss-in-the-street tenderness. And “2300 Skidoo” exudes savoir-faire.

Additionally, Motian’s stereophonic ensemble concept-saxophonists Chris Cheek and Pietro Tonolo are on separate channels, as are Cardenas and guitarist Ben Monder, with Motian and bassist Anders Christensen filling the center-and the almost too perfect Winter & Winter mix gives the music a European gloss.

While the EBBB’s impeccably articulated ensembles underscore the rich compositional legacy of bebop, and their wide-ranging improvisational approaches reflect the genre’s enduring relevancy, the fulcrum of the music is Motian’s sound. Motian maintains that the secret to his sound is his white-coated Remo Weather King drumheads, but there are several salient components to his approach. He has an undulating sense of pulse, perhaps attributable to the doumbek rhythms of the Turkish 78s that filled his home when he was a child. His use of cymbals is crucial-his distinctive ride patterns are at least partially attributable to a mid-’50s encounter with Thelonious Monk, when the recently returned

Korean War vet subbed for an AWOL Kenny Clarke. The sly minimalism of his phrasing is traceable through his early ’60s work with Evans and Paul Bley, as well as the offsetting, momentary dust storms of cymbals and drums. Unlike the vast majority of jazz drummers, Motian’s signatures are to be found in counterintuitive responses to the unfolding music: He chooses silence or near silence where many drummers knee jerk their way through a flurry of chops, and slips a cubist sketch of a tune’s rhythmic implications into the niches most drummers simply ride through.

His tunes operate much the same sublime way, though Motian modestly characterizes them as the residue of long plodding hours at the piano trying to make something-anything-work. On Europe, the Motian-penned “Blue Midnight” and “Fiasco” are beguiling tides of phrases that swell with harmonic tension, creating the breaking surf of electric guitar, tenor and drums that have been at the center of Motian’s music since his ’80s bands with Bill Frisell, Joe Lovano and the late Jim Pepper. There are precious few drummers who have created as enduring an ensemble sound as Motian, which was recently confirmed by the reunion of Motian’s ’80s quintet (with Lovano, Frisell, bass player Ed Schuller and saxophonist Billy Drewes) at the Eddie Moore Jazz Festival and a subsequent week at the Village Vanguard with his unassumingly innovative trio with Frisell and Lovano. And though Motian isn’t the sole leader on the recent Amaryllis, his second ECM collaboration with pianist Marilyn Crispell and long-time rhythm-section mate bassist Gary Peacock, his dedication to a strong ensemble sound is heard to fine effect.

Going back through Motian’s record catalog on Soul Note, JMT and Winter & Winter is revelatory, as it contains album after album that has not merely stood up to the test of time, but has ripened. Motian downplays the idea, however, that his is an innovative drum sensibility and that it is intrinsically linked to his writing.

“I’m just trying to create something that people will enjoy,” Motian says of his modus operandi. “I don’t have a conscious connection between the way I play drums and the way I write. If there’s any connection at all it’s because I play music on the drums. I’m not thinking drums when I play. I’m thinking of the song and what the other musicians are doing with the song. Sometimes I cross a bar line when I’m doing that. But it wasn’t like Bill Evans and Scott LaFaro and I decided this was what we were going to do. We were too busy doing it to think like that.

“I’m not a learned composer, but I work a lot like Stravinsky,” laughs Motian, amused at the notion that he partakes of a “compositional process.” “Stravinsky would be composing at the piano and play a 10-note chord, and then release one finger at a time until he got the sound that he liked. That’s the way I work. I might end up with a short line, some changes, maybe a whole AABA song, but I really don’t know what I have until I run it down with the band.”

For Motian, rehearsal is the midwife of his music. “The band is going to play the tune, so it just makes sense that they’re part of the process,” Motian explains. “Lovano used to have a loft on 23rd Street where he, Frisell and I would rehearse. We would work for hours on one tune. They would make suggestions; try things out spontaneously. The whole idea was to make the tune fit the sound of the band, because there’s no sense in playing it if it doesn’t work with the band.”

While Motian’s trio and earlier units built their ensemble sound primarily around the leader’s compositions, the EBBB built its sound using the bebop repertoire. Unlike the vast majority of ensembles, however, the EBBB did not adapt their sound to the venerable tunes, but used their sound to transform the material. “I knew the band had its own sound pretty much at the beginning,” Motian reflects. “But I didn’t know how strong the sound was until we started adding my tunes and standards that weren’t bebop. The sound didn’t change. Then, when players started coming in and out of the band, the sound would change just a little, but not much. That’s when you know you have a sound, when it holds up with all the changes that happen.”

The EBBB has thrived despite what normally are a destabilizing number of personnel changes; Motian is the sole remaining original member. Still, it’s significant that now, after platoons of musicians have passed through the EBBB’s ranks-including such talented 20-somethings as Joshua Redman, Brad Shepik, Chris Potter and Kurt Rosenwinkel-that Europe benefits from a strong contingent of European musicians. Motian couldn’t be more pleased with bassist Christensen’s ability to coax an acoustic resonance from an electric instrument and Tonolo’s cogency on soprano, an instrument that usually leaves the drummer unmoved.

Christensen and Tonolo’s presence on Europe reinforces the sense of inspiration that seemingly conceived and guided the making of the albums. Or is inspired too strong a word?

“Inspiration is a funny thing,” Motian says. “It doesn’t happen all at once. I may be inspired by something or someone when I write something, but something else might inspire me when I’m playing it with the band months or years later. So, I can’t say the album was just inspired by Europe. But the way people respond to the music in Europe stays with you.”

With a bemused laugh functioning like a prefatory phrase, Motian elaborates upon what he considers to be the delicious dichotomy of the European jazz experience. “Jazz is a big social event there,” he says, recalling his 10th and most recent EBBB European tour. “We played a club in Poland and it seemed like everyone had a camera, taking pictures of us, taking pictures of each other. It was packed. People were on the shoulders of other people. It was nuts.

“But jazz is also this very serious art form there,” Motian says. “We’ve played these incredible theaters and opera houses that are hundreds of years old. We played a concert hall in Italy where Mozart played when he was 13. My trio with Lovano and Frisell recently played in Italy. Lovano was reading a book about Enrico Caruso, so I asked the promoter if Caruso had sung where we were playing, and he said yes! The vibes in these places are incredible. Talk about inspiring…”

When recording and playing in New York, Paul Motian plays Gretsch drums, using a 20-inch bass drum, a wood snare, 8-inch x 12-inch and 9-inch x 13-inch ride toms, and 14-inch and 16-inch floor toms. He uses a 15-inch Paiste and a 15-inch K. Zildjian for his high-hat. A riveted 20-inch A. Zildjian, which he has used since the Evans Trio, and a 22-inch Paiste round out his cymbal complement. Unlike most drummers, Motian does not take any gear on the road, playing whatever is provided for him. He requests the specs of his own kit, and sometimes gets something close.