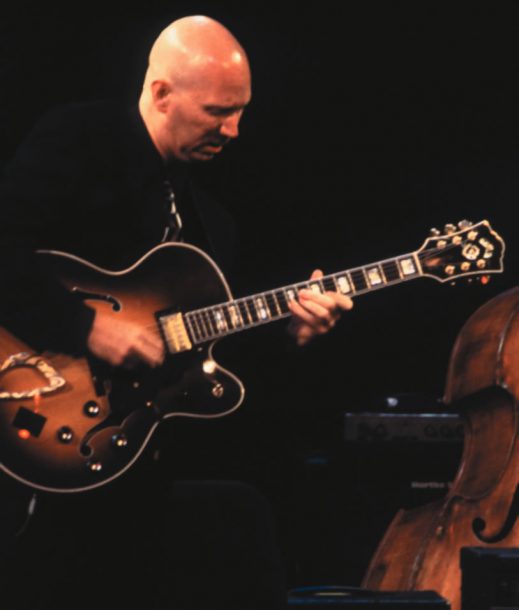 Paul Bollenback, a thinking person’s jazz guitarist with a clean ‘n’ fat tone and a barrel full of chops, has been impressing listeners as a sideman and, increasingly, as a leader in recent years. But inquisitive minds want to know: Is he mainstream? Left-of-mainstream? Or a work-in-progress? Probably all of the above. Bollenback has been heard alongside saxists Gary Thomas, Gary Bartz, and especially as a commanding, critical 1/3 of Joey DeFrancesco’s organ trio. But, more and more, Bollenback is breaking out as a leader, now with three CDs out under his name, on the Dutch-based Challenge label, including the latest, Soul Grooves.

For a programmatic focus, Bollenback decided to interpret old Motown tunes, including material by Marvin Gaye, Otis Redding and Stevie Wonder. “That was stuff I was into when I was a kid, listening to WNEW in New York,” Bollenback says. “Being a kid, I didn’t think much about what it was or why it did what it did. You just listen, and dig it.”

In a sense, the album is a continuation of his previous album, Double Gemini, but with a looser interpretive approach to the cover material. “With this latest record, I decided to go all out. So you might not recognize the stuff immediately.” “My Girl,” for instance, is reborn as a swinging tune in 7/4, but with its familiar melodic components intact.

Growing up just north of New York City, and then in Washington, D.C.-with a short, influential stint in New Delhi, India-Bollenback found himself lured away from rock and roll upon hearing John McLaughlin circa the original Mahavishnu Orchestra in the early ’70s.

“Hearing all the amazing chops and fire that John and that band had, it really turned me on. That led me to Miles, which led me to ‘Trane. I really didn’t start listening intensively to jazz until I was about 17. Then I heard a Best of Coltrane album, with ‘Giant Steps’ and ‘Cousin Mary’ and ‘Naima,’and I just loved it. For me, that was it.”