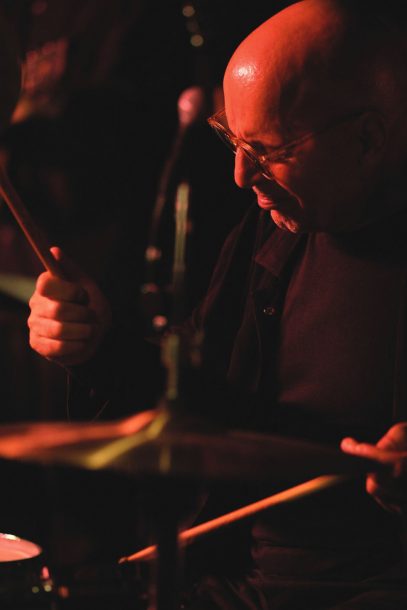 When the enigmatic yet clearly inspired trio of pianist Paul Bley (pictured), bassist Gary Peacock and drummer Paul Motian settled in for a gig at Birdland recently, their first gig together in New York City in several years, the subject was trio psychology, in this room, at this moment. All three players, together and apart and in assorted combinations, embrace the sanctity and the sensuality of The Moment. Some special alchemy occurs, however, with this particular grouping of players. Time gets massaged and dislodged, structures come in and out of focus, and you get the feeling that a real-time experiment is underway, its end result unknown to anyone, on either side of the stage.

Of course, it’s difficult to listen to this trio, which recorded the album Not Two, Not One for ECM in 1999, without peripheral comparisons to other mighty trios to which this one has familial links. Peacock’s 25-year role in the Keith Jarrett trio puts him in one of the highest-profile groups in jazz, and Motian’s similarly quarter-century-old trio with Bill Frisell and Joe Lovano has recently, and rightly, been elevated to status as one of the great groups in post-1980 jazz.

Yet different aspects of both players surface in conversation with Bley, a poetic troublemaker, turning 75 this November, who refuses to adhere to any particular rule set. At Birdland, Bley came bearing cane, recovering from a hip replacement but, as the cliché goes, his physical infirmity went away when he plunged into action at the piano. A set on a Wednesday night, within walking distance of the new Broadway glitz, had the effect of detaching us from the concrete specifics of time and place. It could have been an art gallery or a loft where free jazz ruled and intellects roamed, but it was in an uptown (well, midtown) jazz club. And why not?

Bley played the sort-of leader, the benevolent guidepost-tosser keeping the show in motion, or in suspension. Neither avant-garde nor straight-ahead, neither linear nor anarchic, the set unfolded in patterns involving enlightened guesswork and genre-defiance. Bley and company would brush past a skeleton of “All the Things You Are” that quickly dematerialized, a couple of bebop ditties that twisted into new shapes, and plenty of pieces that became unidentified musical flotation devices.

Peacock, who had just come off of a Jarrett tour, was the de facto leader by virtue of his name appearing first on the booking, and he played with a conspicuous boldness (and loud presence in the mix) that we don’t hear him generate in his more supportive voice in the Jarrett trio. Motian was himself: a master colorist who listens hard without sweating the details, and never feels obliged to lean more toward the swing-keeper rhythm task than his unique flair for sonic painting on a kit.

Best of all, the strong individual voices of the players were components in a grander meta-personality, the mark of a trio with something to offer the world. They really should go on meeting like this, with happenstance and the Moment Muse as their guide.