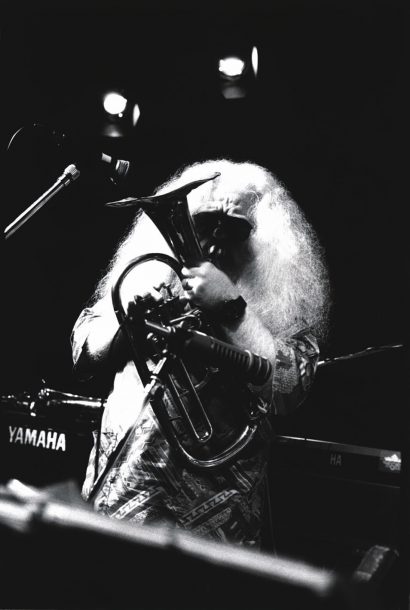 One nifty feature of the Allen Room (and the Rose Theater, for that matter) is that the stage can be modified to suit the show at hand. For Cyro Baptista’s Beat the Donkey Special Edition, the riser was removed altogether. The band played on the open floor, and demolished the notion that artistry and entertainment are competing, mutually exclusive values. Baptista’s crew emerged from the wings one by one in colorful garb, crouched like predators, twirling flexible tubes over their heads to create whirring, harmonized pitches. Some ascended the stairs into the house; the “fourth wall” between band and audience was immediately gone.

Gradually the players took their places and began an hour-long festival of percussion-centric music that stirred every sense. Part marching band, part anarchic circus troupe, but with the finely wrought cohesion of a top-tier orchestra, Beat the Donkey moved from thunderous ensemble passages to virtuosic solo features with splendid ease and polish. A vocal-percussion bit morphed into a tambourine circle that had the flavor of freestyle hip-hop. Two tambourinists then took off around the room playing sonic tennis with the beat. Nicholas Young performed an astonishing tap routine. Baptista employed pots and pans, berimbau and bird calls. With a pair of flip-flops, he beat out a slick melody on the old plastic pipes he had removed from his bathroom during a renovation. But conventional instruments enabled the group to rise above mere novelty and play songs. Guitarist Viva Deconcini, reedist Anat Cohen and keyboardist Brian Marsella became one with the clattering ensemble on tunes that evoked rock, samba, choro and even house music.

After intermission, the great (yet diminutive and, as you can see above, wild-haired) Hermeto Pascoal emerged, blowing a melody into a pair of Dasani water bottles, pausing to change pitches by taking small sips. He ventured a multiphonic reading of Khachaturian’s “Sabre Dance,” then switched to melodica for “Moonlight Serenade,” then to metal teapot for “‘Round Midnight” (sounding something like a muted trombone). Just when it seemed Pascoal might crack up before our very eyes, his band came on stage: Andre Periera Marques on Kurzweil keyboard, Vinicius Dorin on saxes, Itibere Zwarg on electric bass, Marcio Villa Bahia on drums and Fabio Da Silva Pascoal on percussion (plus an unbilled female vocalist). They began tearing into Pascoal’s engrossing, elaborate compositions. If Prokofiev wrote music for the Brecker Brothers, it might sound something like this. The lines were challenging, the harmony dense and advanced, the grooves often odd-metered and decidedly fusiony. Pascoal played compelling solos on melodica and DX-7, led some hilariously complicated call-and-response (the audience did surprisingly well) and, in Baptista-like fashion, had the band perform a beautiful segment using aluminum tubes on bricks.

Open for barely over a week, the Allen Room has already hosted an unforgettable show.