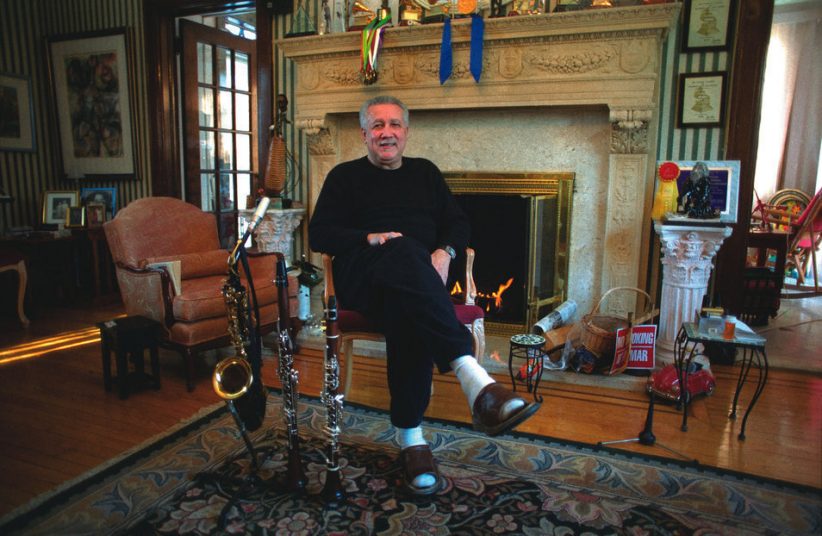 Cuban émigré Paquito D’Rivera said he came to find his stately three-story brick home in North Bergen, N.J., with the view of the Hudson River and Manhattan, “thanks to my love for old cars. I was riding my Volkswagen ’62 around [John F. Kennedy] Boulevard East and I saw a lady in a beautiful 1960 Mercedes two-door-sporty. Then I make a U-turn, I almost cause an accident. It was a Cuban lady. I said, ‘You want to sell me that car?’ She said, ‘No, but I want to sell you a house.'”

The woman, it turned out, had been hoping to meet D’Rivera to show him the house, while at the same time the musician had often admired the property during drives past it. The home had formerly belonged to a Cuban doctor who was also a conga player, D’Rivera explained. The doctor had died, and his widow found the place too big for her needs. Then came the chance meeting on what locals call “Boulevard East,” the thoroughfare that winds its way along the top of New Jersey’s Hudson County Palisades.

For D’Rivera and his wife, Brenda Feliciano, “the house is not too big, not too small. I have a space for my music upstairs, and playing pool downstairs. And I have my swimming pool when I’m here in the summer … and I have a beautiful view of Manhattan, close enough to the jungle. Very convenient.”

The couple had been living in a modest home in Weehawken that boasted an all-weather pool table in the backyard. And some time before that, D’Rivera, like many other musicians, had been living in Manhattan Plaza in Midtown Manhattan. “I was really happy in that building, but it was too small for me,” he said. However, his love of cars had D’Rivera relocating to nearby New Jersey. “If you like old cars, or new cars, if you own a car, New York’s not the place for you,” he said.

It’s probably no coincidence that D’Rivera’s home is also near Union City, which has one of the highest concentrations of Cuban émigrés north of Miami and where it’s not unusual to see New York Mets pitcher Orlando “El Duque” Hernandez visiting local restaurants along Bergenline Avenue (“Bergenline Avenue is like Miami with snow,” D’Rivera said with a laugh). “When I came to this country, my first residence was in Union City. More than 20 years later, they gave me the key to the city of Union City, which is like a temporary key to the city of Havana.”

D’Rivera’s love of cars is evident when you first enter the solidly built 80-year-old house, where a large collection of toy Volkswagen Beetles is in the alcove. A comfortable sunny living room with a baby grand piano and a fireplace mantle adorned with Grammys are just steps away. The home, though, is not without its quirks. “We have problems,” D’Rivera said, pounding a hand against the living room’s striped wallpaper, “putting the frames there, because this is concrete. Solid. To put a nail there, you have to call a specialist. They come with their drills.”

If the house is from another era, so is D’Rivera’s taste in cars. “I love cars in general, especially old cars,” he said. “I love the [Chevrolet] Bel Air ’57. My father took me to Amber Motors, when Havana used to be the beautiful city that it was, and they had this big window on the corner. And they had this blue Bel Air ’57 there. And I said, ‘Wow, what is that?’ Two doors, no post. Baby blue and a white top-what you call a hard top.”

On the other end of the automotive spectrum is D’Rivera’s love of the original Volkswagen Beetle.

“It’s contrast,” he explained. “I like contrast, you know. It’s like playing the saxophone and the clarinet. Same thing … the Volkswagen, you love it or you hate it, the same thing as the clarinet.

“I always loved the design of the Volkswagen. It fascinates me for some reason. I like the sound: eh-eh-eh-eh-eh. Only the engine of a Volkswagen sounds like that. I wonder why,” he said.

Even with the toy VW collection, and a lamp in his music room that features a model of the beloved Bel Air and makes the car’s sound when being lit, D’Rivera’s auto fanaticism isn’t too extreme, he pointed out.

“A friend of mine is so crazy about cars that he bought a repairman’s shop with the mechanic inside,” he said, adding that the terms of the purchase were explained this way: ‘I’m going to buy this from you, but you’re staying. You work, you can use my space now, but you have to take care of my cars.'”

Besides the obvious Cuban cuisine, with an emphasis on fish, D’Rivera said, “I like Indian food. Every time I go to England, where the food is absolutely terrible, we look for the Brazilian food or the Indian food, because they have a lot of Indian and Pakistani people there. I love hot, spicy food.”

“The Kite Runner [by Khaled Hosseini]. What a fantastic book. It is the best portrait of contemporary Afghanistan. It is a beautiful love story, but a love story between two men, two friends. You can have an idea of how people live there, how they have been at war for so long. First the Russians, and then the Taliban. I read the book in one day.”

If he couldn’t play music, D’Rivera said he would be a writer. When traveling, “I write on the plane. Usually I write funny stories and things like that.” An example of his skill with the pen can be seen in My Sax Life: A Memoir ($29.95/Northwestern University Press), a meandering anecdotal collection of his experiences that was originally published in his native Spanish and then in English with the help of editor Ilan Stavans. “You’ll notice, the book is written in a very jazzy way, a very improvisatory way, swinging back and forth, the same way that we play,” D’Rivera said. “Sometimes, I was so far away, that I didn’t know how to come back. ”

“Madrid. I love that city. Well, I love the country [Spain] in general. I am very well received there. I love the food and the friends and every city has something enchanting. Even the small towns. Really, it’s many countries in one.”

“Jeans. Any jeans. Plus, what they call the Moody suit. The jogging suit. We call it the Moody suit because [James] Moody travels with that only. I gave to him once a guayabera, a Cuban shirt. Then he sent me back a Moody suit. He looks so good in that [Moody suit], it looks as though he was wearing it all his life. Even on the stage. He wears those on the stage and he looks elegant.”

If you could say anything to Fidel…

“I don’t think you can publish that.”