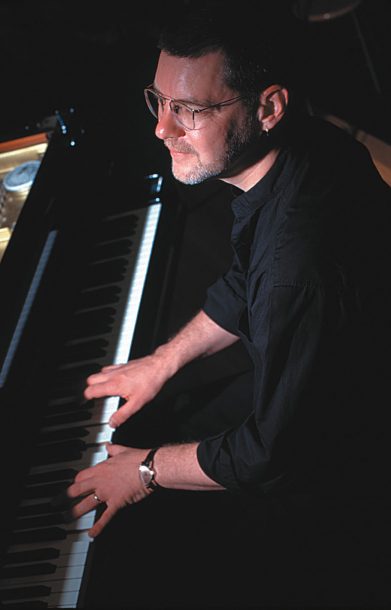 This Jazz at Lincoln Center event, subtitled “As of Now,” showcased two of the most popular jazz big bands, both led by talented composer-arrangers.

Schneider band opened with “The Worldly Master,” and its dense harmonies spread across the entire band, moving in block-chord fashion. Baritone saxophonist Scott Robinson and trombonist Rocky Ciccarone soloed, the latter showing an Urbie Green-Bill Watrous influence. Guitarist Ben Monder’s distortion-laced solo ended the piece on a fade-out. The 18-piece group played Schneider’s challenging polyrhythms and shifting harmonies if not with flying ease then with great technical competence and feeling for the music. The band has the rare ability to fight its way through Schneider’s toughest material, bringing her charts to glorious life in the process.

The next performance was Schneider’s ambitious three-movement, Brazilian-influenced suite, Three Romances, commissioned by the University of Miami. A Brazilian percussionist from Akiyoshi’s orchestra, Valtinho, joined Schneider’s band for this piece, while her regular percussionist, Jeff Ballard, played with his hands on drummer Tim Horner’s floor tom. Horner firmly propelled the band with clave-based patterns, and set up lengthy horn passages with precision fills. Pianist Frank Kimbrough and bassist Tony Scherr filled out the rhythm section, which is a formidable crew of New York modernists.

Soprano saxophonist Charles Pillow sketched querulous phrases in front of Schneider’s elaborate backdrop of syncopated muted horns on Three Romances’ first movement, “Choro Dancado.” Trumpeter Ingrid Jensen led off the balladic second movement, “Pas de Deux,” with a solid flugelhorn solo, proving she has stage presence along with excellent brass skills. Pillow returned to the fore and he and Jensen briefly traded as the song came to a close. The third movement, “Danca Ilusorio,” described by the composer as a foxtrot augmented with Brazilian elements, featured strong solos by trombonist Larry Farrell and tenor saxophonist Richard Perry. Three Romances impressed me twice over, first with the soulful complexity of the writing, and again with the vibrant accuracy of the band’s performance.

Next, Schneider’s band played a new piece commissioned by Jazz at Lincoln Center. This piece seemed to connect with Spanish flamenco music in much the same way that Three Romances connects with Brazilian music. Schneider is no stranger to the jazz-flamenco hybrid: In 2000 she conducted Gil Evans’ Sketches of Spain at Carnegie Hall, with Jon Faddis in the Miles Davis role.

Horner steered the orchestra’s way through the challenging chart, which is chock-full of shifting chords and unpredictable phrases. The work incorporates three fundamental dance rhythms: buleria, solea and tango (the last is not to be confused with the Argentinean tango). Building on the rhythm of a box drum that Ballard played by beating and scraping its sides, Schneider filled in the harmony with rhythmic horn phrases. At one point, tenor saxophonist Donny McCaslin got the crowd excited with a solo that he started with a series of tremolos. The audience and musicians alike were exhilarated when the piece concluded, and Schneider received a standing ovation.

After a short intermission, Akiyoshi’s band assembled onstage. After an abbreviated version of the band’s swinging theme, “Long Yellow Road” (from the 1976 album of the same name), the orchestra played “Desert Lady Fantasy,” a composition by Lew Tabackin, Akiyoshi’s husband, as well as the band’s featured soloist, on tenor saxophone and flute.

The piece drew inspiration from a Japanese folktale about a girl who lives in a sand dune, Akiyoshi explained, however in her arrangement she went for an East African flavor. After opening with Tabackin’s fine modal flute, trombonist Steve Armour took over for a solo that addressed the full range of his Conn. I was hoping that outstanding trombone soloists John Allred and Pat Hallaran also would be featured, but had to settle for enjoying their outstanding section work.

Next, Akiyoshi led the band through her own Lincoln Center-commissioned piece, and the purpose of the colossal Japanese ceremonial drum-a kakko (pronounced “tai-ko”)-that had graced the back wall of the stage was revealed. As Akiyoshi explained, she wanted to do something to celebrate the “Year of the Drum,” and when the folks at Lincoln Center agreed to pay for both the kakko, and the right person to play it, the die was cast.

Playing the mammoth drum obviously requires lots of upper-body strength. With sticks resembling small baseball bats, holding his arms over his head to reach the skin of the high-mounted drum, master kakko player Masakazu Yoshizawa pummeled the behemoth with repetitive eighth-note rhythms. The drum issued a booming sound that all but obliterated the sound of the band. A drum this size, in earlier times, was probably used to communicate between distant villages, or send signals on the battlefield. You not only heard its sound but felt it in your gut.

The first movement began uneasily, with Yoshizawa’s martial pounding starkly juxtaposed with Akiyoshi’s swing figurations. The atmosphere improved during Rotondi’s excellent Freddie Hubbard-inspired solo excursion. Scott Robinson also soloed well, exploring the upper reaches of his baritone saxophone. (Robinson held down the bari chair in both bands, making Valtinho not the only musician to do double duty on the night.)

The second movement opened with Yoshizawa playing tzuzumi, a handheld Japanese drum with a light sound. This introduction led into superior ballad playing by Tabackin that was close in spirit to the finest of Ben Webster or Paul Gonsalves. The third (and last) movement proffered straightahead swing on the time-honored changes of “After You’ve Gone,” and featured a brief piano solo by Akiyoshi. The movement was capped by choruses of fours and then twos by saxophonists Tom Christensen, Jim Snidero and Dave Pietro. Pietro, especially, got the audience going with his burning alto playing à la Phil Woods.

A duet between Tabackin and Yoshizawa ensued, in which Tabackin tried his best to conquer the mighty drum with Coltranesque overblowing. The piece then climaxed, and boomed toward its grand finale in which the kakko was made to swing-sort of. Concerto for single gigantic drum? Hey, why not.

Acknowledging the foreign-policy crisis over Iraq, Akiyoshi closed out the night with “Epilogue” from her recently released suite Hiroshima Rising From the Abyss(True Life), which is dedicated to the city’s atomic-bomb victims. The piece opened with wonderful muted-brass chords, and eased into a regal, Louis Armstrong walking groove. Tabackin, on tenor, was the featured soloist for this condensed but potent set-closer.

Throughout its set, Akiyoshi’s band thrived on the inventive drumming of Andy Watson and the swinging support of bassist Paul Gill. Akiyoshi’s orchestra offered a broader range of soloists, and had slightly more spit and polish, but Schneider’s was the more adventurous musically. Call it a draw between two excellent bands with visionary leaders.