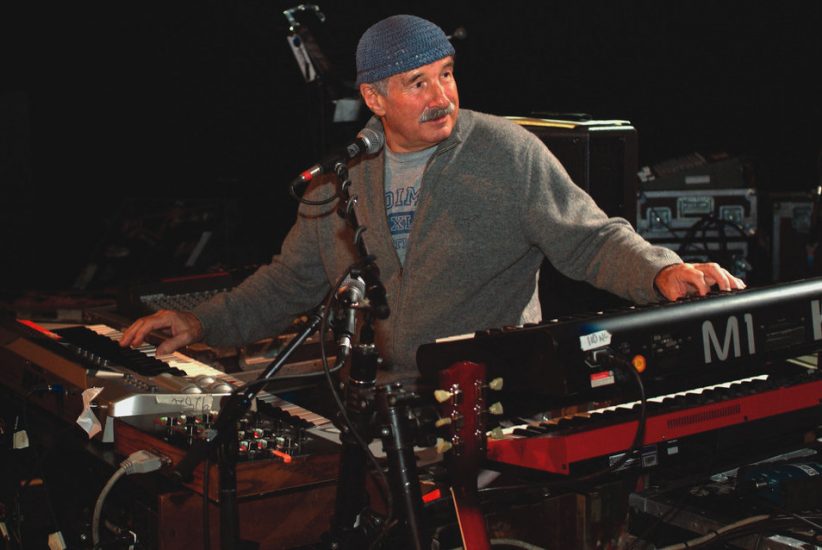 Things are coming together for Joe Zawinul of late, even despite him not having a U.S. record deal and his distinctive musical amalgam has no easy route to radio. Within one week in January, Zawinul’s new album, Faces & Places (ESC) earned a Grammy nomination and he was inducted into the Hollywood’s Rock Walk along with Herbie Hancock.

All of this provided a backdrop of added expectancy when Zawinul played in his “hometown” at Catalina Bar and Grill. Although he has lived in Los Angeles for most of the last 30 years, Zawinul usually draws his musicians from elsewhere and he hasn’t played locally in a few years. His last scheduled stint, at Catalina two years ago, was cancelled after a brown recluse spider bit him while Zawinul was clearing his property in Malibu. Tonight’s gig was a ripe setting for a triumphant homecoming, and the band played accordingly: kickingly and poetically.

Zawinul’s band eased into a blast of rhythm for late set, introducing the potent groove imperative–but on their bandleader’s terms. Those terms include accessing different cultural colors in the music and keeping things open–in terms of what constitutes a solo, and also where the structure of a tune might wander before coming in for a tight landing, often on a syncopated unison line. Part of the charm in watching Zawinul has to do with his organic keyboard chops–which flowed like liquid heat or simmered artfully–and his band-leading style, as he plays the band’s dynamics with an ever-watchful gaze.

Once invited to join the Vienna Boys’ Choir, Zawinul has had a long-held belief in the importance of vocal elements. If the current band is all about tending a mighty, mysterious groove, it’s also rich in voices: four-fifths of the band contribute vocally, including Zawinul’s own gutsy and electronically colored singing. Stirring vocal outings also came in from different world traditions, from the intricate Indian passions of guitarist Amit Chatterjee to Cameroonian bassist Etienne Mbappe’s soulfulness on the tune “All About Simon.”

Dazzling in a more upfront way is vocalist Sabine Kabongo, who performed the sinuous “Café Andalucia” from Faces & Places. She also offered a limber, ear-opening take on “Come Sunday” in a duet with Zawinul that found him tapping into the spiritual essence of two of his acknowledged heroes: Duke Ellington and Thelonious Monk. Formerly of Zap Mama, Kabongo brings a fresh intelligence and necessary flexibility to the band, handling Zawinul’s odd lines and loose song-building approach. “As long as we can afford her, we’re going to have her,” Zawinul joked when introducing the band.

Zawinul’s own sound palette, coaxed from his wraparound command post of keyboards, is continually evolving. This night, he leaned on his Korg Prophecy to play sounds resembling distorted electric guitar, harmonica and a tweaking quarter-tone synth sound. The band also acknowledged Zawinul’s Weather Report past, not with a popular confection like “Birdland” but rather the angular beauty “Two Lines,” from the band’s underrated Procession album.

At 70 and going strong, Zawinul is in fighting form these days, with a nicely integrated band that takes in the world while creating their own. Heard in Hollywood, they lit the place with inspiring, category-defying creative fire.