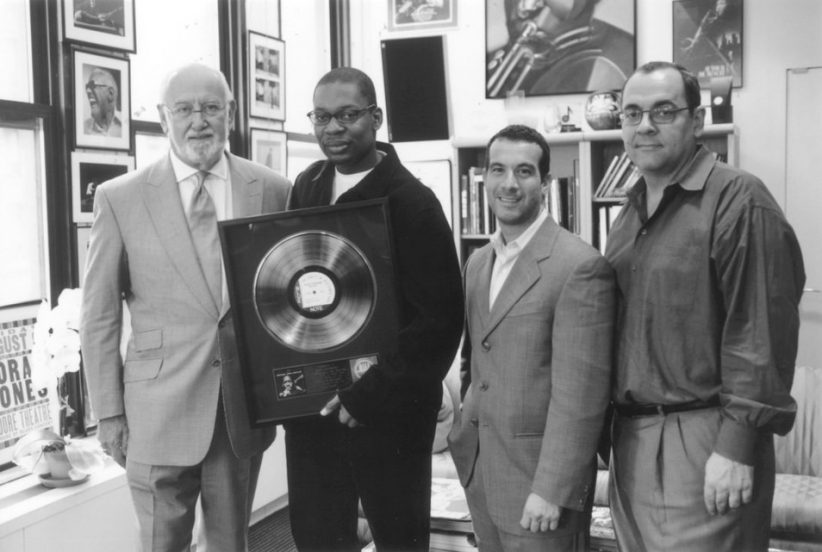 John Coltrane’s wrenching performances and extended solos have become so glorified in American culture that tributes to him and his music can teeter on obviousness–sometimes cynicism. But when Coltrane’s wife Alice and son Ravi got together at Joe’s Pub to honor John, they highlighted the majesty of his music, summoned the spirit of the saxophone-sage and created what Trane’s feverishly furious playing almost always did: incalculable beauty.

Writer Ashley Kahn introduced the performance by expressing gratitude to the Coltranes for contributing interviews and insights to his new book, A Love Supreme: The Story of John Coltrane’s Signature Album (Viking Press). After Kahn’s charming checklist of thank-yous and a half-dozen “Love Supreme” chants from anxious audience-members, the sharply dressed Ravi, bassist Darryl Hall, drummer E.J. Strickland and pianist Luis Perdomo stepped from backstage. The quartet, with Alice waiting in the wings, powered through peppery ballads, including “Wise One” and “High Windows,” and then jumped generations and genres to John’s “26-2.” The band treated the tune with hyperactive hiccups, half-honking harmonies and the kind of high-register heroics that Trane juiced from his horn with more urgency and intimacy than his son does. Ravi takes time insisting themes, whereas John jumped from jovial to explosive like a rocket on its meteoric rise from earthly planes to heavenly heights.

Ravi then introduced Alice: “I thank her for my whole life and for everything she’s done for me. It’s my supreme pleasure and honor to invite my mother, Alice Coltrane, on the stage.” The crowd’s ovation and enthusiasm were obligatory but sincere, as Alice, in a flowing orange Punjabi dress and sweet staccato voice, declared, “One of the greatest things about New York is that there’s so much art here. We’re all very lucky.” In response to Ravi’s whispers, she then added, “What? Whatever you want me to play,” and the band was off.

At 65 years old, the hunched heroine swayed back and forth on the bench as she initiated a sprawling introduction to “Acknowledgment,” the first of four compositions in John’s signature suite. Hall hummed the tune’s mantralike bass line through his instrument only, passing on the vocal version that Coltrane and Garrison groaned with grace, and in unison, on A Love Supreme. Alice, after trotting through choruses with choppy chords, entered her solo by phrasing and rephrasing Ravi’s last lick with the kind of ascending three-note variations that John’s known for. After her solo–highlighted by Strickland’s cymbal-crashing clarity and mallet madness–Alice wrapped her robe tightly around her shoulders and leaned toward the audience with a gracious grin that met all of ours.

Hall and Strickland, heated by Alice’s quick chords, plucked solos with lean lyricism throughout the performance, avoiding the fatty excess that some Trane tributers confuse for flattery. Soloists at Joe’s Pub balanced blazing speed with rich harmonic ideas, creating sheets of sound that differed from John’s because these performers tucked corners and ironed wrinkles. The group’s bedtime ballads–mostly Ravi’s originals–impressed almost everyone in attendance, it seemed, but left most of us aching for more. Alice sneaked offstage after “Acknowledgment,” the set’s lengthy but lone tribute to A Love Supreme, and returned the spotlight to Ravi for another edgy editorial. The group focused mainly on honoring John’s suite thematically rather than sampling his album’s music explicitly, or in its entirety.

For years, the Coltrane name has both popularized and pigeonholed Ravi, blessing him with family legacy and burdening him with unattainable standards. But with transcendent strides, and at a steady musical clip, Ravi played proudly, personally and poetically, displaying the kind of musical autonomy that his father lived for throughout his life.