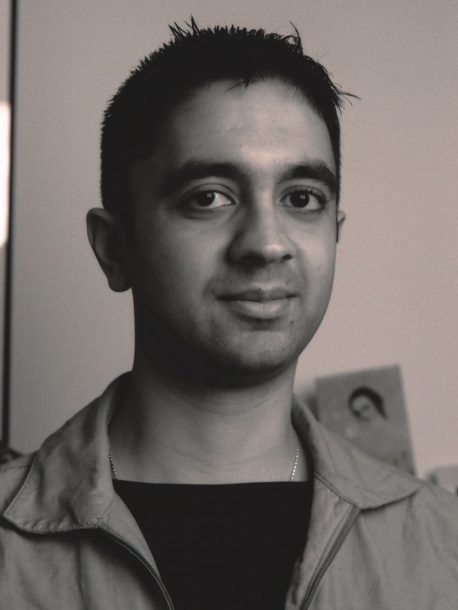 The airport has always been the ultimate interstitial space. Less a space, in fact, than a system: a nexus of identities, a snapshot record of movements. Accordingly, Vijay Iyer and Mike Ladd’s new song cycle “In What Language?” doesn’t occupy the space of an airport so much as appropriate its machinations. To witness this multimedia spectacle in performance is to absorb the thrumming pulse of passports, boarding passes and x-ray baggage scans.

The catch, and the motivating principle of the piece, is that the modern airport can also be an instrument of scrutiny, challenging the fabric of identity and even the very notion of self. Iyer conceived the piece, which was commissioned and produced by the Asia Society, as a response to an incident involving the Iranian filmmaker Jafar Panahi. In the spring of 2001, Panahi was traveling from Hong Kong to Buenos Aires on a film festival circuit when a routine layover at New York’s John F. Kennedy airport set off a humiliating sequence of events. (The director was shackled to a wooden bench for 10 hours, then deported back to Hong Kong in cuffs.) In a widely circulated email composed after the fact, Panahi wrote that he wanted to protest the actions, proclaim himself “just an Iranian, a filmmaker. But how could I tell this, in what language?”

For Iyer, the cycle’s composer, and Ladd, its librettist, that language is fluid and multivalent, in a perpetual state of becoming. Comprised of 18 vignettes, “In What Language?” approaches its subject from nearly as many different perspectives. Ladd’s verse assumes the narrative voices of immigrants, expatriates and transients. Iyer’s music, scored for as many as nine musicians, similarly sounds a chord of displacement, with its insistent odd meters and melting-pot assemblage of sounds. A wall-sized screen behind them glows with a flickering projection of runways, terminals and moving walkways–all in a disorienting slow motion, and often with grainy resolution.

In the cycle’s opening movement, “Airplane,” Iyer plays an ethereal cascading triplet figure on the piano as Ladd recites a sly declension of word-pairs. Grim humor punctuates a stanza like “Force Forum / Morse Code / Rosetta Stone / Bomb.” That tension between darkness and light continues in the following piece, “The Density of the 19th Century.” Ladd and three other performers speak their long-flowing lines in a kind of overlapping collage, as drummer Trevor Shaun Holder whips up a barrage of frenzied breakbeats. “In the pursuit of a universal truth,” contends Latasha Diggs, “history has become the recording of echoes, of the hollow of absence, of the missing.” As in the best of the hip-hop-inflected spoken-word genre, rhythm underscores meaning; “flow” is a mode of performance at once literary, visual and musical, and it serves as a tonal accompaniment to the subject matter at hand.

Although work on the project began before September 11, 2001, that date’s reverberations echo unavoidably throughout the piece. Yet Ladd and Iyer seem determined to avoid the dual urges of elegy and homage. Despite the many aeronautical references in “Language,” there isn’t one mention of the airplane’s recent function as a weapon. And most of the piece’s 9/11 references convey the feeling of a sidelong glance. “Smoking Section” fleetingly references the airborne sleepers “who realized before any catastrophe that in-flight space is not neutral.” Another piece, suggestively titled “Taking Back the Airplane,” is actually a love poem of sorts, tenderly voiced by Allison Easter and underscored with a weightless groove in 7/4. (“I have dreamt of our families,” she says at poem’s close, “shipped through this sky.”) More recent global conflicts resonate in a piece like “Iraqi Businessman,” in which Ajay Naidu muses on “all the thugs that we endure.” In case there’s any question about the cultural ubiquity of these oppressors, the wall behind him glows with a projection of an airport monitor showing footage from Basra. (The screen shows the CNN logo and a header: “Oil Flowing Again in Southern Iraq.”)

Music, language and image are virtually inseparable throughout the 90-minute piece, and Iyer and Ladd deserve particular praise for an obviously painstaking yet effortless-seeming marriage of sound and word. Iyer’s compositions variously incorporate structural elements of South Asian and West African music, alongside more familiar aspects of jazz and funk. Ladd’s verse matches Iyer’s music in a manner so natural as to be unassuming; the 5/4 time of “TLC,” the suite’s most lighthearted piece, is matched with a rhythmical cadence borrowed from Ladd’s tabla studies. Everything fits, puzzle-piece tight. Yet there’s some room, at least, for improvisation: the piece accommodates solos by Iyer, saxophonist Rudresh Mahanthappa, guitarist Liberty Ellman, and valve trombonist Dana Leong. Credit also goes to Rachel Dickstein, whose reigned-in but powerful stage direction lend the cycle an experimental theatrical feel.

“If there’s no language to explain,” Ladd writes in the work’s title segment, “at least a word or grunt.” Thankfully his and Iyer’s effort produces no such primitive expressions. If the modern airport serves a dehumanizing purpose, “In What Language?” animates the all-too-human struggle.