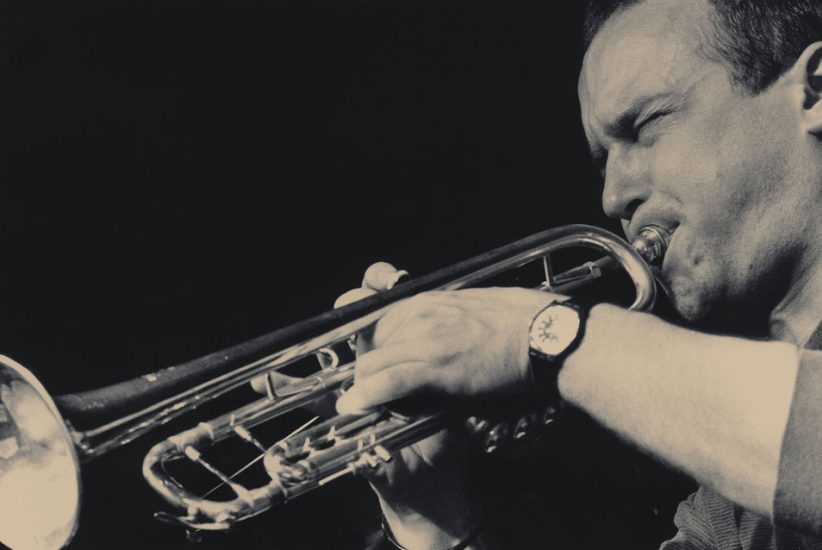 “Thank you for tearing yourself away from CNN during this terrible time,” said Dave Douglas at the microphone, with apparent sincerity. “We’ll try to do something positive here.” This was March 25: the day after Douglas’ 40th birthday, and almost a week into the war with Iraq. And “something positive” was certainly on the verge of materializing, as the trumpeter mounted a mid-career retrospective over the course of this engagement. Spanning six days and incorporating 10 separate bands, the cumbersomely titled “Dave Douglas 40th Birthday Celebration Week” simultaneously showed the range of Douglas’ imagination and the laser-like focus of his vision.

Festivities began with the Tiny Bell Trio, one of Douglas’ earliest ensembles, and one of his most distinctive. Consisting of Douglas, guitarist Brad Shepik and drummer Jim Black, the band manages a tightrope walk between poetic minimalism and eclectic frenzy. “Scriabin” opened the set in plush waltz time, with a tender essay by Douglas in mid-register and richly voiced accompaniment by Shepik. Then the group revisited one of its first standards, the Balkan-tinged “Red Emma.” That song’s insistent 9/8 cadence lends itself perfectly to the group’s elastic virtuosity, and it evoked strong solos all around; Black’s statement in particular, encompassing a range of textures and roving in and out of time, was a high point of the night. Other highlights included a Shepik-Black duet on the following tune (incorporating flat-out rock distortion and breakbeat double-time); a gorgeously textural treatment of a theme by Robert Schumann, with lovely work by Douglas; and the set closer, which moved from a fragmentary head to a ferocious open section, careening briefly (and spontaneously?) through Joe Zawinul’s “Directions” before circling back home. On every tune it was clear that the Tiny Bell Trio, despite a long absence from the bandstand and a combination of strong musical personalities, still functions first and foremost as a band. (It was tempting to compare their performance with the reunion of another three-piece, the Police, two weeks prior. Tiny Bell sounded much better, and seemed less likely to throw punches after the gig.)

Parallel Worlds, another of Douglas’ longer-running projects, personified a different brand of collectivism the following night. Known alternately as Douglas’ “string group,” this ensemble features violinist Mark Feldman, cellist Erik Friedlander, bassist Drew Gress, and drummer Michael Sarin. Their set began with a pointillist call-and-response that segued into a swinging blues; Douglas delivered a mournful essay, followed by Feldman in a hard-swinging mode. The following number included a pitch-perfect cello solo by Friedlander, encompassing pizzicato arpeggios, minor-key runs and exclamatory bursts. Then the group performed a medley of miniatures, beginning with “Invasive Procedure” (a tangled knot of odd meters and jangly stop-times) and culminating in a shuffle that seemed almost Ellingtonian in its richness of timbre and buoyancy of swing. From start to finish, their brief set reflected Douglas’ clear compositional voice, even as it accommodated strong solo statements from within the group. Theirs is a chamber aesthetic, which is not to say “classical”; in any case, the group performed cohesively and with a sense of alluring mystique.

Those qualities also marked the bearing of Witness, which supplemented the string group with vibraphonist Bryan Carrott and clarinetist Chris Speed. Although Douglas has declared this ensemble a tribute to political protest in the arts, he made no such overtures onstage (except in a purely musical sense). The ensemble opened with its namesake track, penned in dedication to the Middle Eastern scholar Edward Said. Evocatively multilayered and unpredictable in its evolution, “Witness” offered a perfect distillation of Douglas’ loose-tight aesthetic. “Woman at Point Zero,” a hauntingly fragile minor-key melody featuring trumpet and clarinet in unison, offered a glimpse at Douglas’ well-tended lyrical side. And a final, somewhat Latinized fanfare ended the set on an urgent note. As an exercise in collectivity with a purpose, Witness is one of Douglas’ most fully realized efforts. It seems unlikely, given the musicians’ wildly divergent schedules, but one can only hope that this group might yet go out on tour. (Douglas did take a Witness band on the road in 2001, but with different personnel and a more electronic focus; it served as a precursor to Douglas’ MI>Freak In Septet.)

Based on the evidence above, it would be safe to characterize Douglas’ musical universe as carefully calibrated and circumscribed. That’s true, to a great extent. But the trumpeter is hardly averse to risk-taking without a net, as two of the week’s other ensembles can attest. The first, Four in One, followed the Tiny Bell Trio on opening night. On the surface, it’s a conventional jazz quartet: trumpet plus rhythm section. But at the group’s chewy center are pianist Misha Mengelberg and drummer Han Bennink, European avant-garde legends and the heartbeat of “New Dutch Swing.” As on the group’s eponymous 2001 debut (Songlines), their common language here was Thelonious Monk; attentive listeners caught snatches of “Misterioso” and “Epistrophy” in passing, and Mengelberg’s own “Kneebus” is a translation of Monk’s “Just You, Just Me.” But the interplay of the group is wildly unpredictable, even if its signpost is swing. “Hypochristmutreefuzz,” another Mengelberg tune, applies cascading 16th notes to an uptempo bop head-it sounds simple enough, but in performance it grew spiky and abstract. And this is to say nothing, or very little, about the zany showmanship of Bennink, on Black’s drum kit: At one point he carried the snare drum to the front of the stage, and played a solo punctuated by spoken ejaculations and arrhythmic foot-stomping. (For this gig, he apparently left the clogs at home.) Against this self-consciously crazed backdrop, Douglas and bassist Brad Jones were pillars of reason; it was this tension between chaos and order that made for such a captivating set.

Conversely, the general absence of such tension rendered Alloy, on the following night, a flatter experience. Not a bona fide Dave Douglas band so much as a noble experiment, Alloy trafficked in free-improvisation-and true to form, Douglas had enlisted ideal collaborators for this purpose. Trumpeters Baikida Carroll and Roy Campbell have both been involved with various branches of the jazz avant-garde since the 1970s, and both have recorded significantly in the past few years. But the three trumpeters, onstage together, rarely acted in a concerted, or even contradictory, effort. Despite the band’s nomenclature, the only real alchemy of this set took place in the rhythm section. Vibist Bryan Carrott, bassist Mark Dresser and percussionist Susie Ibarra functioned as a unit in texture and time, managing airtight interplay even in the absence of thematic material. But their achievement, which worked brilliantly behind each individual trumpet soloist, couldn’t serve as a substitute for real coherence within the full group.

Fortunately that attribute was evident on the gig’s final night, as Douglas introduced his Septet, which released its debut recording Freak In (Bluebird) earlier this year. Formally, this ensemble promises innovation: The lineup includes Douglas with tenor saxophonist Seamus Blake, keyboardist Jamie Saft, electronic percussionist Ikue Mori, bassist Brad Jones, drummer Derek Phillips, and guitarist David Gilmore. (On the album, the latter two spots were filled by Joey Baron and Marc Ribot.) Their set began with a bang, as the title track fused hard-driving jazz-rock with the kinetic overdrive of a drum ‘n’ bass anthem. “Culver City Park” was a subtler offering, with Gilmore’s acoustic fingerpicking lending an organic touch. “Porto Alegre,” with its dream-sequence synthesizer and melodic long-tones, sounded a yearning note. “Eastern Parkway” began with a dizzying succession of whooshing and twittering sounds from Mori’s Powerbook, then settled into a postindustrial second-line groove. Douglas’ solo on the tune included a passing nod, somewhat incongruously, to “Royal Garden Blues”; later, Gilmore employed that signature turn of phrase as the functional motif of his own rock-leaning solo. And Saft, looking the part of a postmodern Rasputin, teamed up with Mori in a keyboard-laptop duet that obscured more than it revealed. It was an impressive close to the set, and a vivid demonstration of the group’s potential. At the same time, there were limitations: Douglas’ group mostly adhered to the head-solo-solo-head formulation of standard jazz (as opposed to the more collective enterprise of fusion at its best), and the electronics often seemed little more than an appendage. In this way, the Septet seems safely grounded in the “jazz tradition,” however obliquely.

It’s a clear testament to Douglas’ capacities that this expansive review accounts for only half of the week’s music. I missed sets by Charms of the Night Sky, El Trilogy, and the Sextet and New Quintet. (Past experience has shown that each of these ensembles yields treasures of its own.) By the end of the week, the trumpeter was fairly aglow with the measure of the week’s success. He mentioned the gifts that he’d received over the course of the week, both literal and musical, and jokingly alluded to gifts that he should have received but hadn’t. More seriously, he noted that a portion of the proceeds from the engagement would be dedicated to the Jazz Musicians Emergency Fund. “They say it’s better to give than to receive,” he said. Over the course of this special engagement, Douglas had managed to do both.