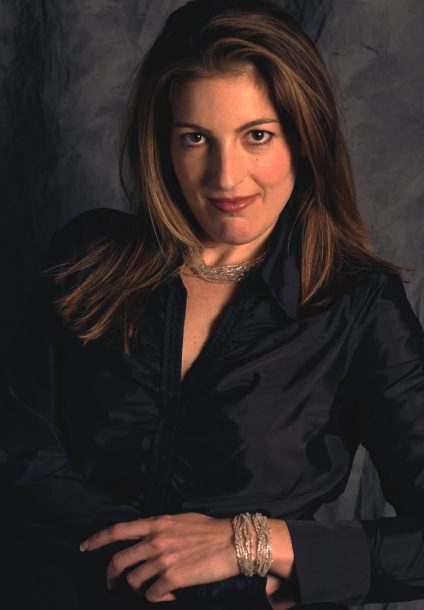 Based on her debut album, The Very Thought of You, it’s hard to imagine where in the world Orna hails from. Is she Brazilian? Southeast Asian? Perhaps southern European? Actually, the singer with the lyrical name (derived from the Hebrew word for “light”) and intercontinental appeal was born and raised in Johannesburg, where, she recalls, “I grew up listening to Chopin and Gershwin. My mother was a piano teacher and a musician, and I started begging for piano lessons at age five.”

Though she remembers being “quite into singer-songwriters like Elton John and Billy Joel,” classical training took precedence. Earning a music degree from the University of the Witwatersrand, she set her sights on a career in film scoring and determined that Berklee was the best place to continue her studies. Oddly enough, Orna considers her decision not to train as a vocalist crucial to her subsequent success. “Being at Berklee and not being caught up in the whole singer thing was, I think, where I got my musicianship from, which enables me to now lead my band and write my own charts. I loved doing film scoring, but realized it has to be your passion. You have to eat, sleep and breathe it. Instead, I was feeling that passionate about jazz singing. I knew I had to move to either New York or Los Angeles. I’m not a New York person, I just do not appreciate the weather, so I chose L.A.”

Two years of increasingly high profile club dates with pianist Tom Zink and drummer Chris Wabish brought the Astrud Gilberto sound-alike to the attention of producer/bassist Brian Bromberg, who lured her to Chicago’s fledgling A440 label. To shape her first album, Orna says she simply “picked all the songs from my repertoire that I felt passionate about. We added “Ornithology” because one of my teachers at Berklee used to call me Orna-thology.'”

Apart from “Ntylio, Ntylio,” a haunting Xhosa lullaby originally made famous by Miriam Makeba, the bulk of the album is devoted to dreamy ballads like “My One and Only Love,” “That’s All” and the title track, leading one to speculate that Orna is a dyed-in-the-wool romantic. “I’m afraid that’s true,” she laughs. “Is it really that obvious?” She’s also deeply appreciative of Zink and Wabish’s unstinting support. “I am so blessed to work with such wonderful, wonderful players. I’m very humbled by them. Every opportunity I’ve had to grow is a result of what they’ve shared with me.”