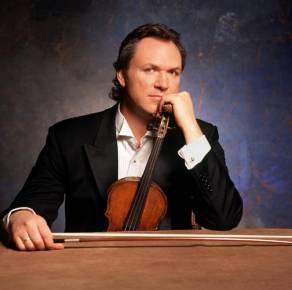 When fiddle virtuoso and composer Mark O’Connor recalls the history of his Hot Swing Trio-how it began as a tribute to Stephane Grappelli and Django Reinhardt before evolving into something reflective of his own cross-genre musical journey-he is certain of one thing: Grappelli wouldn’t have had it any other way.

“The biggest lesson I learned from Stephane is that he could take something and make it very individual to him,” says the 48-year-old Grammy winner, who was still a teenager when he began touring with the maestro in the late ’70s. The Seattle native was recruited for his guitar skills, but Grappelli also enjoyed playing violin duets with O’Connor, already an accomplished exponent of Western swing. “I was sort of like a mini-Stephane when I met him,” says O’Connor, calling from his Manhattan apartment. “It was not like I was starting from scratch. I already had my own style. He recognized that and he celebrated it.”

The two musicians had a great deal in common, O’Connor recalls, yet the differences proved as important as the similarities, if not more so. “We both had classical training and enjoyed jazz, but the spices in his music, if you will, included Gypsy music, the tango and French cabaret, where he grew up in the ’20s. The secret ingredients of my style were a different set of cultural inflections: blues, bluegrass and Western swing. So we each had these five ingredients: two things we shared, and three that were different.”

Live in New York, the trio’s latest recording, is a vibrant reminder of O’Connor’s swing, folk, blues and classical influences, and, as it turns out, a final hurrah. Released on the fiddler’s own OMAC label and again featuring the powerhouse pairing of guitarist Frank Vignola and bassist Jon Burr, it completes a trilogy of CDs that includes 2001’s Hot Swing! and 2003’s In Full Swing.

O’Connor writes and arranges for the trio, yet he’s quick to note that the group’s fundamental appeal has to do with sheer swing chemistry. “The rhythmic power is something I could never write,” he says. “It’s something that’s in those guys. They bring it to the stage and to the recordings. It’s like fireworks-the most important part of the group.”

Deciphering the Grappelli code was one of the great challenges O’Connor faced coming up. He had little difficulty emulating violinist Joe Venuti’s brand of unflagging swing, having closely studied his recordings, and he found himself in sync with fiddler Stuff Smith’s visceral blues attack. But Grappelli’s touch and technique remained elusive.

“It wasn’t until I began playing with him that I began to figure it out,” says O’Connor, who was puzzled by Grappelli’s phrasing and his use of vibrato and the bow, no matter how often he listened to his recorded collaborations with Reinhardt.

“I had played twin violins with a lot of players before that,” O’Connor recalls. “I thought I was good at copying people’s phrasing and acting as a subordinate harmony player, but it took me a while to figure out how to keep up with him just to play a tune. There were different mysteries, and it was the combination of them that was so hard to crack.” No question, he adds with a laugh, “there’s nothing like being up close.”

O’Connor has spent much of his professional life returning the favor. Given his innumerable musical pursuits of late-collaborations with Yo-Yo Ma and Edgar Meyer and the debut of his “Americana Symphony”-it’s amazing that he’s able to carve out so much time to mentor students at his popular string camps, at the Mark O’Connor String Institute at UCLA, and in other settings around the world.

Several years ago, O’Connor invited Claude Williams, the late swing-era fiddler saluted on Live in New York, to participate in one of his string camps. “I didn’t know if he was into teaching, but I thought it doesn’t matter. He’s a legend and he should be there,” O’Connor says. “And it was a great call. So many kids were able to be around him. Whenever he’d pick up his violin, it was like a history lesson.”

O’Connor is also working on an American violin method course, a unique and comprehensive program of lessons designed to take students from initial to advance levels of study. Don’t rush to Amazon just yet, however: He’s still trying to figure out whether to release the course in installments or “to finish the whole thing so that someone can see the entire arc.”

And there are more swing collaborations on the horizon. While Live in New York marks the final recording for the Hot Swing Trio, O’Connor will soon be fielding a larger swing ensemble featuring guitarists Vignola and Julian Lage, among other musicians. Indeed, the fiddler is looking forward to bringing the group to the Kennedy Center in the nation’s capital early next year to celebrate the Django Reinhardt Centennial. Not a bad way to embark on yet another jazz adventure.