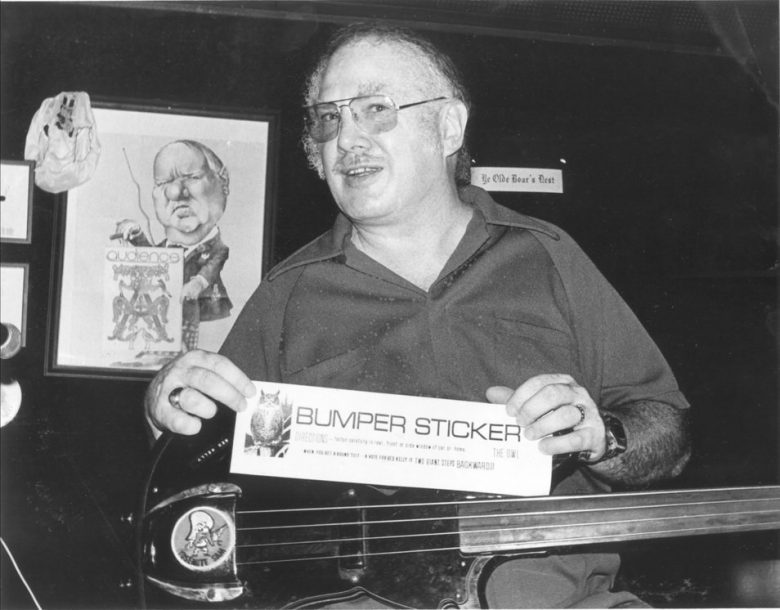 So, these two nuns are being raped….” Dead silence. No one says a word. No glasses tinkle; no blenders whir. The only sound is an occasional furtive giggle. Red Kelly repeats the line: “These two nuns are being raped.” He looks around, proud of his ability to play an audience the way he plays the electric bass. Pianist Peggy Wied looks bored; she’s heard Red’s lines for five years. Kelly continues, “One nun says, ‘Forgive them Father, for they know not what they do.’ And the other nun says, ‘Mine does!'”

The music and the chatter continue until the typical Saturday night comes to another typical ending: a tiny, dainty, 97-year-old “chanteuse” named Lucie Griswold gingerly approaches the stage on Red’s cue to “close” her son-in-law’s smoke-filled jazz emporium with the anthem she lives for, “Show Me the Way to Go Home.” She attacks it with such gusto, you’d swear she’s still waiting for someone to book her on American Idol. Bless her soul, Fast Lucie, as everyone calls her, has certainly never heard of American Idol. Actually, she doesn’t hear much: she’s not merely stone deaf; she’s tone deaf. Peggy is the only one who can accompany Fast Lucie because Peggy has solved the mysteries of comping in quartertones by playing in the cracks.

Thomas Raymond Kelly was born in Shelby, Mont., in 1927 to parents too poor to raise him. “My childhood was like a Dickens situation,” Kelly recalls, referring to being raised in Montana orphanages in Missoula and Great Falls after being struck by polio at age 2. He still relies on a cane due to postpolio syndrome. “It was rough being a Depression baby,” Kelly says, and with that he fast-forwards to the real beginning of his life: He’s back with his family, in Seattle, as a high school freshman, and he spots his ticket to freedom: “I saw this acoustic bass that no one was playing in the school band, so I took it home and taught myself how to play it. I always had a good ear I could always hear those low tones. Besides, music was more important than algebra.”

Bandleader Johnny Wittwer at the China Pheasant in Tacoma told him, “You got a great tone kid, but you don’t know what you’re doing. Follow the pinky on my left hand and you got a job.” Wittwer’s pinky soon led Kelly to Tiny Hill who was coming through Seattle looking for a bassist. Kelly decoded the bass clef, and the next night he began a dizzying, name-dropping road odyssey: “I picked the brains of the best players: Ted Fio Rito, Curt Sykes, Randy Brooks, Sam Donahue, Chubby Jackson, Herbie Fields, Charlie Barnet, Red Norvo-that was my first trio experience: Norvo, Tal Farlow and me-Claude Thornhill, Woody Herman, Maynard Ferguson, Stan Kenton, some studio work, back to Herman [the Third Herd], Les Brown-we both hated each other-finally Harry James, on and off for 14 years. And I’ll never forget the night I played with Charlie Parker at Birdland. He even hugged me, so it must have been OK.”

If ever a musician was made for the road, Red Kelly was the living template: hard-swinging, hard-drinking, easy-going, what-town-are-we-in-now guy. The whole era on the road was great, though his warmest memories are reserved for the years that he, Buddy Rich and pianist Jack Perciful made up the James rhythm machine. But the road had to end some time, and in 1974 Kelly and his wife, Donna, opened a jazz club in Tumwater, just an eighth note away from the State House in Olympia, Wash. They called it the Tumwater Conservatory. It was a great jazz spot, one that figured in the revival of Ernestine Anderson’s career. It was also the favorite watering hole for lawyers, lobbyists, assorted politicos, members of the press and, above all, members of the State Supreme Court. And, oh, how the liquor would loosen their larynxes! Since the justices would enjoy Kelly’s booze and banter after hours, they let it be known that if Kelly ever got into any trouble he should just take it to the Supreme Court and they would all have to disqualify themselves.

With all those politicos around, all kinds of ideas began to flow-one being the formation of a tongue-in-cheek slate of candidates for the imminent 1976 state elections. Kelly thought about Donna’s favorite word for all weirdoes: “owlies.” Thus was born the OWL Party and official slogans followed: “Out With Logic,” “On With Lunacy” and an official bumper sticker reading “Bumper Sticker.” One of the regular patrons happened to be a correspondent for the Associated Press. When he ran the can-you-top-this session on the wire, the political doo-doo hit the national fan.

Next day, a not-quite-sober Kelly began getting calls from sea to shining sea. He informed the press that “Unemployment isn’t working.” He was also quoted as saying, “We gotta get the girls out of those sweaty saunas and back on the streets again.” His piano-playing pal Perciful, running for state treasurer, said, “We should call in all the state’s negotiable assets and convert them to cash just to see what all that money looks like.” Mind you, these remarks, and others equally outrageous, made the official voters pamphlet for 1976, along with this gem from secretary of state candidate Fast Lucie: “I oppose the heartbreak of psoriasis, bed-wetting and postnasal drip.” As part of her campaign, she baked “unemployment rolls” and “welfare rolls” and she and Kelly delivered trays of both to the incumbent secretary of state in Olympia.

With the help of their political cronies, the OWLs held a one-day convention at the Tumwater Conservatory, accumulated the necessary 100 signatures and paid the required fees that made everything kosher. The result? They reportedly attracted 250,000 votes (the highest minority vote in the state) and infuriated all the legitimate independent parties in Washington, leading to the Owl Law, which changed the way independent parties can get on the ballot. Simply put, the electoral tongue can no longer be placed in the primary cheek.

When the Conservatory closed, in ’78, Kelly decided to stay close to home working local gigs, except for one road tour with a Jimmy Dorsey ghost band. He and Donna scouted locations in Tacoma and in 1986 opened the legendary Kelly’s-the musical equivalent of Cheers. It was the only place to hang out and everybody knew your licks. Count Basie and his whole band dropped in twice, unannounced, after playing nearby; ditto Tony Bennett, Diane Schuur and even classical musicians appearing at the nearby Pantages. Bill Ramsay could call it his second home.

But Kelly’s Club flourished only as long as Donna was there, overseeing the schedule, the help and the food. She was famous for the red beans and rice recipe given to her personally by Louis Armstrong. In 1999, Donna passed away and nearly took Red with her. Theirs was that rare story of two devoted, doting lovers, joined at the hip. As Kelly laments: “Donna was irreplaceable. When they made her, they threw away the shovel.”

Kelly lost interest in the business at a time when Tacoma lost interest in jazz. In September 2003, Kelly donated his vast collection of priceless photographs of the good old days to the Tacoma Public Library and closed his storehouse of memories. Tacoma’s Official Living Legend/Raconteur still makes guest appearances, still shocks audiences and still waits for American Idol to discover him.