Skip to content
Become a member and get exclusive access to articles, live sessions and more!
Start Your Free Trial
Home > JT Archives > Odyssey Band: Back in Time 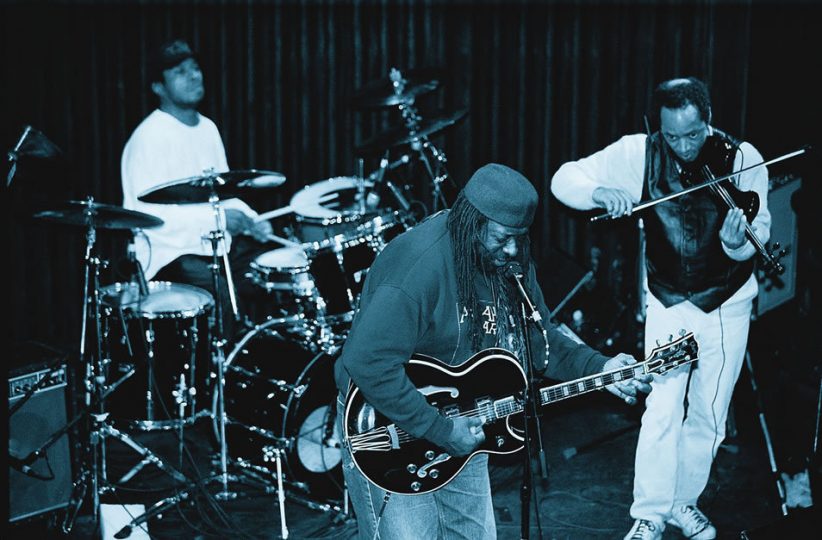 Every performance by guitarist James “Blood” Ulmer is a trip “back in time.” You can hear field hollers in Ulmer’s music. You can hear Africa. But you can also hear the shrieks of demons that live out beyond the free-jazz frontier. No one covers more historical and spiritual bandwidth than Ulmer, from raw backwoods blues to high-voltage thrash guitar to harmolodics learned directly from his one-time boss and landlord, Ornette Coleman.

But the title of Ulmer’s new album refers to a particular past moment. In 1983 (during a brief three-album tenure with Columbia), Ulmer released a trio recording called Odyssey, with violinist Charles Burnham and drummer Warren Benbow. It has been out of print for years–and it may be Ulmer’s best record.

These three players had not been in a studio together for 22 years. They reunite for Back in Time and take up where they left off. Their group sonic signature still freezes you right in your chair. Burnham’s violin is often smeared through a wah-wah pedal, and Ulmer’s guitar is all whining sustains and shuddering double-stops. At the bottom, drummer Benbow kicks pure, relentless, unapologetic funk.

But any written description of Odyssey the Band is no longer valid by the time the ink dries. This group redefines itself every few moments. The opener, “Last One,” starts as the meanest of grooves, but two minutes later Ulmer’s snaking, jangling insinuations have detached themselves from Benbow’s beat, and so have Burnham’s moans and sighs. The next piece, “Open Doors,” proves that Ulmer could have gotten rich in rock ‘n’ roll. No one, not even Ulmer’s exact contemporary, Jimi Hendrix, has ever played filthier, nastier guitar. But Ulmer’s creative process is more than brute force and distortion. He goes right to the edge of the atonal abyss, where very few rock guitarists have ever dared venture.

If Back in Time contained more tracks like “Open Doors,” it would be a monster. But “Love Nest” and “Channel One” are subdued, textural pieces that are content to revel in the evocative sonorities of that otherworldly guitar/violin blend. The two vocals, “Little Red House” and “Let’s Get Married,” sound like they come from a different session, restricting Ulmer’s vast instrumental abstract expressionism to a single verbal storyline. But even when he sings, Ulmer always disrupts expectation, blowing up whole verses with harmolodic riffs. And if Benbow’s gutbucket shuffles sometimes become reductive, like self-conscious simplifications, he is also capable of sliding off the beat and making you search for it. His solo on “Woman Coming” is perfect–deadpan yet erotic.

Odyssey the Band is, after all, a collective. What makes it an ideal showcase for Ulmer’s art is the transcendent hook-up with Burnham, whose reemergence on this album is the latest compelling example of the violin renaissance now occurring in jazz. (Think Billy Bang, Jenny Scheinman, Mark Feldman, Mat Maneri, et al.) Within the bare-bones trio format, Ulmer’s unison tuning enables his instrument to fill in, at least by implication, the missing bass parts. Burnham’s violin twists around Ulmer’s guitar to make a single, seething treble voice. It is an ensemble sound like no other, and engineer Bob Musso adequately captures its sting.

Ulmer explains the project thus: “I haven’t heard anybody playing that shit yet–that’s why I got to go back and play with Odyssey!”