Skip to content
Become a member and get exclusive access to articles, live sessions and more!
Start Your Free Trial
Home > JT Archives > Norman Brown: Give ’Em What They Want 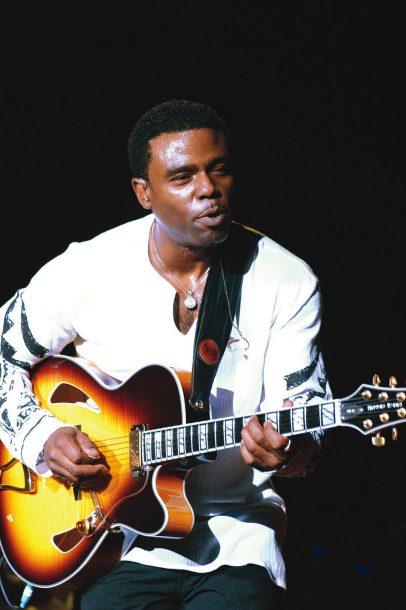 It may surprise you to hear Norman Brown go off on a rant. This, after all, is the guitarist, sculpted in the Wes Montgomery/George Benson tradition, who for 15 years has been recording baby-making smooth jazz with a sophisticated urban polish.

But L.A. will make anyone crazy, and the 44-year-old from the jam-packed San Fernando Valley, via Kansas City, Kan., says he’s fed up with the incivility he encounters every day. “People don’t care about anyone,” he says, a touch of anger creeping into his voice. “We need to wake up and be more aware. It’s hurting us.”

That’s not all. Brown, whose seventh solo album is called Stay With Me, is also frustrated that, as a black man, he continues to run headlong into prejudice. It doesn’t matter that his latest CD, his debut for Peak Records, was his first to debut at No. 1 on Billboard’s contemporary jazz chart. “I can go in the store and get no service,” he says. “The cat’s watching me for security reasons. But then I pull out my platinum card and it’s a whole ‘nother story.”

Brown’s fans, however, needn’t worry that he’s crafted an entire CD of protest songs. Far from it. Stay With Me continues the path of his two previous works, West Coast Coolin’ and the Grammy-winning Just Chillin’, with its mash-up of breezy instrumentals and vocal tracks. With the instrumentals, especially, Brown has revisited his spectacular sophomore CD from 1994.

“I love to give fans what they want,” Brown says diplomatically. “I’ve been listening to them through autograph signing sessions and hanging out on smooth-jazz cruises. People kind of define Norman Brown by an album I made called After the Storm, and I love that one too.” Brown claims the new CD blends the essence of that CD and his increased focus to catch on with the R&B crowd.

That focus has turned on the idea that, like his idol Benson, Brown can actually sing in addition to throwing out well-timed vocalese. “I was doing the scatting thing and people would always tell me they wanted to hear some vocals,” he says, admitting that there’s a business element to this thinking, as well. “In smooth jazz we don’t really sell enough records to get our music out to the masses like it should be. I felt like I could do what a lot of the great jazz artists in the past have done, starting with Louis Armstrong and Nat ‘King’ Cole and into the future with George Benson. They were able to draw a whole new audience that didn’t necessarily like instrumental music.”

The move seems to be paying off for Brown, who is able to cross markets. The title track to Stay With Me, in fact, is written by R&B singer and longtime friend Brian McKnight. Brown’s confidence in his voice was so high that he asked McKnight to sing background vocals while he took the lead.

Thousands are seeing just how good Brown’s vocals are this summer and into the fall with the third annual Summer Storm tour, which he created. This year’s lineup includes Brown, keyboardist Jeff Lorber, saxophonist Marion Meadows and vocalist Peabo Bryson. Brown is also thrusting himself into the spotlight as a DJ for Broadcast Architecture’s Smooth Jazz Networks. Broadcast Architecture is a controversial consulting firm for smooth-jazz radio that earlier this year launched a 24-hour radio format heard in more than 20 cities. The president is Allen Kepler, who just so happened to perform with Brown in the same high-school jazz band. Maybe that’s why Brown feels confident enough to lay down some constructive criticism of the format.

“Smooth jazz radio today is a mixture of older music and instrumentals in between,” he says. “It doesn’t have a strong enough identity to lock in more people. It’s not spreading beyond the hardcore fans because it’s catering to, ‘Let’s keep people happy in the office. Let’s not make it too funky or ear-catching.’ And with all the technology we have there are a lot of people who can just go in and make records, and all of a sudden here’s a new CD to compete in this already extremely full pool. All of that combined with the music not getting any visual exposure-it never reaches TV in any way or is used in ads, movies or entertainment shows. All of this makes our sales base so limited.”

There’s one more factor. “Smooth jazz has a reputation for being uncool and nerdy,” Brown says. “It’s a bad rap for artists.”

And that’s enough to start another rant. Maybe next time.