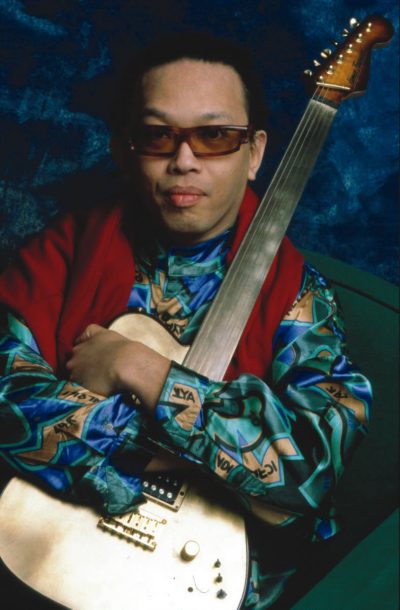 Purple has the talented guitarist-arranger radically recasting several familiar Hendrix themes while also showcasing Lê’s monstrous chops. Highlights include an inventive funk-fusion interpretation of “Are You Experienced?,” a reharmonized 7/8 rendition of “Burning of the Midnight Lamp” and a stunning 12/8 reworking of “Voodoo Child (Slight Return)” that incorporates the Gnawan rhythms of Morocco and translates Hendrix’s lyrics into the Bambara dialect of Mail (sung by Aida Khann). Drummer Terri Lynne Carrington provides the whirlwind pulse behind “Manic Depression,” slams with authority on a 15/8 version of “If 6 Was 9” and supplies the funky drummer backbeat behind “Purple Haze” while also offering soulful, seductive vocals on “1983…(A Merman I Should Turn to Be),” “Burning of the Midnight Lamp” and “Up From the Skies.”

A former member of the French National Jazz Orchestra and frequent guest with Köln’s WDR Orchestra, Lê formed a band with bassist Richard Bona in 1993 that specialized in Hendrix’s music. Two years later he took part in a “Universe of Jimi Hendrix” concert in Stuttgart, Germany, along with fellow guitarists Vernon Reid and David Torn. But in spite of all the attention that he’s paid to Hendrix in the past, Lê maintains, “When I was a teenager Jimi Hendrix sounded too crude to me. It’s only after being a jazzman, in 1993, that I really got into Jimi. The more I learned about his music the more I found he was a genius because of the fire and soul burning every note of his, the beauty of his songwriting, the creativity of his research and his unique attitude as an actor of contemporary history.”

Lê’s idea with Purple was to bring out the “other side” of Jimi’s genius by exploring the singer-songwriter as opposed to the guitarist. “I also wanted to pursue the directions he started or that he may have worked on today-jazz and world music. Jimi was a tireless researcher, and I’m sure he would be meeting musicians from all over the world if he was still with us today.”