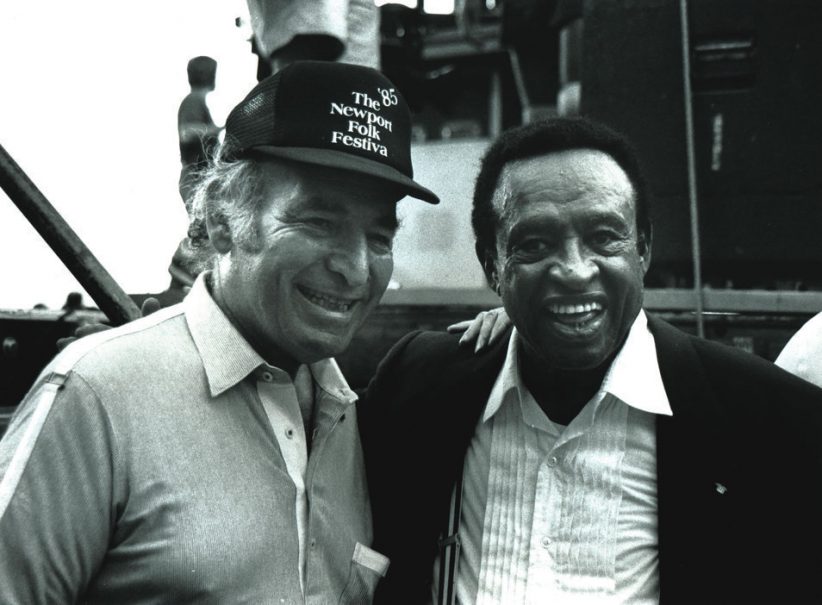 Christian McBride settled into a chair onstage and flashed a knowing smile. It was Sunday afternoon at Fort Adams in Newport, R.I., and for the moment he was working not as a bass player but rather an interviewer, as he does on his Sirius/XM satellite radio show. There had been a problem, said McBride, waving an unlit cigar: His scheduled guest backed out, leaving him to scramble for a replacement. The solution, simple in retrospect, was to enlist Newport Jazz Festival founder George Wein.

Of course: George Wein to the rescue. It was the weekend’s overarching theme. After a saga involving the sale of his production company, the subsequent flameout of the buyer and the last-minute emergence of a title sponsor, this was the festival of false endings and fresh beginnings. Still, it only happened because Wein, at 83, committed to it regardless of subsidy, balking at the prospect of a summer with no major jazz fête in Newport. “I just couldn’t let that happen,” he told McBride. “My whole life is involved here.”

I can vouch for that sentiment, having co-authored Wein’s autobiography a handful of years ago. But then so can any number of musicians and fans, beneficiaries of a tradition that stretches much farther back, through 10 previous presidential administrations and countless other changes of the guard. Landing this year with the earnest if cumbersome title George Wein’s CareFusion Jazz Festival 55-“It wasn’t an ego trip, it really wasn’t,” its namesake hero chuckled, citing copyright concerns-the big event carried its burden of history lightly, with an ageless exuberance and maybe a new lease on life.

The music, on a vast open-air stage and in two comfortable tents, proposed a study in vitality. This was true of elegant formalists like pianist Cedar Walton, who presided over a crisply swinging hard-bop quintet. It was true of adventurous pragmatists like Joe Lovano and Joshua Redman, who both played soprano as well as tenor saxophone, leading dynamic five-piece bands with two drummers apiece. It was certainly true of inveterate seekers like alto saxophonist Rudresh Mahanthappa, whose Indo-Pak Coalition projected an incantatory power, and multi-reedist Ken Vandermark, who made his performance a blustery depth charge, putting weight and pressure into his attack. At one point, introducing a tune called “Spiel,” he said this marked the first time an American festival had asked the Vandermark 5, his rugged longtime band, to perform original material.

It was hardly a first time for any of the final headliners on Sunday: crooner Tony Bennett, pianist Dave Brubeck and drummer Roy Haynes. All three are octogenarians, but age proved neither a barrier nor barometer at this festival. Those veterans delivered with as much vibrancy as their inheritors, and it wasn’t just Haynes, with his Fountain of Youth Band (featuring veteran bassist Ron Carter), who skewered the idea of a generational schism. Esperanza Spalding, 24, appeared both as a featured artist and as the bassist in Lovano’s band, Us Five. Haynes’ grandson Marcus Gilmore, now in his early 20s, brought a sleek percussive flow to the music of pianist Vijay Iyer. Another prodigious young drummer, Justin Faulkner, generated the requisite polyrhythmic churn in the Branford Marsalis Quartet. (Marsalis, by the way, put in a serious mentorship effort at Newport this year, coming to his own set directly from a guest turn with the North Carolina Central University Big Band. His label, Marsalis Music, was also a sponsor of one of the smaller stages.)

There were many other moments of felicitous grace, some involving little more than the glint of midday sun across a sailboat-speckled Narragansett Bay. Consulting my memory rather than my notes, I come across trumpeter Steven Bernstein, urging his Millennial Territory Orchestra through an amiably brawling “St. Louis Blues.” And saxophonist James Carter, barking through his tenor as his organ trio barreled through a juke-joint shuffle. And McBride, on bass, tapping into a deeply swinging current with pianist George Colligan and drummer Billy Hart. I was less enthralled by Mos Def, the weekend’s only glaring youth-market concession, but not because he was too hip-hop. His Watermelon Syndicate, featuring a horn section (highly capable) and a string section (nearly expendable), with musical direction from the pianist Robert Glasper, was, if anything, too well intentioned a compromise. On a festival full of blurred boundaries, it stood out more for its awkward vagueness than for any clash of style.

Across the festival, on all three stages, Wein’s name kept surfacing in tributes and testimonials. (Some artists made a point of also mentioning Jason Olaine, who worked closely with Wein on booking talent and made for a genial stage announcer.) One note of gratitude came from drummer Brian Blade, during the preface to a luminous performance by his gospel-leaning Fellowship band. “When I think about what he’s heard in his lifetime, and been a witness to, it’s incredible,” he marveled. Another came from Hiromi, who interrupted her own hyperkinetic set to dedicate a solo piano number-her deliriously maximal take on “I Got Rhythm”-to the man of the hour.

“Man, I never hugged so many musicians in my life!” Wein chirped during his rap session with McBride, claiming wonderment at the endless tide of good feeling. Then, at his interviewer’s request, he sat at the piano for some dialogue of a more musical strain. Striking up a 12-bar blues, he set a tempo suggestive of sleepy-eyed Kansas City swing. After a moment McBride joined him, with the full mahogany roundness of his tone. The feeling was relaxed but buoyant, and somewhere around the eighth chorus, Wein contentedly shook his head. “I could keep going like this all night,” he quipped, and the applause in the tent was an amen.