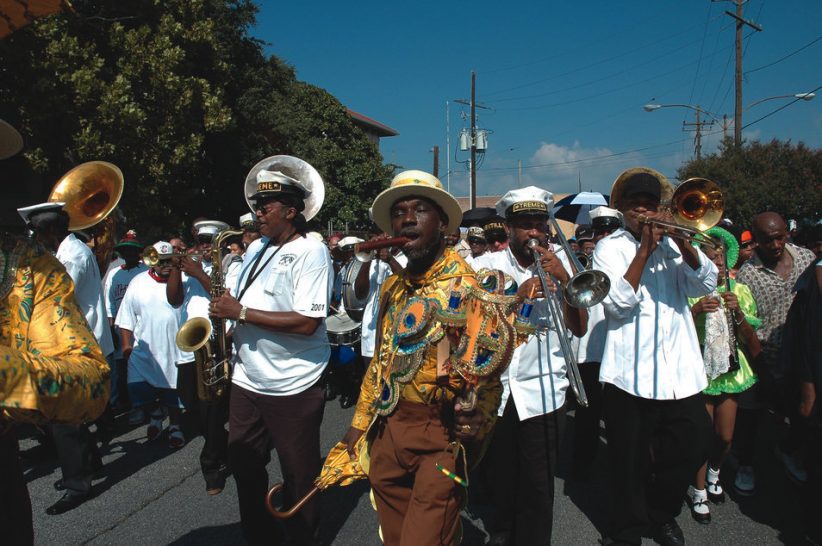 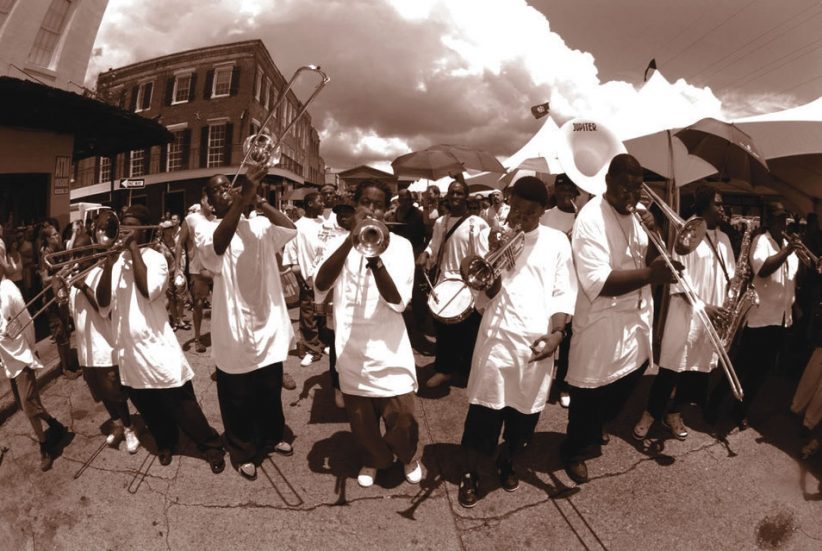 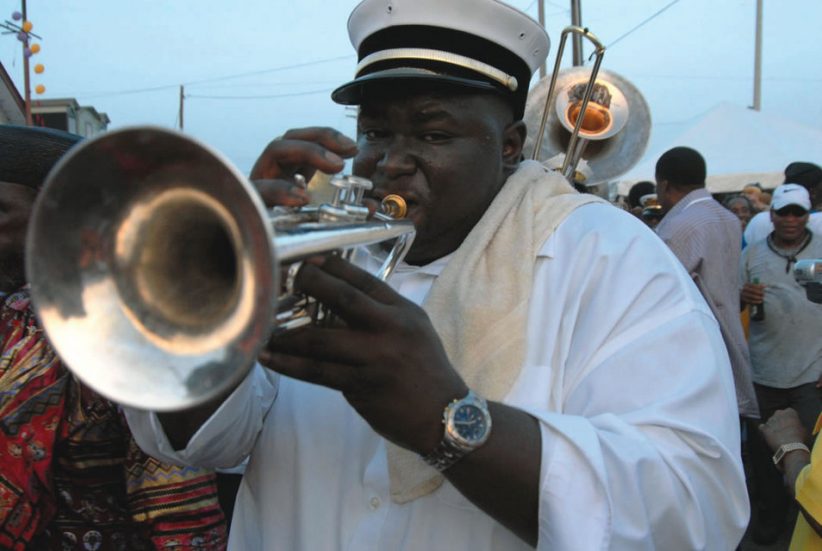 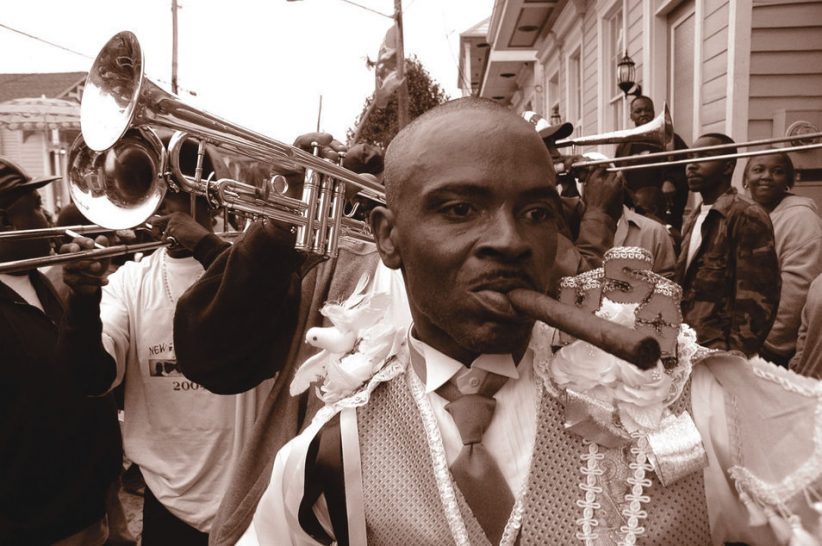 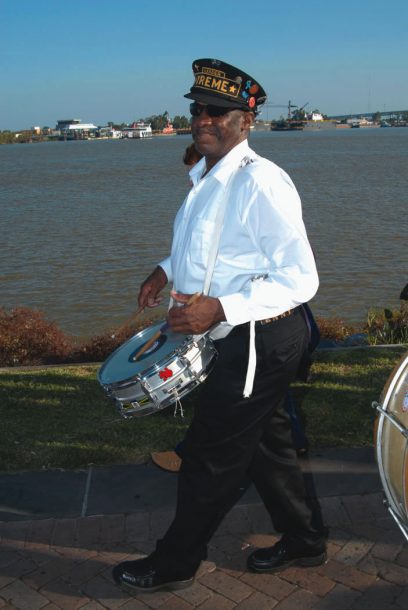 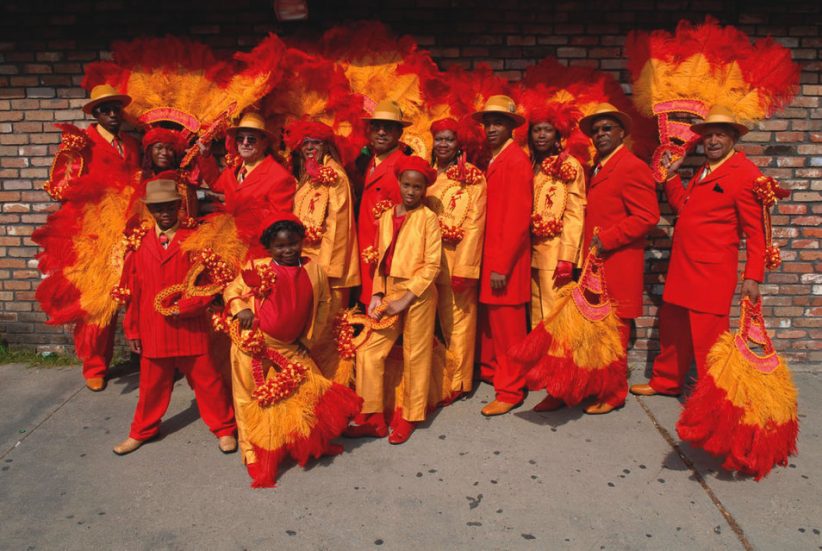 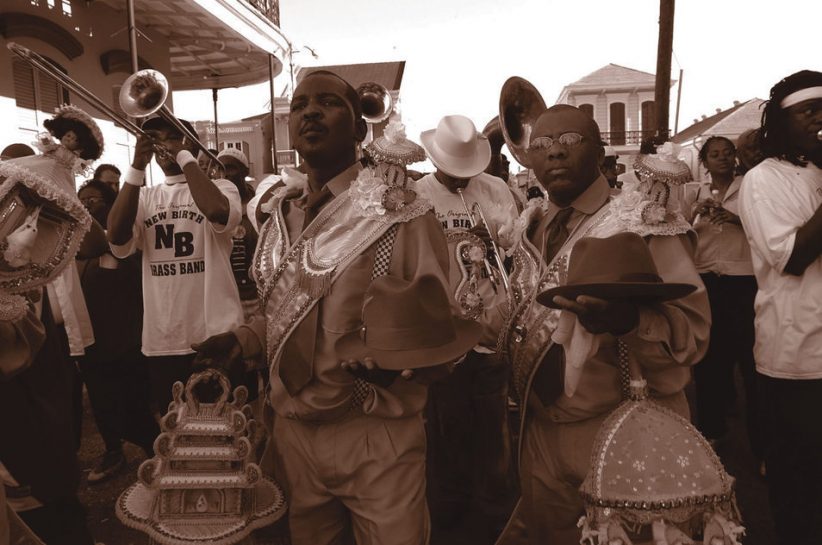 Smoke pours out from barbecue grills perched on truck beds with the smell of sizzling sausage filling the air. The trucks are parked at the start of the parade to provide a quick sandwich or cold beer that will give the second liners the stamina to buckjump in the streets for the next four fun-filled hours. They will show up again at the parade “stops” that are usually at barrooms, various club headquarters or people’s homes. A cold drink is never far from hand as vendors push shopping carts or makeshift wagons laden with ice chests along the parade route.

When a brass band really starts kicking in and the club members and second liners get down with the groove, dancing for all they’re worth, it’s almost as if the parade becomes a single entity. From afar, it looks like a human locomotive rushing by. In the middle, one can become lost in time and space, swept up in the rhythms and joyfulness.

It’s called rollin’, and it happens during that time of year peculiar to New Orleans, second-line season.

An often-heard complaint about the Southern United States is that it lacks four distinct seasons. Some New Orleanians might argue that their city simply defines its seasons differently. In the Crescent City, winter is the Carnival season that runs from Twelfth Night, Jan. 6, and ends on Mardi Gras Day, which prededes the first day of Lent. Then, starting in April, there’s the festival season with the French Quarter Festival followed by the biggie, the New Orleans Jazz & Heritage Festival. The next time of year, of course, we’d rather do without. That’s hurricane season. The fourth is one few folks around the country and even many locals have yet to discover-second-line season.

While the duration of most seasons remains constant, the second- line season, when New Orleans’ many social aid and pleasure clubs celebrate their anniversaries with colorful brass-band parades, keeps expanding. It now runs from the last Sunday in August and continues with breaks during Mardi Gras, Jazz Fest and a sprinkling of other dates, with the Perfect Gentlemen Social Aid & Pleasure Club capping it off on Father’s Day.

Alfred Carter, widely known as Bucket to those in the street culture, has been a member of the 123-year-old Young Men Olympian Jr. Benevolent Association for an amazing 68 of his 73 years. Carter attests to its growth. He remembers when the Sunday processions would start up in August and be over by the end of September. “They didn’t have but four or five clubs,” says Bucket, naming historic groups like the Young Men Olympian, the Square Deals, the Prince of Wales, the Treme Sport and the Jolly Bunch. He recalls the ensembles of the day that provided the lively beats as the Eureka, the Young Tuxedo, the Olympia, Doc Paulin’s and George Williams’ brass bands.