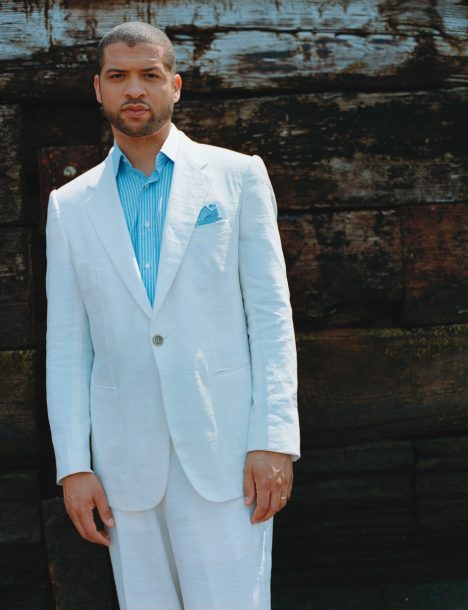 Two or so years ago, Jason Moran played a memorable concert at Symphony Space. He transformed even the simplest and most time-honored of concert formats – solo piano – by leaving the bench between selections, sitting in a nearby chair next to a small table, calmly pouring himself water and talking to the audience as if he were at home. The result was oddly stiff, the opposite of what Moran had intended. Nonetheless, it was a stark and effective example of his drive to expand possibilities for jazz performance.

Moran is justly regarded as a major voice on his instrument, heir to such idiosyncratic masters as Andrew Hill and Jaki Byard. But his aesthetic awareness extends well beyond the keyboard. His seventh Blue Note album, Artist In Residence, due in the fall, will feature works inspired by the conceptual artists Adrian Piper and Joan Jonas. Another mixed-discipline work, Rough Crossings, had its premiere on June 2, on the same stage as Moran’s offbeat solo concert – the Leonard Nimoy Thalia at Symphony Space. It featured the pianist with soprano Alicia Hall Moran (his wife) and the renowned British historian Simon Schama.

Schama is a prolific author, public intellectual and professor of history and art history at Columbia University. He is no stranger to performance of a sort, having written and appeared in the 15-part television series A History of Britain, broadcast from 2000-2002 by the BBC and the History Channel. His newest book, Rough Crossings: Britain, the Slaves and the American Revolution, forms the basis of this spoken-word collaboration with Moran. As Schama read selected passages from the book, Moran provided not just underscoring, but also fully formed interludes, including original pieces and traditional songs. Hall sang most of the program, to wonderful effect.

Rough Crossings sheds light on a little-known aspect of American revolutionary history: black slaves of the colonies who were promised freedom not by fledgling America, but by Britain – in exchange for service in the British military. Many took the offer and fought with the Redcoats. A number of them were ultimately resettled in Nova Scotia (“New Scotland”), where they came into conflict with the island’s white settlers. Philanthropists and white abolitionists in England supported a plan to ferry the free blacks across the ocean to Sierra Leone, in West Africa, to find freedom and independence at last. Or so was the hope. The plan went ahead but fared poorly.

This performance was brief, so it could cover only so much ground. But Schama set the right tone with his confident, unhurried narration, bringing to life a complex and decidedly unsentimental history. To begin, Moran played “Rough Crossings,” an original solo piece. He continued at low volume as Schama walked onstage to read. It was clear, however, that this would be no mere background music, that Moran’s playing and Schama’s words would sometimes compete for attention. This issue was resolved during the song interludes, the first of which featured Hall Moran with “Lift Ev’ry Voice and Sing,” listed in the notes as the “Negro National Anthem.” The mere sight of her, emerging from the wings in full voice, was disarming and powerful. But even more surprising was Schama’s own musical contribution: a counterrevolutionary fight song hailing the virtues of “the British grenadier.”

Schama’s text concerns events long past, but it resonates as a chapter in the U.S./UK relationship, still one of the world’s most consequential. Schama draws no simple conclusions, nor does he use the story to score facile anti-American points. Rather, he evokes what fellow historian Michael Kazin has called “the landscape of real politics, which has always witnessed a clash of ideologies as well as interests, persuasion as well as buy-offs and sellouts.” Moran’s song choices brought that vivid landscape into view as well. Thus, “My Country, ‘Tis of Thee” gave way to “God Save the King,” with precisely the same melody, signifying the slaves’ shift of allegiance from Stars & Stripes to Union Jack. “Wade in the Water,” in this context, spoke to the hunger for freedom beyond America, not within it. And “Give Me Your Tired, Your Poor,” Irving Berlin’s treatment of the Emma Lazarus poem, referred not to the passage through Ellis Island, but instead a reverse exodus: to Canada, then back to Africa.

This was not the only historical-musical happening New York has seen in recent months. On March 25, Howard Zinn appeared with the Kronos Quartet at Zankel Hall, an event slagged by Alex Ross of The New Yorker as follows: “Although I consider myself left of center … I couldn’t help wishing that Condoleezza Rice had been booked for the second half, to read policy papers on Iraq and play Brahms at the piano.” The Moran-Schama encounter had political potency but was never tiresome or propagandistic. And alas, there was no second half – the program ran just under an hour. The audience was diverse but small; severe rainstorms had disrupted the subways and made for havoc during the evening rush. Hopefully there will be other opportunities to hear this deeply affecting work, and even to hear it expanded.