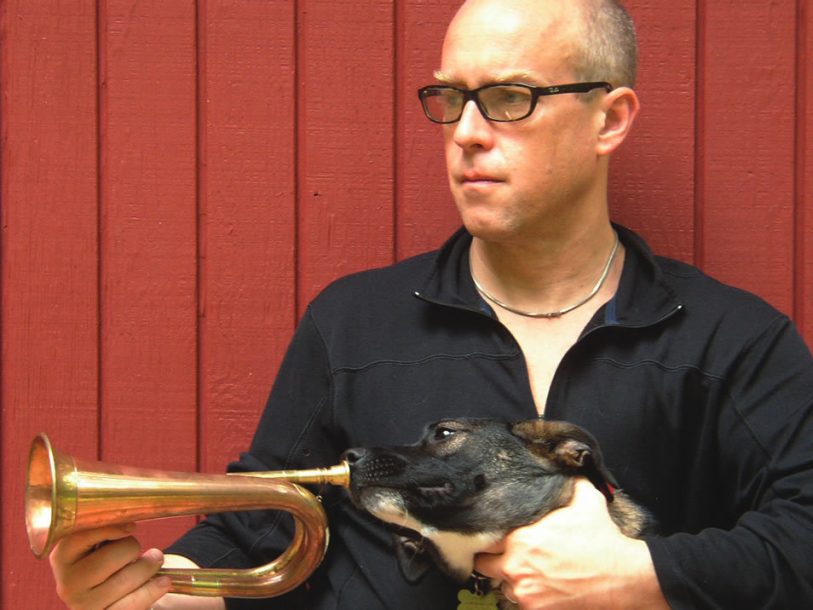 As trumpeter and bandleader-conceptualist, Dave Douglas has been so creatively vital in the realm of 21st century jazz that it’s hard to believe he isn’t better-known outside of jazz’s insider circles. He is a habitual poll-winner, a restless maker of projects, a Guggenheim Fellowship recipient and now the proud mini-mogul of his own artist-run label, Greenleaf Music, which recently released his new quintet project, Meaning and Mystery. The adventure continues.

When Douglas’ quintet recently descended into the jazz temple of the Village Vanguard for a week, the context and resulting atmosphere was at once reverent and raucous, cerebral and viscerally juicy. Douglas, who takes his kudos in stride and never seems to let it go to his head or disrupt his aesthetic flow, would have it no other way. Late on a Wednesday night/Thursday morning at the Vanguard, the group summoned up plenty of meaning and mystery.

This quintet, like other projects in Douglas’ constellation, bows to tradition while departing in personalized ways, both in ensemble format and musical material. It’s a quintet in the classic Blakey/Miles mold, with intertwining trumpet and tenor sax up front, except for the inclusion of Uri Caine on Rhodes-and yet the Rhodes’ warm, organic timbre makes it seem like one of the least processed and “electric” of electric instruments, especially given Caine’s nimble hands and ever-musical mind.

Together since the dawn of the new century, the Douglas quintet-beautifully grounded (while also liberated) in the rhythm section of bassist James Genus and drummer Clarence Penn-has settled into a groove and an identity. The recent personnel shuffle, in which Donny McCaslin replaced Chris Potter in the tenor role, is a positive move. Potter’s brilliance and flexibility is a hard act to follow, of course, but McCaslin-an up-and-comer for years-is the right person for the job. It’s high time the saxophonist was more widely recognized and appreciated. He’s a versatile player who moves easily between inside and outside musical zones, without pretension or restrictive attitudes. As heard on the Vanguard bandstand, there’s a fluidity and grace to his playing even when he’s pushing at envelopes.

At the Vanguard, the band veered through several tunes from the new album, a blissful pastiche of post-hard bop, avant-garde-esque zigzagging energies and evocative moments of slow-brew introspection. A witting anomaly on the album, and in this set, was “Elk’s Lodge,” which Douglas explained was inspired by a run-in with a trio of prickly Canadians (during one of his regular summer residencies at Banff Centre). Like a tipsy mental tour of some dreamworldly Elk’s Lodge, the tune has a sassy, slightly drunken feel, with abrupt turns into contrary, hug-the-chart sections. Genus’ oddly-shaped chromatically-ascending bass riff, set against the sloppy slow groove, reminds us of the tune’s canny blend of saucy vibe and clever disjointedness.

Throughout, the players’ solos exemplified the implied band aesthetic, carefully balancing structure and freedom. In one solo late in the set, Douglas spun through his own signature vocabulary of lines, but also managed to brush past fleeting quotes of “All Blues” and “People Will Say We’re in Love.” Despite his innate sense of originality, Douglas possesses a wild musical compass and an awareness of the vast landscape of past music and artistic paradigms. It would seem that he’s got his ears wide-open all the time. That, primarily, is why Douglas deserves the waves of hoopla sent his way, and why live ops are to be savored, whether in Banff by summer or the Vanguard in the spring.