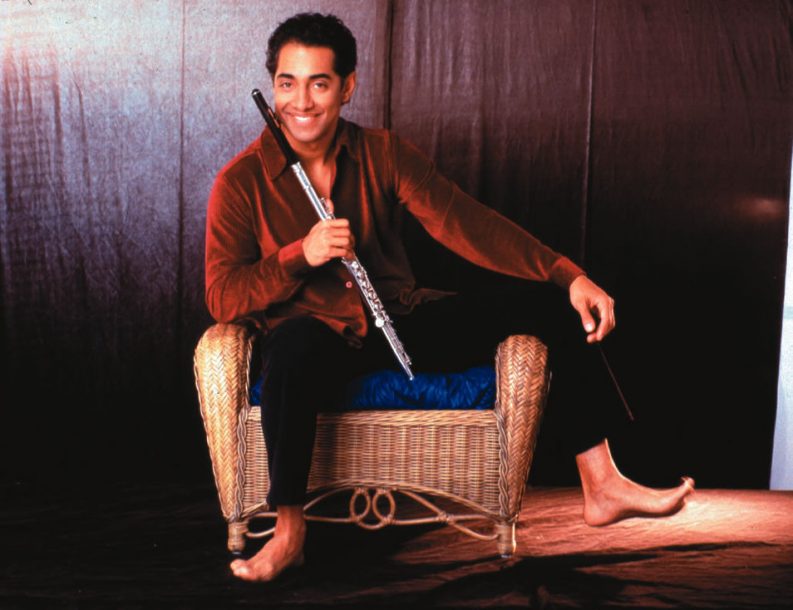 A charismatic, versatile musician with four previous albums and international performances to his credit, world-class flutist Nestor Torres makes his stunning Shanachie debut with Treasures of the Heart. His sensitive,sweet-sounding, rhythmic approach derives from playing drums as a kid, his classical training, and salsa gigs in New York.

Torres composed most of the10 songs performed with his Miami musicians and guest artists Kim Waters, Marc Antoine, and Dave Samuels. Spanning the jazz and charanga-style realms, his unique style occasionally reflects influences of his idol, Hubert Laws. “He set such high standards of musicianship and flute performance, that when I first heard him, I had no choice but to reach out for that,” says Torres.

Born in Mayaguez, Puerto Rico, on April 21, 1957, Torres was inspired by his father, a vibist/pianist who introduced him to the music of Tito Puente, Cal Tjader, and Machito. Torres began playing drums but switched to flute at age 12, studying at the Escuela Libre de Musica de Mayaguez and, eventually, Puerto Rico’s Inter-American University. “When I decided I wanted to play the flute, my father wasn’t necessarily happy,” says Torres. “In Puerto Rico, what flute player makes a living? But he went on to introduce me to the music of Herbie Mann, Jean Pierre Rampal, and Orquesta Aragon, so he was very instrumental in my career.”

Torres moved to New York at age 18, briefly attending Mannes College of Music and Boston’s New England Conservatory of Music. Once established on the NYC Latin music scene, Torres left for the warmth of Miami, where he’s lived for 18 years and where he survived a horrible boating accident in 1990, a life-affirming event that has given deeper meaning to his work.

While working on Treasures of the Heart, Torres said, “This is the most involved I have been in the production and the shaping and arranging of the work. I’m very excited about the album and find it to be the most honest reflection of what Nestor Torres is.”