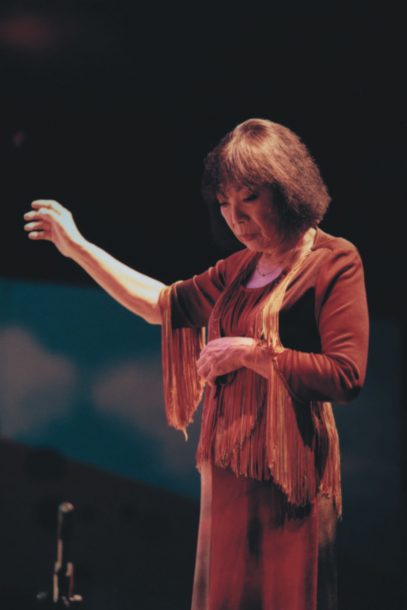 As they say, all good things come to an end but in this case another good thing will replace it. Thirty years after forming her orchestra in Los Angeles-an organization that was reconstituted when Toshiko Akiyoshi and husband, Lew Tabackin, moved back to New York in 1982-came the disbanding of the 16-piece ensemble, a weekly Monday night fixture at Birdland since 1998. She announced, “I have decided to devote my full time to playing piano.” Given the difficulties in maintaining a big band, even on a mostly once-a-week basis, in what has been essentially a post-big-band era from the ’50s, Toshiko and Lew have been heroic.

The final performance, at Carnegie Hall on October 17, was a kind of retrospective, in the first half featuring a number of Akiyoshi’s signal compositions ranging from the ’60s to the ’90s; and in the second, her three-part “Hiroshima Rising From the Abyss,” from 2001. Not only did the evening underline her talents as a composer but also as an arranger. Her pieces encompass the serious and somber to calm, beauteous reflection and insouciant swing while utilizing voicings of unusual orchestral combinations.

The evening began with a brief statement of the band’s theme, “Long Yellow Road.” Then, with the addition of Japanese hand drummers Hiromitsu Nishikawa and Masakazu Yoshizawa, came “Children of the Universe.” The drummers, also using vocal effects, set a mood for Tabackin’s solo flute, followed by atmospheric, out-of-tempo murmuring from the band. Plaintive reeds with the Carneyesque presence of Scott Robinson’s baritone led to a full-bodied tenor solo by Tabackin back by the sweet fusing of clarinets and flutes, complemented by blowzy trombones. For closure Lew returned to his flute, the Japanese drummers punctuating his solo at odd moments and then interacting more directly with him.

For “Glass Ceiling” Tabackin’s tenor opened unaccompanied with Rollins remarks which then morphed into a lovely, sometimes Websterian ballad performance in front of the rich sound of the ensemble. “Kogun,” another example of how Toshiko uses her heritage to inform her music, again combined Tabackin’s flute with the Japanese drummers. The band introduced an anguished theme with Mingusian overtones. Toshiko moved to the piano for one of her rare solos, a very rhythmically active romp in a minor key.

Guest star Frank Wess, who at one time was lead alto sax with the Akiyoshi Jazz Orchestra, was featured in the two numbers before intermission. “Wishing Peace,” part of Toshiko’s “Liberty Suite,” found Wess’ flute in the solo spotlight (he recorded it when it was the title number of the band’s CD on the Ken label) and he interpreted the prayerful ballad in fine fashion. There was a magical written interlude for a reeds-brass amalgam in the middle of the piece. Based on “Strike Up the Band,” the up-tempo “After Mr. Teng” was written by Toshiko to mark the meeting between President Nixon and the Chinese chairman. Wess was on tenor sax here and kicked off the soloing. Swift, boppish trumpet passages ushered in Toshiko’s solo, which continued that groove. Solos by alto saxist Jim Snidero and trumpeter John Eckert set up a tenor conversation between Wess and Tabackin, which climaxed with a stop-time, each man-for-himself duet.

For “Hiroshima” conguero Luisito Quintero and percussionist Valtinho were added along with Won Jung-Hyun on Korean traditional flute. With his long robe and super-stovepipe hat Won was an imposing figure even while sitting. His stark flute interludes were one of the elements in the opening segment, “Futility-Tragedy,” along with Tabackin’s tenor and the trumpet of Jim Rotondi. Toshiko’s daughter, Monday Michiru (toward the end of the concert she revealed a sweet singing voice in a ballad performance), read a relevant text over mournful instrumental tones and there was an explosive “free” section from various horns representing the horror of the bomb. In “Survivor Tales” Eckert played a most expressive and lambent solo (I imagine from the pen of Toshiko) while the composer accompanied him. Tabackin’s flute led off a litany of different instrumental voices, paired variously. Eckert, Rotondi and trombonist Scott Whitfield soloed and the “tales” ended with a lamentation-cryin’ the blues-from the ensemble.

“Hope” began with the striking of chimes by drummer Andy Watson and then featured Lew’s tenor over organ chords from the band. It was fitting close to a moving extended composition. I can’t tell you how long it is because I wasn’t looking at my watch. Toshiko then brought her daughter back to the stage and accompanied her sweet voice.

After the leader’s short farewell speech and thank yous, the orchestra swung into “Long Yellow Road.” There were many short solos and as each finished he (or she, in Toshiko’s case) exited the stage. Tabackin and his flute were the last to depart.

One week later a reception was held for Akiyoshi at the Japanese Consulate, where her 50 years in jazz were celebrated in 1996. She played solo, beginning with “Count Your Blessings,” continuing with an original, “Repose,” and closing with a bravura rendition of “Just One of Those Things.”

She began the first number chordally, out-of-tempo and bassist Peter Washington, who was standing next to me, whispered, “That’s beautiful. She’s got so much Bud [Powell] in her.”

Before playing “Repose,” she told us that it was written for the winter season in northern Japan (“Very quiet, very cold”) and proceeded to frame her improvised section with a warming, gentle stride.

The “Bud” present in “Count Your Blessings” was even more evident in “Just One of Those Things,” but it was absorbed, not copied, into her own soul. There were references to Tatum as well.

Toshiko plans to play in a trio context as well as solo and, on occasion, make husband Lew’s trio into a quartet.

At the piano Toshiko is much more Moby than goby.