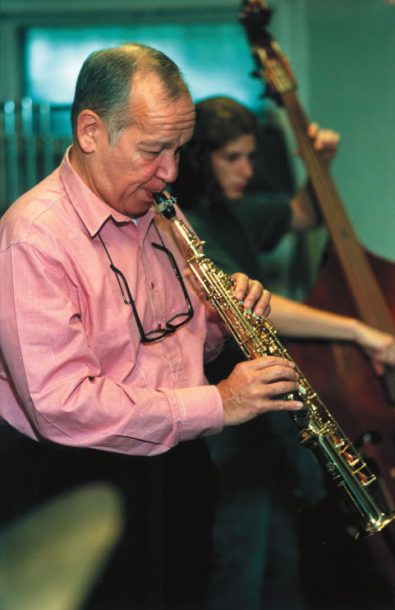 With a modicum of media buzz and no corporate sponsorship, the Guelph International Jazz Festival has emerged in recent years as a vision-driven festival that can close the Canadian season as emphatically as Victoriaville opens it. Reaching the 10-year mark with its 2003 edition, the Guelph festival is positioned to take the great leap forward in terms of scale and reach. The premiere of D.D. Jackson’s tour-ready jazz opera, “Quebecite,” the festival’s first major venture as commissioning producers, brought the packed house at the gleaming River Run Centre to its feet. The festival’s main indoor venue for free events was always aggravatingly over-capacity, and its mid-sized auditorium for daytime ticketed concerts just barely accommodated the turnout.

Just about anywhere else, the decision would be automatic: invite some deep pockets to the dance and expand. But not in this Ontario university city of about 100,000, whose progressive stripe is reflected in everything from the bookstores to the recycling regimen and the grassroots campaign to keep Wal-Mart out. Residents exude a heightened sense of civic franchise, suggesting they would frown upon a too cozy relationship with politically incorrect corporate interests. Their commitment to the festival is quite distinct from those of hardcore fans, who make up the festival’s other major constituency. For many residents, the jazz festival is roughly equivalent to a harvest festival or homecoming weekend, an annual event that is as much, if not more, about community as it is about music.

The festival deftly accommodates both segments of its audience through imaginative use of venues, particularly the massive St. George’s Anglican Church. Instead of a conventional double bill, in which both artists or ensembles are presented in the same space, the festival presented a two-part evening that began with a solo concert by saxophonist Evan Parker in the reverberant sanctuary, followed by an uproarious set by the Willem Breuker Kollektief in a multipurpose hall decked out with round tables and chairs, with beer and food available in an adjacent kitchen. The festival also made fine use of the brisk September mornings, presenting Steve Lacy solo and a tribute to Paul Haines with Parker, pianist Michael Snow, saxophonist David Mott, guitarist Stuart Broomer and percussionist Jesse Stewart at 10:30 a.m., which is ordinarily a daunting hour for festival goers.

For three of its five days, the festival requires good walking shoes and a brisk pace to make all the gigs, particularly when the half-hour trek from the MacDonald Stewart Art Centre and the Guelph Youth Music Centre is involved. The MSAC presented rewarding free concerts by Raw Materials (pianist Vijay Iyer and alto saxophonist Rudresh Mahanthappa) and the duo of pianist Myra Melford and violist Tanya Kalmanovitch, and was also the site of the festival’s unique colloquium component (the factoid-challenged Paul Miller, aka DJ Spooky That Subliminal Kid, was a keynote speaker). Literally built by the community over two decades, the GYMC houses an acoustically warm room with comfortable seating, an excellent venue for tenor saxophonist Kalaparush Maurice McIntyre and the Light.

Yet even on its busiest day, a bright Saturday that facilitated traffic between the farmer’s market and the festival’s Carden Street Jazz Tent, it was still possible to linger for a few tunes by such invigorating Canadian ensembles as the Vancouver-based, free bop-oriented Primal Orbit and still catch the fine afternoon double bill at the GYMC. The pairing of cellist Peggy Lee’s Band and bassist Mark Dresser’s Trio with pianist Denman Maroney and flutist Matthias Ziegler at GYMC proved to be inspired, as both ensembles had distinctive approaches to contrasting finely wrought notated materials with bold, abstract improvisations. Given all the daytime activity, the absence of late-night sets proved to be a blessing, particularly after sitting on the pews of Chalmers United Church for Saturday evening’s double bill of Lacy’s “Beat Suite” quartet (with vocalist Irene Aebi sidelined with a throat infection, Lacy, trombonist George Lewis, bassist J.J. Avenel and drummer John Betsch were left to their own considerable devices) and a daring trio comprised of Melford, vocalist Borque Simmons and French-horn player Mark Taylor.

Despite all its small-is-beautiful charms, the festival proved to have big city savvy in its development and presentation of “Quebecite.” What distinguishes the piece from other jazz opera ventures is George Elliott Clarke’s double-edged libretto, which was alternately frothy and acrid, and the premium Jackson placed on pace, which was on the verge of a sprint for most of the piece. To the latter end, Jackson’s decision to perform with a quintet rounded out by Lee, trumpeter Brad Turner, bassist John Geggie and drummer Jean Martin was crucial. As a result, Elliott’s depiction of the heat and fall-out surrounding two interracial couples never has time to bloat from platitudes. The other smart strategic decision was to limit the cast to four principal singers. Though they had more than the requisite pipes and presence, experimental jazz vocalist Yoon Choi and soul stylist Haydain Neale were ultimately overshadowed by the classical Indian singer, Kiran Ahluwalia and the roaring Dean Bowman. As a quartet, however, they were stunning, which begs the question of why Jackson and Elliott did not give them several more opportunities to sing as an ensemble. Except for some questionable staging – particularly the rows of umbrella-toting pedestrians who seemed like refugees from a Robert Wilson spectacle and a dancer clumsily blocked in the middle of a tension-filled scene -“Quebecite” is good to go.