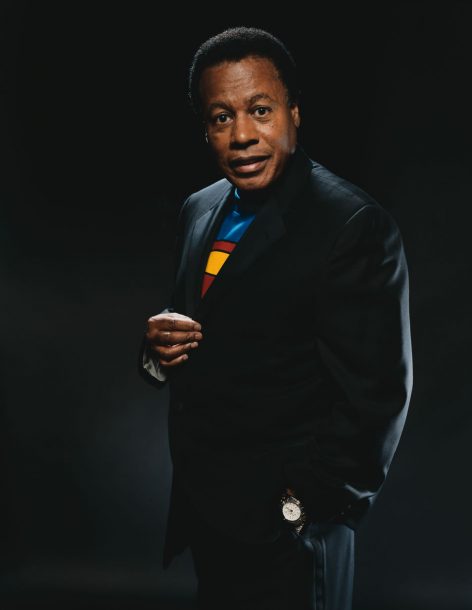 Wayne Shorter’s arrival at the Hollywood Bowl in early August marked a significant milestone for the great saxist, on many levels. A 70th-birthday extravaganza, billed “Wayne Shorter: Life and Music,” this was his debut in the huge venue, an acknowledgement of his importance in history and at this moment. His last two albums-Footprints Live! and Alegría-have cemented his role as one of the greatest living treasures in jazz.

On another level, the Bowl show was also a quasi-homecoming: Shorter was one of the few internationally known jazz musicians who called Los Angeles home (for more than 20 years), up until his move to Florida two years ago. Catching Shorter blowing and reflecting on the big legendary stage, with his acclaimed quartet, in duet with Herbie Hancock and with the Hollywood Bowl Orchestra-and before a 9,000-strong crowd-was reason enough to make this a must-see event.

A Japanese friend had donated a lavish, floral objet d’art, dubbed a “treasure tower” by Shorter. He expanded on the notion in a rare turn at the microphone: “All you have to do is look in the mirror to see your own treasure tower,” he said, after his long-standing friend Hancock had heaped praises on Shorter’s artistry and life force.

On a musical level, though, not all the stars were in line this night. Shorter’s own playing, on both tenor and soprano, was intriguing enough. The Bowl’s tough outdoor acoustics tended to make things sound condensed and mushy, and some raggedness in the ranks of the normally impressive Bowl Orchestra added to a tentative performance.

Drawing on such challenging new charts as “Angola,” “Vendiendo Alegría” and “Orbits,” from Shorter’s ambitious and textured album Alegría, the sonic whole on this night became a thicket in need of air and grace. Still, Shorter’s orchestral life is still in its infancy, and he’s got that wide-vista imagination to make great strides in the field of orchestral jazz. In this past summer’s international travels Shorter fared better in other orchestral settings, which is still a risky area for jazz musicians attempting to find that elusive blend of music on paper and improvisational abandon.

Still, there were plenty of highs along the way, including some expectedly free-spirited but bold playing from his quartet-pianist Danilo Perez, drummer Brian Blade and bassist John Patitucci-which is probably the best steady group Shorter has ever led. The saxophonist’s all-too-brief, impromptu tête-a-tête with Hancock reminded us of the special, late-career hook-up this pair has enjoyed. The audience’s ears were perked, and both pensive subtlety and kinetic playfulness were in the house.

Special guests showed up in the second, orchestral half, including show-stealing, rhythmically ferocious cameos from tap dancer Savion Glover. Shorter’s old friend Carlos Santana also came out and he sprayed some of his signature riffs and sustained notes over a simple chord vamp.

After the orchestral detours, the evening veered into a happier ending, with “Midnight in Carlotta’s Hair-one of those classic serpentine Shorter compositions-and a nicely orchestra-colored take on the old Weather Report tune “Palladium.” The coda spun on hypnotically and pared down to just the quartet, and Shorter himself sang out in the balmy evening air with final offbeat note on soprano sax. It was as if to say, “It ain’t over yet.”