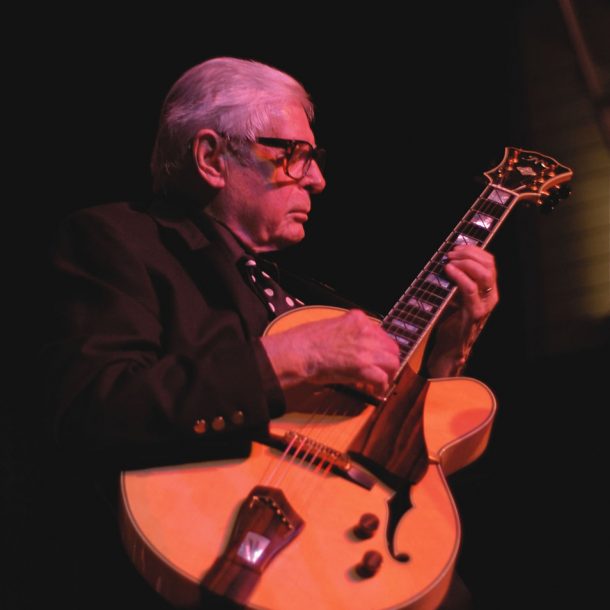 The guitarist Mundell Lowe, whose credits included work with Billie Holiday and Charlie Parker, died on Saturday at his home in San Diego, the San Diego Union-Tribune reports. He was 95. Tribune reporter and JT contributor George Varga crafted this profile of the elegant guitarist in 2008.

It certainly is for this esteemed guitarist, composer and arranger, whose résumé includes stellar collaborations with enough legends to fill at least one jazz museum.

“I can’t say this person was more important than that person; I felt close to all of them, a warm kinship to all of them,” says Lowe, who has resided in San Diego since 1989 with his wife, veteran jazz singer Betty Bennett. “We all liked each other and we all hung out and learned a lot from talking to each other. In my relationship with Bird, we never discussed music. He was quite a knowledgeable guy about chemistry and mathematics, but we never discussed music until we got on the bandstand.

“Bird was fairly easy to get along with, as long as you didn’t start a [cutting] contest with him. Most of those people were like that; Buddy Rich was like that and so was Sinatra. The people I was blessed to work with didn’t want a competition. It was such a wonderful time to live; all the people you admired, we were all growing up together.”

The silver-haired guitarist chuckles when asked whether the jazz pioneers he worked with were aware that they were making music that would have an enduring impact in decades to come.

“A couple of weeks ago Billy Taylor called me,” Lowe says. “We’ve been friends for many years and I played in his trio. We talked about that very subject and agreed that we were growing up and learning, and just trying to pay the rent. Looking back on it, it only became something extremely important, and perhaps worth keeping, when writers started to write about it and spread the word and created some interest with the outside world.”

Over the course of a career now in its seventh decade, Lowe has kept pace with some of the most formidable guitarists in jazz: onstage, on record and at private jam sessions. But the qualities that have always distinguished his playing have little to do with hot licks or florid runs. Rather, it’s his impeccable musicality and the unerring taste, cohesion and structural balance he brings to virtually any setting.

Graceful and urbane, Lowe doesn’t play a burst of notes when just a few will do, an approach he adheres to whether essaying a silken ballad or gliding through an accelerated bop workout. But his choice of what to play, and how to phrase it just so, reflects the finely honed aesthetics of a master craftsman who is always devoted to serving the music, and fellow musicians, at hand.

“I’m a huge fan of Mundell’s,” says ace bassist Bob Magnusson. “I got to work with a lot of that generation of guitarists–Joe Pass, Laurindo Almeida, Charlie Byrd–and Mundell is my favorite. He plays the fewest notes of all of them. But he has the best feel, rhythmically, and the best sound, musically, and he always chooses the most melodic lines. He’s also an amazing composer and a wonderful arranger.”

Lowe credits his economical yet eloquent approach to his early love for the tenor saxophone in general and to the sax’s single-line delivery in particular.

“I always wanted to emulate that approach to jazz, as opposed to lots of fingers and not many ideas,” he notes. “The people having a drink in a club, or even those in a concert hall, want to hear a kind of melodic approach, and the tunes they know played well, so that’s always been my thinking.”

Lowe, who was an early mentor to pianist Bill Evans and has worked extensively with André Previn, no longer maintains the almost nonstop pace he once did. (“When you’re 86, you start to slow down,” he says.) But he completed a concert tour of Germany and Austria last month, and is scheduled to teach a master class and perform a Christmas concert at Maryland’s Salisbury University on Dec. 12 and 13. In October, he and top English guitarist Martin Taylor played a duo gig at the San Diego jazz club Dizzy’s.

Due next year is a new album by Lowe and longtime friend and fellow guitarist Jaime Valle, who in July helped organize and stage an all-star San Diego tribute concert to Lowe. Held at the multimillion-dollar Anthology and broadcast live on KSDS-FM Jazz 88, the tribute featured Kenny Burrell, Russell Malone, Ron Eschete, Valle and Lowe, along with pianist Mike Wofford, flutist Holly Hofmann and other musical admirers.

“I met Mundell back in 1986, when I was living in Atlanta,” Malone told the sold-out Anthology audience. “At the end of the evening we were talking, and I said, ‘Man, how do you get that sound and those note choices?’ He said, ‘Living. After you’ve lived a while, you get all the crap out of your playing and you make music.'”

“Mundell is a national treasure and a real gentleman of the old school, like Cary Grant,” Valle says. “When he writes music he knows exactly what it will sound like, and he writes by hand. I’ve learned more from him in one year about how to play the guitar, harmonic ideas and tone, than I have in my life. He is a walking encyclopedia and such a great human being. Playing with Mundy is a very humbling experience.”

A Mississippi native, Lowe was barely a teenager when he started playing in various jazz bands on Bourbon Street in New Orleans. He was just 17 when he began a six-month stint working with Pee Wee King on the Grand Ole Opry radio show in Nashville. After serving in the military during World War II, the budding guitarist moved to New York and began to make a name for himself through his work with Holiday, Parker and other jazz giants.

He soon found himself performing with Cy Coleman on the early morning NBC-TV show A Date in Manhattan. A subsequent TV gig, The Kate Smith Hour, teamed him with Stan Getz and Kai Winding, while his tenure on The Today Show came as part of a 17-year stint as a guitarist and arranger for the network.

Lowe put his jazz career largely on hold after a 1965 move to Los Angeles, where he contributed music to TV (Wild, Wild West; Hawaii Five-O; Starsky and Hutch) and film (Everything You Always Wanted to Know About Sex, But Were Afraid to Ask; Billy Jack) alike. It was a lucrative time for the guitarist, who also found time to make albums with both Sarah Vaughan and Carmen McRae. He also hung out at L.A. jazz clubs whenever his schedule allowed.

But after 15 years Lowe found himself ready to return to the guitar, and jazz, full-time. He has rarely looked back since.

“Every morning after I finish my coffee and take my old age pill, I come upstairs and play for at least an hour,” says Lowe, who in the 1980s spent four years as the music director for the Monterey Jazz Festival.

“That way I keep the fingers trained and the brain working to some extent. Herb Ellis told me he never practiced at home because he wanted to get as far away from it as possible, until he got on the bandstand. And Paul Desmond told me he didn’t practice because he didn’t want to get too fast.

“I start very slowly, with some interesting scales and maybe some harmonic devices I’d like to be thinking of. What I try to do every morning is read and play a new or strange piece I haven’t played before. But you know what they say about us old beboppers: We don’t pass away, we just write another tune.”

A Grand Night for Swinging (Riverside)