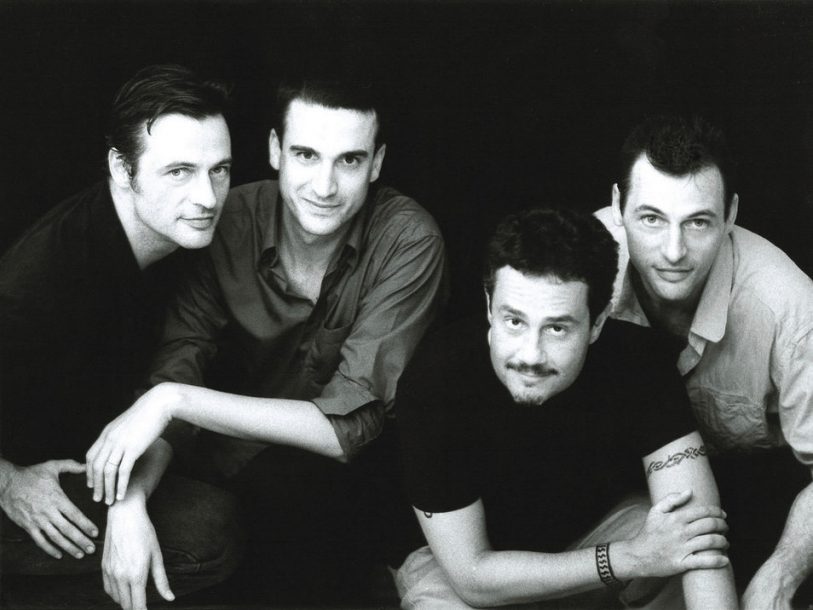 What do you get when you combine twins separated by an ocean-bassist François (in New York) and drummer Louis Moutin (in Paris)-with expat saxophonist Rick Margitza and young firebrand pianist Baptiste Trotignon (both in Paris)? A band with feet on both sides of the Atlantic that ably defies distance, manages to remain creatively in sync and employs long-distance phone lines to compose material.

Moutin Reunion Quartet’s music might be called acoustic fusion because the band uses structural devices and sonic elements reminiscent of various ’70s groups. In performance, improvised mini-suites-with smoothly executed interstitial passages-are the group’s trademark. At times the syntax seems slightly off: solo, head, drum and bass dialog, head, solo and out. But the Quartet never loses the compass. The group consistently shows instrumental confidence (François’ bass prowess is a marvel in itself) and a unified approach rare even among groups with all its members residing in the same postal code.

Born on Christmas Eve and raised in Paris, Louis says the brothers “shared the energy of all those jazz records at home and together we found how to play. François was good with things like chords and harmony, and for me it was rhythm. I came to play piano, he came to play guitar and then went to the bass. Then way after that I went to drums.” That they would form a rhythm unit seems inevitable.

By the late ’80s, the brothers became the go-to backup team in the Parisian jazz scene for both the established (like Martial Solal) and the up-and-comers (pianist Jean-Michel Pilc.) They formed their first group to critical acclaim but disbanded when François relocated to New York City in 1996.

But in 1999 the brothers were talking on the phone, as François recalls: “Louis played for me a composition he had just written. That’s when I went, ‘Hey, we need to do a band again.’ So we got these two French guys-the sax player Sylvain Beuf and Baptiste Trotignon on the piano-and that went really great. Actually, the composition my brother played to me-‘Sailing Through the Clouds’-is on our new record.”

With Margitza replacing Beuf, the MRQ stand poised to win American praise. Their new album Red Moon (Sunnyside)-the group’s third-received veteran production input and guidance from George Avakian, is elegantly packaged in a striking, die-cut case and is filled with compelling musical moments. “Elle Aime”-a pun on Louis’ and his son’s initials-skips along lightly and smartly. The opening of “Apollo 13th” and the title track both conjure the fusion era. “Sailing Through the Clouds” receives its first recorded outing.

François: “All the tunes that are here we work on by ourselves-”

Louis: “-and in the three months before we went into the studio, we played all these tunes in 20 concerts or more.

François: “On the road we talk about it, play them and change them. Actually the more we change them the more they become open and the more you can feel the influence of Baptiste and Rick on it.”

Revising and recording Chick Webb’s “Stompin’ at the Savoy” was, according to Louis, “Typical François. He loves to do kinds of things like that-he’s the guy who has those ideas on standards.”

If one tune serves as a fraternal emblem, the bass-and-drum treatment of Charles Trenet’s classic chanson “La Mer”-replete with Louis’ hands-on-snare drive and François’ voicelike exhortation of the melody-fits the bill and also contrasts their supportive role for the band’s other half. Says Louis: “You can find our relationship in the first track-”

François: “-and it’s not about that tune specifically. It’s more about the interaction between us when we are free to play together. That track is very representative of how we can really work in telepathy almost.”

Louis: “But on the rest of the album, we are just like the rhythm section that is comping beside those two marvelous guys, who are not twins. I mean, they are marvels. Baptiste is so great and so young, and Rick’s way of playing-the sound he’s got, and the phrases he plays-it’s so poetic.”

Asked separately to describe how Red Moon stands out from past efforts, Louis answers, “I think that we are-how can I say it?-a little bit more in the center of ourselves.”

François echoes, “On this one I can hear that we have reached a certain style, some kind of center.”

Se centrer is the French verb both were referencing, they later admitted. In English, the verb translates to finding one’s spiritual-possibly musical-identity. In the far-flung world of Moutin Reunion, the creative center-to paraphrase an old spiritual saw-lies within.