Skip to content
Become a member and get exclusive access to articles, live sessions and more!
Start Your Free Trial
Home > JT Archives > Mostly Other People Do the Killing in Pittsburgh 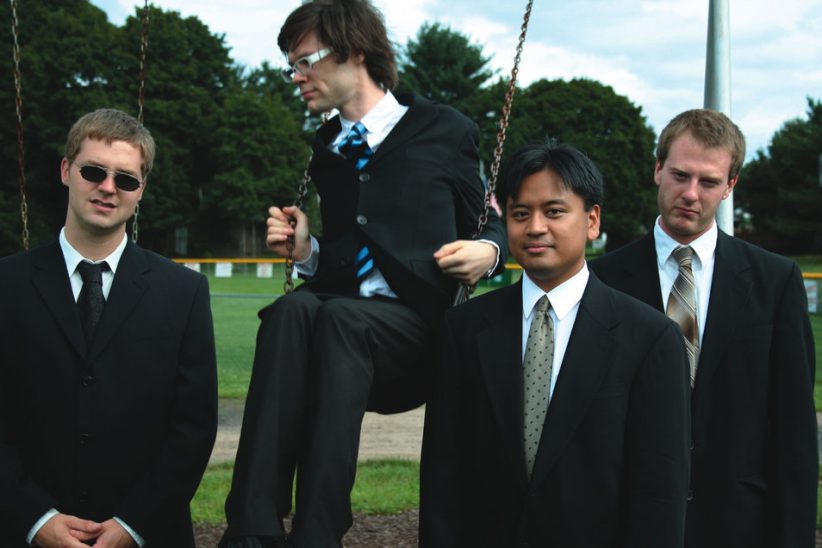 To be sure, the quartet that goes by the name Mostly Other People Do the Killing consists of jazz progressives. They refer to themselves as a “terrorist bebop über-jass band.” They spoof album covers by Art Blakey and Ornette Coleman. As four music school students, including a drummer that has also played in some pretty challenging underground rock bands, it’d be easy to write them off as a group of miscreant conservatory types.

MOPDTK’s Pittsburgh appearance proved that rather than building their repertoire predominantly on irreverence or parody, they prefer to draw on any and all nuggets from post-war jazz. Saxophonist Jon Irabagon recently won top honors in the Thelonious Monk Jazz Institute’s International Saxophone Competition, and here he was blowing freely over an avalanche of Kevin Shea’s spastic percussion and Moppa Elliott’s bass scraping. Not many bands could bridge such a gap. As Shea told this writer prior to the appearance, “We’re not trying to make fun of anything. There are many kinds of music that are fun to play so we should be able to explore however we want and not feel guilty about cutting and pasting ideas.”

Everything about the evening had an unorthodox feel to it. The Rex Theatre rarely hosts touring jazz acts, even the more underground ones. The sparse audience ran the gamut of 20-something music geeks to a few old-school veterans who sat through the whole set. The opening act, Pittsburgh’s Ryan Socrates Group, played a set that was well executed but comparatively mild and in the standard style at which MOPDTK seems to poke fun. But everything about the evening seemed to converge for the right reasons.

The band got down to business right away. Without a word to let listeners know sound check was over, Shea hit a press roll and launched into a frenetic solo that became “Handsome Eddy.” During the tune’s duet passage with trumpeter Peter Evans, the drummer nearly knocked over his artillery, cradling a cymbal as he rolled over his kit. Evans responded in kind, reducing his solo to the sound of air blowing the horn, which worked from a dynamic standpoint.

Elliott, who writes the band’s music, has a penchant for catchy melodies built on traditional styles, like the blues or a boogaloo vamp. All are named for cities in Pennsylvania, as well. “Two Boot Jacks,” named for a couple of cities, sounded like a country vamp. The rhythm section took this romp into double time while Irabagon-on tenor all night rather than alto-unleashed a solo full of strong melodic lines. During his solo in “The Hop Bottom Hop,” Elliott and Shea kept literally fading out and returning like a bad radio signal. Once they reentered playing with a thrash beat. Clearly fun was the mood of the evening.

In a few songs, Elliott mastered the art of two-handed melodies, rapidly plucking the upper register with his left hand while his right pounded out low double-stops. Shea proved that he could someday inherit Han Bennink’s throne as the master of zany solos. Along with all the free pounding, one solo involved triggering a sampler with his sticks, which included the voice of a soul radio DJ and some disco beats blasting in short fits and starts.

When MOPDTK closed their set with an as-yet-unrecorded tune called “Mars and Venus,” they began playing things pretty straight, in theme and solos. Evans used a wah mute, his hand and finally a plunger to give the whole thing a gravelly mood that Charles Mingus might’ve admired. If the group records this tune, maybe they should call the next album The Shape of Jazz to Come-And We’re Not Kidding.