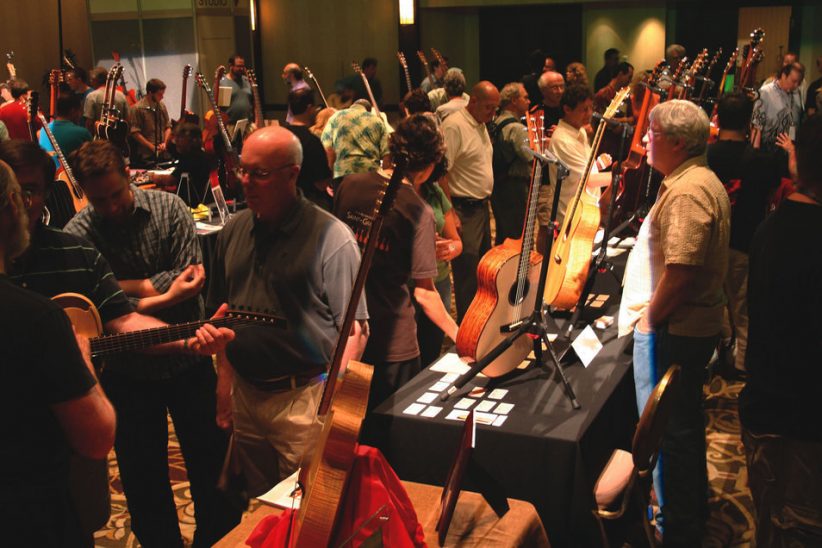 The crowd at the 2008 Montreal Guitar Show

What instantly separates the Montreal Guitar Show from all other guitar shows is the absence of any corporate logos during the six-string summit north of the border. No Fender or Gibson or Yamaha lettering on any headstocks, no promotional posters or slick point-of-purchase displays. Instead, this annual showcase is for individual artisans who craft unique handmade guitars and deal in one-on-one relationships with their customers. No factories, no automation, no mass production; it’s strictly a purist hang. As luthier Ervin Somogyi puts it, “Factories make guitars for a mass market, luthiers make instruments for individuals. To compare them is analogous to comparing a painting with a refrigerator or toaster … or a custom-made suit to one bought off the rack.”

The second edition of the best-run guitar show in North America, held in conjunction with the Montreal Jazz Festival, took place June 27-29. For those three days, guitar enthusiasts could (for a mere $10 admission charge) enter the Grand Salon of the Hyatt Regency, gaze upon the handsome handmade objects and, with a few polite inquiries to the luthiers, actually play them-either in the open space or in any number of soundproof booths located throughout the exhibition hall for more private inspection of the goods. For guitar enthusiasts, it was a quintessential kid-in-a-candy-store scenario.

A hundred luthiers came from Quebec and the rest of Canada, throughout the United States and Europe, including a delegation of 17 from France. Stefan Hahl, from Frankfurt, Germany, displayed several of the superbly handcrafted Maccaferri-styled guitars he built for Gypsy guitar great Biréli Lagrène, along with two gorgeous archtop models that were signed by the artist himself. Hahl confided that 60-year-old German Alps spruce was the secret ingredient to getting the incredibly resonant quality of these beautiful guitars. hahl-guitars.com

Marc Saumier, from Kinsgbury, Quebec, is a lumberjack-turned-luthier. As he likes to say, “I get a kick out of chopping the tree and seeing what it can be.” He harvests wood from the eastern township near Montreal, where Adirondack red spruce (“the Holy Grail of spruce”) is plentiful. A carpenter by trade, he builds furniture and houses for a living. “Building guitars is something I love but it’s not my main source of income,” says Saumier, who opened his guitar shop in 1996. He takes great pride in producing natural-looking Manouche-style guitars and sculpted archtops that don’t have any lacquer or nitro cellulose for that shiny, glassy effect.

“That stuff is very toxic and I choose not to work with those things, although most luthiers do,” he says. The orange shellac that he uses on some of his red spruce instruments gives the guitars a distinctive caramel color. He also tiles together scraps of cherry, poplar and butternut wood into intricate mosaics around the soundholes of his instruments while using touches of lilac wood for subtle coloration on the fretboard. saumierguitars.com

John Kingslight, from Portage, Mich., carefully hand-builds his acoustic guitars using Alaskan Sitka spruce for the top, rosewood for the sides and back with cherry binding, an ebony rosette headplate and ebony fingerboard. He applies KTM-9 tru-oil finish to give a natural look to his instruments, which resonate with superb tone, project with incredible volume and play like a dream. Along with his regular cutaway and dreadnaught models, Kingslight also offers a deep-sounding baritone 12-string model, which has a 28 1/2-inch scale-length neck instead of the usual 25 inches and is tuned to a low A using an .080 gauge string rather than a low E with a .056. He also makes a humungous-toned fretless acoustic bass guitar with visible fret markers on the neck to help with intonation. kingslightguitars.com

Judy Threet has been building individually hand-crafted acoustic guitars at her shop in Calgary, Alberta, for 16 years. She uses mother of pearl (black, white, gold) for her beautiful inlay work on the headstock of her instruments and favors nature studies for her inlay designs, ranging from images of geese, polar bears and owls to turtles, lilies and nautilus shells. She also specializes in small-bodied guitars. “I love little guitars because they’re so comfortable to play and they’re fun to build,” says the former philosophy teacher. “The trick is to make them louder.” threetguitars.com

Native New Yorker Otto D’Ambrosio learned his craft while apprenticing with luthier/repairman Flip Scipio at the famed Mandolin Brothers on Staten Island. After a valuable apprenticeship with luthier John Monteleone, D’Ambrosio moved to R.I. to work at the Guild factory, where he got “an amazing education in the difference between European woods (stiffer, more projection) and domestic woods (softer, bassier sound).” D’Ambrosio opened his own shop in Providence, R.I., in 1997 and continues to produce uniquely handcrafted instruments like his Model O-Two (pictured at left) with oversized soundhole for great projection and increased bass response. D’Ambrosio has also designed a thin hollowbody electric guitar with Seymour Duncan humbucking pickups that is surprisingly light and produces one of the creamiest natural tones I have ever heard from an electric guitar. dambrosioguitars.com

Some other eye-catching axes at the show included Ken Parker’s elegant archtop acoustics that look like Zen-like expressions of simplicity and play like butter (kenparkerarchtops.com), Wade Sylvester’s ornate Italian Zorzi-styled archtop guitars and unique mandoleles (wadefx.com), Bernie Lehmann’s stunning ribbed-back acoustics that project incredibly well (lehmannstrings.com) and Fred Pons’ bizarro electric guitars, which he created for the French Kopo Lutherie (kopo.fr). But the single most attractive guitar I encountered was the sensuous, caramel-colored Contessa archtop made by Peter Hopkins of British Columbia. As the brochure for this gorgeous $6,900 ax states, “Its visual purity is echoed by its purity of tone.” hopkinsguitars.com