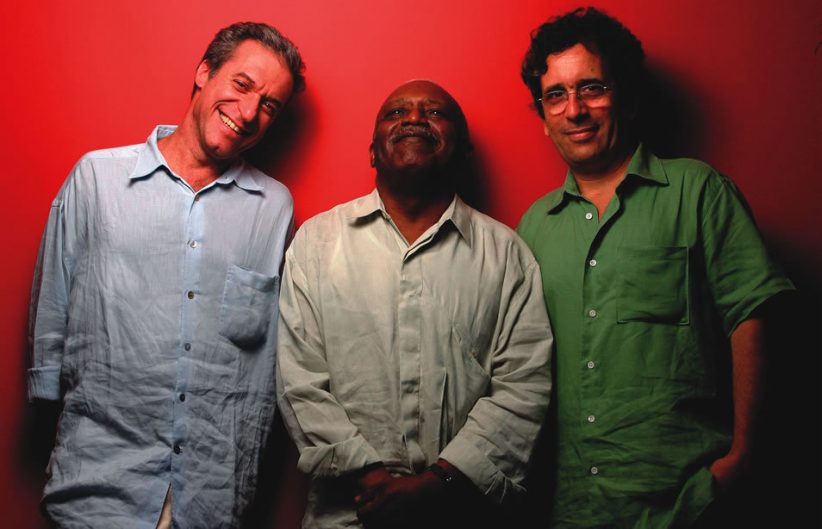 Following up the magisterial two-disc set Ouro Negro, coproducers Mario Adnet and Ze Nogueira have given us another essential item in the Moacir Santos library. Now nearing his 80th birthday, Santos is a giant of Brazilian music but a Southern California resident since 1967, where he has worked mainly as a film composer and a teacher. He recorded for Blue Note briefly in the ’70s, thanks to a supportive push from Horace Silver. But his work from this period was practically lost to history until Adnet and Nogueira, with Santos’ blessing and participation, wrote the sumptuous new arrangements for Ouro Negro.

A comeback album of sorts, Ouro Negro is heavy on vocals and features such high-profile guests as Gilberto Gil, Djavan and Milton Nascimento. Choros & Alegria, by contrast, is almost entirely instrumental. It includes more of Santos’ songs from the mid-’60s and ’70s but also reaches back as far as 1942, when Santos was 16. Six of the tracks, in fact, are from the ’40s, and the closing “Felipe” is from 1991. While more concise than Ouro Negro, Choros & Alegria documents an even wider swath of Santos’ lifetime in music. Most of the material is previously unrecorded.

If there is a flaw on Choros & Alegria it is in the packaging, at least on my copy: Nine of the 15 tracks are listed in the wrong order in the booklet, though correctly on the back cover. The inconvenience is easily outweighed by the music, of course. Wynton Marsalis, a noted Santos admirer, stops in for a cogent solo on “Rota ? [Route Infinity],” a minor-key tune in three. This is the only big cameo, although Ricardo Silveira, playing electric guitar throughout, will be familiar to many American listeners. The album boasts rock-solid musicianship from a Brazilian crew, with Adnet jumping in on acoustic guitar and Nogueira adding the occasional soprano sax. Santos, who supervised the proceedings, sings on three tracks (two are wordless melodies). Most of the pieces were transcribed, arranged or reorchestrated by either Adnet or Nogueira, but on “Excerto No. 1” (from 1968) we hear Santos’ original score, which is strikingly innovative. The only track without guitar or piano, it features finely wrought four-part saxophone writing, beginning as a rubato chorale with arco bass.

Santos’ work from the ’40s tends to be more straightforward rhythmically, with samba- and choro-based rhythms and winding melodies that almost resemble Bach inventions. One of these is “Ricaom” (the composer’s name backwards), which features the Trio Madeira Brasil with guitarist Ze Paulo Becker, seven-string guitarist Marcello Goncalves and mandolinist Ronaldo Do Bandolim. There is a rural folk quality to the piece, as mandolin and guitar pass the busy melody back and forth. The other cuts are just as varied in color, with trombone, bari sax, clarinet, flute, piccolo, accordion and other instruments intersecting in unison, harmony or call-and-response, supported by warm reed-and-brass backgrounds.

The later, more modern compositions, such as “Agora Eu Sei [Now I Know],” “Outra Coisa [Another Thing]” and “Lemurianos [The Lemurians],” rest on more atypical rhythmic foundations. “Paraiso [Paradise]” begins with a slow march figure on snare drum and blossoms into ballad harmonies reminiscent of Mingus and Ellington. “Felipe,” which Santos sings with a small children’s chorus, is full of warmth and spirit, and it illustrates Santos’ gift for the ingenious yet perfectly logical harmonic twist. This one occurs in the 10th bar of the tune, and it’s exactly the sort of thing that makes a good melody great.