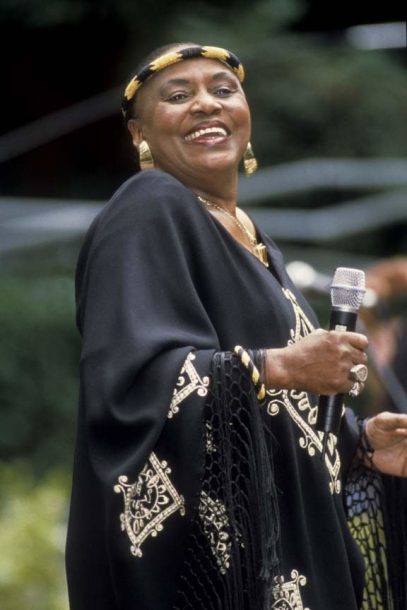 Miriam Makeba is, hands down, the most important female vocalist to emerge from South Africa. From her earliest years with the Manhattan Brothers in the 1950s, and for five decades thereafter, she has remained an important figure in the growth of African music.

As with most South African musicians, her life was not an easy one. The daughter of a mystical healer from the Xhosa tribe, she was imprisoned while still in her infancy. Many years later, while in her late 20s, her citizenship was revoked because of her outspoken views about apartheid. For the next three decades, she was forced to claim herself as a “citizen of the world.” And yet, despite this and other struggles, she remained optimistic and forward thinking throughout her life.

I first met Miriam, known to so many as Mama Africa, at the Cape Town International Jazz Festival in 2006. We shared a meal and had some wonderful conversations, not just about music itself, but also about how great music can transcend ethnic and cultural boundaries and bring people of diverse backgrounds together.

We met several times after that, once at the French ambassador’s residence in Pretoria, South Africa, as we discussed the idea of recording her classics with opera singer Barbara Hendricks and the Johannesburg Symphony Orchestra. Unfortunately, circumstances prevented the idea from materializing, but the fact that she would even entertain such a bold and innovative concept speaks to the broad and ambitious scope of her creative vision.

We did record Reflections, which was released in 2004. It was an opportunity to revisit some of her classic songs (“Pata Pata” and “The Click Song”) with updated arrangements, as well as some Brazilian pieces and other new material. Clearly she would not allow herself to be limited to any particular style or be hampered by anyone’s preconceptions.

I have always loved Miriam’s approach to a song. She could sing effortlessly in several different languages, and she was a true storyteller in every one of them.

My only regret is that I didn’t have more time and more opportunities to work with her. More than a great musician, she was an inspiration, not just to the people of her own nation, but to anyone anywhere who recognizes the transformational power of music.