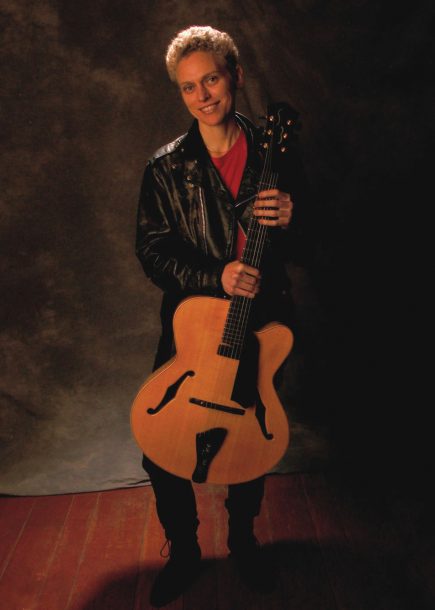 I’ll admit it: I had a male chauvinist, New York-centric, knee-jerk reaction upon receiving Mimi Fox’s She’s the Woman in the mail. A woman guitarist from the West Coast? Must be some tame smooth-jazz stuff, I figured. But it was clear from the first few bars of the opening track, the aggressively swinging “East Coast Attitude,” that I was sadly mistaken. There’s nothing tame or smooth about the way Fox kills on this boppish romp.

As the New York native and longtime Bay Area resident explains, “There’s certainly an intensity on the East Coast that you don’t get out here, and this tune reflects that in-your-face kind of ‘Whaddaya want?’ attitude as opposed to ‘Can I help you?’ So my experience of growing up on the East Coast in Queens is still very much with me. I may have lost my accent, but I have not lost my attitude.”

Which just goes to show that you can take the girl out of Queens but you can’t take Queens out of the girl.

Elsewhere on Fox’s stellar debut for Favored Nations Cool, a new jazz division of the label founded by rock guitar virtuoso Steve Vai, she showcases her six-string prowess in a variety of settings, from her Wes Montgomery-inspired octave work on “Buddy’s Blues” and “Raquel, Mi Amor” to her virtuosic Joe Pass-like solo guitar turn on “Darn That Dream.” Other highlights include Fox’s use of bell-like false harmonics on an easy-swinging rendition of “On the Sunny Side of the Street” and her duet with bassist Ray Drummond on a funky interpretation of the Beatles’ “She’s a Woman” that is bristling with Pat Martino-style streams of single notes. All throughout She’s the Woman, Fox distinguishes herself as a remarkably accomplished straightahead player with flawless time, pristine execution, serious chops, a keen ear for chordal voicings and reharmonizations as well as possessing an inner urge to burn.

It might seem odd that Vai called on a jazz musician, but Fox says, “He called and said, ‘I’m really impressed with your stuff and I’d like to talk to you about possibly doing a project together.’ So when I went to the NAMM show in Anaheim, I stopped down to Los Angeles and met with Steve in his studio, and we just totally hit it off. I’m a Jewish girl from Queens; he’s an Italian boy from Long Island-what else can I tell ya?”