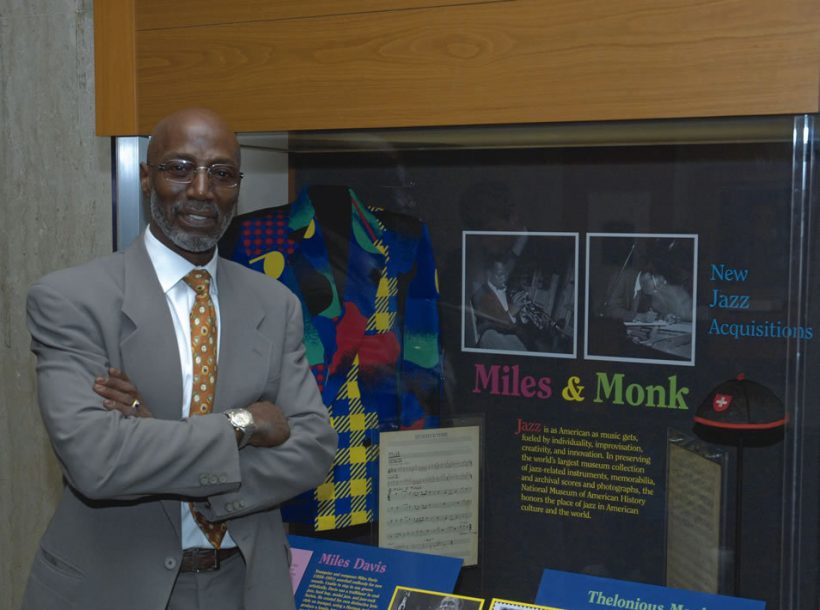 During a March 30 ceremony in Washing-ton, D.C., to mark Jazz Appreciation Month, family members of Davis and Monk shared remembrances as they made their donations.

The Davis family donated a sheaf of manuscripts with parts for Gil Evans’ arrangement of George Gershwin’s “Summertime” from their 1958 album Porgy and Bess; an electronic wind instrument that Davis experimented with; and the Versace suit worn by the trumpeter during his historic performance at the 1991 Montreux Jazz Festival in Switzerland.

Davis’ nephew and former drummer Vince Wilburn Jr. led a group of family members including Davis’ son, sister and one of his brothers.

Wilburn keeps Davis’ personal belongings in his home, and he spoke of a visit by museum curator John Edward Hasse. “I was trying to decide what to donate when John came by to visit. At the end of the meeting John said, ‘OK, I have to go now, what can I take?’ I said, ‘Can we just send something later?’ I didn’t want to give anything up.”

Thelonious Monk Jr., also known as TS Monk, presented the Smithsonian a handwritten manuscript for “Four in One” recorded in 1951, one of his father’s famous skullcaps and other clothing items including a jacket, vest and ties.

Monk spoke of his namesake not as a jazz musician but as a devoted father. He also said Davis would often come by the Monk apartment in New York: “I was the official door opener at the Monk palace, one and half rooms. I distinctly remember going to the door and this really good-looking little black guy would come to the door and he would say [imitating the famous Davis rasp], ‘Would you tell Thelonious [that] Miles is here?’ Then he would come in and sit while my father was just laying in another room chillin’. And that would go on for about an hour and a half.”

Photographer Herman Leonard’s work has been recognized around the world for its artful interpretation of the early days of modern jazz. But he told the Smithsonian audience this event went above and beyond. “Many years ago a psychic told me the sequence of my life, including this. Now this is about 40 years ago. She didn’t specifically site this but she said, ‘You will receive recognition for all the effort you put in your early life.’ And believe me, having my work in the Smithsonian is really one of the great events of my life. My mother would have been proud.”

The donated items are in good company. Other artifacts in the Smithsonian collection include memorabilia from Ella Fitzgerald, Lionel Hampton, Tito Puente, Artie Shaw, Mongo Santamaria and Duke Ellington.