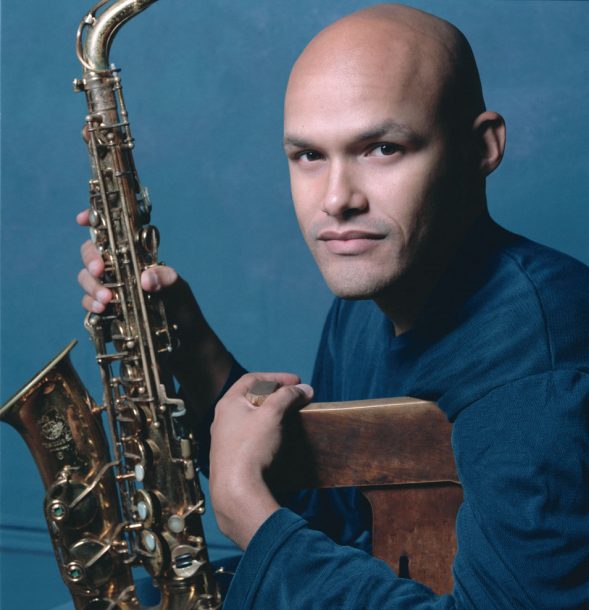 Miguel Zenon is searching for that singular sound that’ll distinguish him from the rest. The 26-year-old has been fashioning a supple, arid tone on the alto saxophone for the past few years. “I have the conception of what I want to do in my head,” he says. “But I’m not completely satisfied with where I am right now. It’s not really about sounding hard, soft, fast or anything like that; it’s more about having a singing quality. I feel like I’m on the right track, though.”

Many listeners would agree. Some would even argue that he’s already found an enticingly lyrical, highly recognizable sound, judging from the critical acclaim for his performances and recordings with fellow saxophonist David Sanchez. Zenon gained more praise for his bracing 2001 debut, Looking Forward (Fresh Sound New Talent), which features him in tandem with eight dynamic musicians (including Sanchez) and showcases his fascinating, modernistic compositions.

Ceremonial, his debut for Marsalis Music, will certainly propel Zenon’s name even further. The Branford Marsalis-

produced CD features seven originals along with a Silvio Rodriguez tune (“Leyenda”) and the hymn “Great Is Thy Faithfulness.” This time, though, Zenon pares down the ensemble to a core quartet, comprised of pianist Luis Perdomo, bassist Hans Glawischnig and drummer Antonio Sanchez, with the addition of vocalist Luciana Souza on “Transfiguration” and percussionist Hector “Tito” Matos on “Mega” and “440.” Zenon says that this was his “dream band.”

Indeed, Ceremonial boasts a wonderfully emphatic group, enabling Zenon’s sometimes soaring, sometimes dovetailing alto to sing joyously. Compositionally, he’s still molding a compelling modern fusion between Latin music and jazz, but on this CD Zenon places more emphasis on melody than rhythm. His tunes and playing exude a yearning, elliptical splendor. That quality shines brightly on Zenon’s spectral “A Reminder of Us” and the dreamy “Transfiguration,” and especially on his glowing reading of “Great Is Thy Faithfulness.” “That’s a hymn that I’ve been listening to since I was a kid,” he says. “I’ve always felt very close to the lyrics. It reminds me where I come from.”

Like David Sanchez, Zenon grew up in Puerto Rico. They even studied saxophone under the same teacher, Angel Marrero, at Escuela Libre de Musica. But Zenon didn’t meet the tenor titan until he moved to Boston to attend Berklee College of Music. “I met David through Danilo Perez,” Zenon says. The altoist then headed to the Big Apple to get his master’s degree at the Manhattan School of Music. “When I moved to New York, David was basically one of the few people that I knew.”

Zenon started playing music at the age 10 while growing up in San Juan’s Santurce district. He took free music lessons from a neighborhood elder. “He’ll teach you the basics. And once you learned that, you’ll tell him what you wanted to play,” Zenon says. The piano was Zenon’s first inclination, but it wasn’t an option because his teacher led a marching band. So, Zenon chose the saxophone for, as he remembers, “no particular reason.”

As Zenon’s musical interests expanded while attending Escuela Libre, he got his first whiff of jazz. “I didn’t know anything about improvisation,” he recalls. “The closest thing that I knew about jazz was Latin dance bands. They would have solos, but they really weren’t jazz bands. Some of my friends started talking about Charlie Parker and Paquito D’Rivera. Then, I started listening to the University of Puerto Rico’s radio station, which plays lots of jazz. I would tape the shows and bring them to school. The first thing that really blew my mind was this record of Charlie Parker with the Machito Orchestra called ‘Mango Mangue.’ I listened to that everyday, but I didn’t know anything about music theory. I would try to improvise, but I didn’t really know what I was doing.”

But for all of Zenon’s emersion into music during his formative years, he viewed it mostly as a hobby. His original career goal was to become an electronics engineer, even getting accepted to the elite University of Puerto Rico at Mayaguez-the Caribbean’s main school of engineering. “It was really a hard decision for me,” he says. “But I feel like I made the right choice [with music]. I realized that it’s so great to do something that you really love and get paid for it, even if you don’t get rich.”

We’re also lucky Zenon made that choice. Since playing with Sanchez, Bob Moses, the Either/Orchestra and the Vanguard Jazz Orchestra, he’s emerged as one of the most significant new jazz voices.