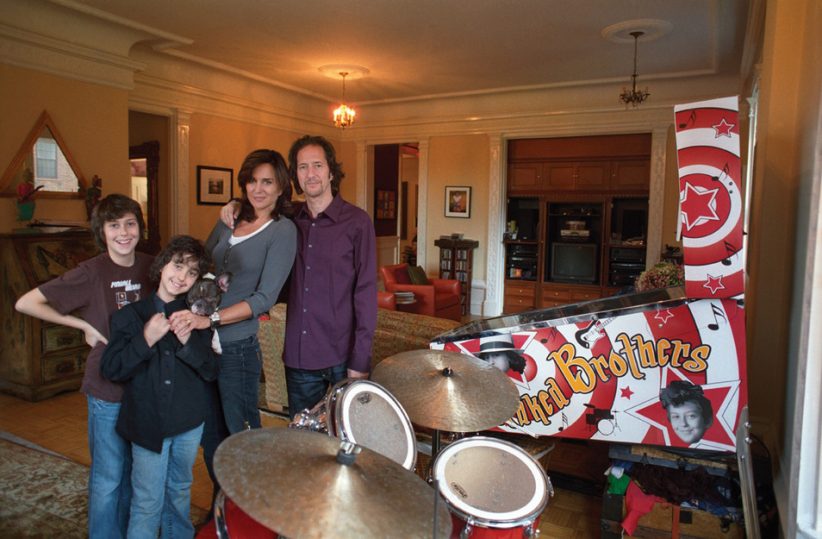 There are only two residents of pianist Michael Wolff’s Greenwich Village household you might not ask for an autograph. One is E.T., the family’s appropriately named French bulldog. The other is Wolff himself, who, despite a five-year, high-profile stint as Arsenio Hall’s Los Angeles-based bandleader, doesn’t quite have the star quality of his actress-director-producer-wife Polly Draper or his sons Nat and Alex, who are featured on Nickelodeon’s cable-TV hit The Naked Brothers Band. For Wolff, raised the son of a Jewish doctor in Memphis and New Orleans, this is a far cry from what he first experienced as a young musician settling in Manhattan in the 1970s.

“I never thought about the future. I just thought about the music. I just figured I’d play piano and see what happens,” he says. “It wasn’t like now, where musicians seem to know about business and have a business plan. I didn’t even have a plan for the next month. I was just trying to figure the music out. I would stay home and practice and go out about midnight and listen to music until about four or five in the morning, because everything was open late.”

Wolff’s scuffling days in New York eventually led to a gig as Nancy Wilson’s musical director, during which he roomed with a comic named Arsenio Hall, who was her opening act. The two bonded and the young Hall offered that if he ever made it big, Wolff would be his bandleader. He was right and the Hall gig introduced Wolff to Hollywood and, in 1989, the woman who would eventually become his wife. Draper starred in the television series Thirtysomething.

The living room of Wolff’s large but unpretentious lower Manhattan home features a Naked Brothers pinball machine, a CD jukebox stocked with Beatles tunes, a television entertainment center, some small chandeliers, a Steinway piano, a set of drums and a mini basketball hoop. Talking to Wolff you sometimes have to wonder who gets more pleasure out of all the toys.

The things around the house are a reflection of Wolff’s belief that the children should be raised as “normal” as possible. “The kids got into [acting] because they grew up in our household, where they just assumed everybody’s a musician or an actor or something like that. They see Polly either doing a movie or a play or a television show and then she might go away for a couple of weeks. Then mommy comes home, then daddy goes on the road and then he comes back. Or dad’s playing a gig and they come to them,” he says.

When Draper was pregnant with Nat and Alex, Wolff said, he would play music up against her stomach. “I was playing Thelonious Monk CDs on her belly and all that kind of stuff: Ravel, and my stuff and Miles. I started them early. I ruined them, man. But, to their credit, at a certain point they said, ‘Dad, I’m not doing that jazz stuff, I’m doing rock and roll.'”

Wolff said that since he and Polly are both in the business, they’re really not stage parents. “No way. I don’t want to be hanging around. That’s why we have to do it like this. Basically, my wife said, ‘You want to act? I’ll write you a movie. Let’s just do it as a family, get it out of your system.’

“They go to a really hard [private] school. They each take three music lessons a week. They’re on basketball teams. They do their stuff for the show. They’re writing music. They have promotions. They’re really, really, really busy, but they dig it. They’re happy. We’re not stage parents. We’re not running them out there to make money on them. We’re just like, ‘Hey, you want to do it, let’s have fun. As long as it’s fun, you can do it.’

“My oldest son [Nat] is just an amazing singer-songwriter, amazing pianist. When he was about four or five years old, he just started playing. He learned all the major and minor chords on the piano. I said, ‘How did you learn them?’ He said, ‘Dad, they’re right here.’ I said, ‘What are those chords?’ He said, ‘These are my proud chords.’ And he could just do it.”

Wolff’s own father encouraged his son to follow his muse, he says. “He grew up in the same town as B.B. King, Albert King and Muddy Waters and he loved the blues. When I was about four he taught me to play ‘St. Louis Blues’ on the piano. My dad was really hip,” Wolff says. “He said, ‘Look, man, don’t be a doctor, don’t be a lawyer, do something hip. Be a golf pro, be a jazz musician. I did it, you don’t have to do it.'”

Working With a Spouse

Wolff has Tourette syndrome, a condition that, depending on severity, can be manifested in uncontrolled physical tics and swearing. In his case, it can be detected in a mild vocal “hmm.” Otherwise, the condition is undetected. His wife, though, saw an opportunity to alert more people to the condition, and thus wrote and produced the movie The Tic Code.

“It’s a pain in the ass sometimes for me, going to a play or a movie and trying not to bug people,” he says. ” I know I make some noises sometimes. But my wife was able to take that and use that in a dramatic way. It was Gregory Hines’ last film and he’d always wanted to be a sax player. So that worked out great. It was a great experience for us. It was our first feature film we worked on together.”

“One of my favorite places is Il Cantinori, an Italian restaurant over on 10th Street. I love the Union Square Coffee shop. A friend of mine owns it. It’s a really great restaurant. It’s open 24 hours. I go there a lot with a couple of the other fathers who drop off their kids at school. We call it ‘the breakfast club’ ’cause it has all the pretty waitresses, so it’s all these old guys going, ‘Hey…'”

“I love Five Easy Pieces,” he said, breaking into an impression of Jack Nicholson. “I love Jack. I like that era of movies, the 1970s, all of those. Alice Doesn’t Live Here Anymore. I love anything that Julie Christie was in. … I just like a lot of old movies.

“I’ve been playing a little bit of golf lately. I’m not good, but I play a little bit. It just takes too long. Golf takes forever. Golf is very, very Zen-like and my father was a great golfer. He won the Memphis pro-am when I was a kid. Two days before he died, he shot a 74. I was never like that.”

“My father, when we were in Memphis, was an internist and he was Elvis’ mother’s and aunt’s physician. Of course, he wouldn’t tell me that when Elvis was alive, but he told me after. He said that Elvis would come by and pay the bill. He said he was a really nice guy; he’d just come in the office and pay him: ‘Hey, doc, how much I owe you?'”