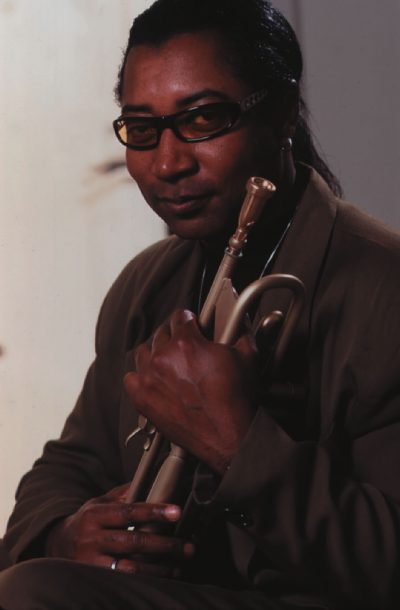 What is it about New Orleans and the trumpet? From Storyville days to post-Wynton, the brass line has been unusually vital and distinguished. Add Michael “Patches” Stewart to the waiting list of the hometown hall of fame.

Like his Crescent City brethren and sistren, Patches was exposed to music early on. “The year before I went to junior high, their school orchestra came to my elementary school,” recalls Stewart. “Three trumpet players played a classical piece, ‘Bugler’s Holiday.’ It was beautiful. That changed my life I think…after that I just wanted to play.”

At 16 he was picked by Allen Toussaint to play on the recording sessions that yielded Labelle’s smash hit, “Lady Marmalade.” A hard-driving rookie with an eye on Clifford, a soul hooked into Pres and a mind gazing at Sonny, young Patches gradually matured into a respected player sought for both recording sess-ions (Whitney Houston, George Duke) and concert tours (Al Jarreau). His current gig is with bassist Marcus Miller. Still, the role of star backup has with time proven to be fulfillingly frustrating for Stewart-something was missing.

Late last year, Patches decided to step out front. “I liked what I was doing, but I decided to come out different,” says the trumpeter. The “different” he’s referring to is blue patches (Hip Bop Essence), a veritable audio basement of blue lights. “I went for a more cool relaxed sound to bring the listener in, sit down and turn the lights down low.”

A showcase for Stewart’s sensuously fluid, blue teardrop of a tone, improv skills and mastery of the mute, blue patches breathes new life into a set of old ballads (“Alone Together”) and bop (“One for Daddy-O”). Of his record and his vocation, Patches is philosophical: “The joy of music, especially jazz, is that it’s a constant challenge-you never know what’s going to happen day to day. I can really express myself best, I try to play what I feel instead of trying to copy licks.”