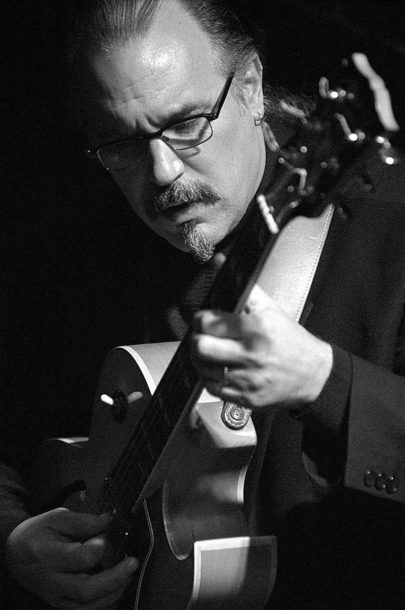 Guitarist Michael Musillami may shake some widely held assumptions about his style and music on his latest release, Beijing (Playscape). The trio date features arresting interplay between guitarist Musillami, bassist Joe Fonda and percussionist George Schuller, and the session has a fresh, vibrant sensibility despite the fact that Musillami has previously recorded every piece on the CD. “Doing this in a trio context helped me look and approach them differently,” he says. “It was really like they were new pieces, because Joe and George kept finding new things texturally, and I could respond to that.”

On Beijing, Musillami pays close attention to dynamics and mood while displaying the frenetic touches, slithering lines, and dissonant edges that have characterized his other releases. “This album was really about getting down on record the kinds of things Joe and I have done in live sets,” Musillami says. “We’ve developed a kinship and closeness that I think is really reflected in the songs. It wasn’t a situation where we felt we had to do any particular type of thing or make any special statement beyond expressing what was happening during the recording.” Although Musillami’s not performing conventional mainstream selections on Beijing, there’s a peaceful, contemplative sensibility that emerges during his solos on the title cut and “Op-Ed,” the disc’s two longest pieces. Schuller and Fonda prove genuine collaborators who don’t sit back and wait for Musillami to establish the pace, instead directly influencing each number through subtle rhythmic changes and adjustments.

Beijing also reflects Musillami’s personality in that he enjoys dispelling restrictive notions about his approach. When told that this disc has a more mellow sound than expected, he says, “Well, I’ve got a background in a lot of things that aren’t avant-garde. I love playing funk and blues and plan to make a record in that style soon”-although his 1999 release, Groove Teacher, certainly qualifies as a combo or soul-jazz influenced record. “Working with [organist Richard “Groove” Holmes] was where I learned everything about being a musician and bandleader. He taught me how to work a gig, when to make a statement onstage, and how to get an audience to hear what you’re doing. Even when I’ve done other types of things, I still enjoy getting back to the blues and doing some funk.”

Still, Musillami’s most notable music has occurred in settings with a pronounced experimental or outside tinge. His stylistic flexibility is evident in the fact that he’s recorded in duo, trio, quartet, quintet, sextet and septet settings. Dates with such players as Thomas Chapin, Mario Pavone, Peter Madsen, Art Baron and Schuller spotlight open-ended compositions and fluid arrangements, and Musillami’s writing places equal importance on collective playing, group cohesion and emphatic solos. His guitar work is alternately soothing, aggressive or contemplative.

Given Musillami’s varied résumé, it is impossible to label any single Musillami release as his best. For instance, on Pivot, Musillami, bassist Pavone and drummer Schuller collaborate with trombonist Baron and multi-instrumentalist George Sovak for a set that ranges from the dashing, danceable piece “Bella at Six” to the title track’s unusual arrangement, which lurches from a lean opening to an energized middle passage, then concludes in almost pastoral fashion. By contrast, Mar’s Bars features special guests bassist Ray Drummond and trumpeter Randy Brecker, who join Musillami and saxophonist Thomas Chapin in an eight-song set that includes an entertaining number titled “The Haberdasher Blues” and the humorous but fiery pieces “Cousin Jim,” “Shoeshine” and “Out of Balance.” Chapin and Musillami seem inspired by Brecker’s hot licks and bright solos, while Drummond smoothly integrates his huge bass tones into brisk rhythm section collaborations with drummer Steve Johns and pianist Kent Hewitt.

By contrast, Op-Ed and Motion Poetry are Musillami’s version of band records in the classic jazz sense. Both discs highlight a working quartet with drummer Michael Sarin and pianist Madsen augmented by the coleaders of Musillami and Pavone. Op-Ed is upbeat and energized, with Musillami’s solos hotter, faster and intense than those on Motion Poetry, where his lighter, expressive guitar flights around Pavone’s impressive bass patterns and the piano/drum responses of Madsen and Sarin entice rather than dazzle the listener. But in both cases, Musillami and Pavone’s compositions carefully balance things between establishing and embellishing a group sound, while still providing ample space for individual statements.

There’s another area where Musillami, who moved to the East Coast from California in 1981, doesn’t follow the crowd. Rather than either try to shoehorn his eclectic, unusual music into a restrictive setting for a major label or turn to a foreign company, he issues his music on his Playscape label. “When you’re a label owner, especially one where it’s your own money, you can’t make any mistakes,” he laughs in describing the perils of juggling multiple duties as a producer and label executive. “I’d heard about what happens to labels with distributors, but now that I’m directly involved, I really understand. But with North Country [their distributor] there’s been nothing but honesty, no funny business. That’s important because there’s no margin for error.” That same attitude has always held true for Michael Musillami’s music. It’s honest, frequently surprising and consistently exciting.