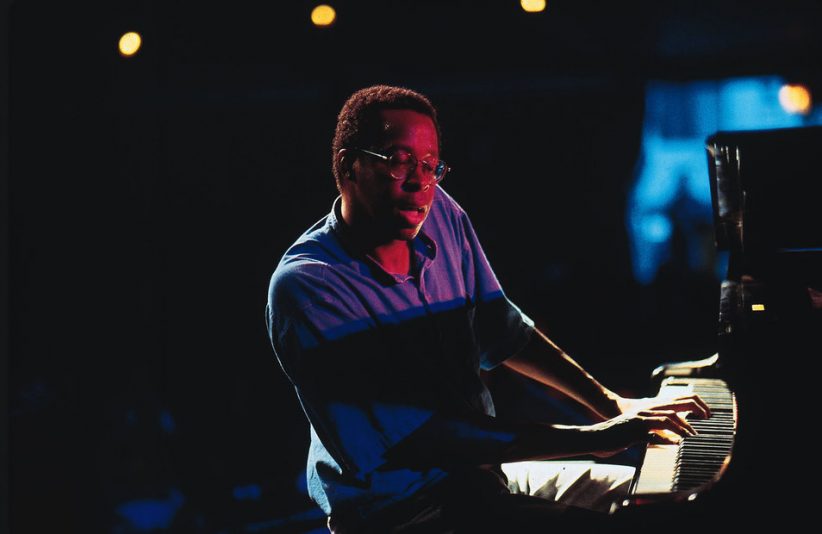 “Millions of choices” is an innocuous phrase.

It doesn’t immediately stand out as a leitmotif of Matthew Shipp’s creative process; it doesn’t even come off as a default riff. Yet, over the course of a conversation with the 38-year-old pianist-composer, it crops up at key points. When Shipp talks about his own artistic development, the phrase tends to de-emphasize the idea that the evolution of a personal language is an exclusionary process, and favors the idea that an artist always starts from scratch, necessarily weighing many of the same options over and over with renewed rigor.

When speaking of his work with, among others, tenor saxophonist David S. Ware, bassist William Parker, guitarist Joe Morris, and violinist Mat Maneri, the phrase underscores the far-ranging variety of approaches they bring to the table, and the unpredictable chemistry of their collaborations.

Eventually, “millions of choices” dovetails with “the complexities of being a jazz musician,” a phrase Shipp uses with a remarkable edgelessness, given that after a dozen years as a denizen of the New York underground, he has emerged as something of an ideological football; within the last 18 months, Shipp has been cover-hyped by Jazziz (“The Gospel According To Matthew”) and notoriously dissed at the New York Jazz Awards by Stanley Crouch. “There’s so much out there to factor into your work, to develop a philosophy from,” Shipp said on the eve of a fall US tour with Ware’s stellar quartet. It soon becomes clear that Shipp’s art and ethos lies in the choosing, that a less than fastidious, inspired approach to research and development reduces the endeavor to something resembling Russian roulette.

Shipp has made a lot of complex choices in developing his music, resulting in several of the more daring recordings of the ’90s. During the course of a performance, Shipp is apt to traverse pummeled clusters, razor-sharp block chord-anchored lines, and translucent impressionistic voicings; like the hovering blocks of color in a Rothko painting, these elements reverberate against one another, at once densely abstract and emotionally primal. Much like the panels of the Rothko Chapel, Shipp’s recordings create a encompassing perspective of the jarring surfaces and the underlying meditative impetus of Shipp’s sensibility. Throughout the ’90s, Shipp’s palette has become increasingly vivid, as he has explored the undertones of drummerless ensembles (’98’s The Multiplication Table [hatOLOGY], which features Parker and Ware quartet colleague Susie Ibarra, is the only date of Shipp’s last five outings to feature a drummer).

Yet, Shipp does not think his most recent hatOLOGY discs, Gravitational Levels, a duo program with Maneri, and his Horn Quartet’s Strata (with Parker, trumpeter Roy Campbell, and saxophonist Daniel Carter, who comprise 3/4 of Other Dimensions In Music, Shipp’s favorite band), “is what is commonly thought of as chamber jazz. It’s jazz without drums,” he contended. “I’m not revisiting the Jimmy Giuffre 3. I’m dealing with rhythms and intensities that are pushed to the side, if dealt with at all” in a sub-genre increasingly bent on becoming concert series subscriber-friendly. Undiluted avant-garde jazz at its most compelling and plastic, both the quiet tensions of his duets with Maneri and the frequently exclamatory exchanges with Parker, Campbell and Carter undergo continuous reshaping without rupture or relaxation (the Horn Quartet disc foreshadows the Shipp-OMID summit meeting to be issued by Aum Fidelity in late spring).

What Shipp is tapping is “the underground language of the ’70s and ’80s, which has become more relevant to people lately, and represents an evolutionary model or mindset.” The recent increased exposure of such purveyors of the underground language as Shipp, Ware, and Parker, is attributable, suggests Shipp, to the music’s ability “to cut through the whole archaeology of motivations, likes and dislikes, social and aesthetic forces, influences, and general psychological factors, that go into listening to jazz. What you hear is the music’s need to live and breathe.”

In a way, Shipp is describing himself. Shipp immersed himself in the jazz piano tradition during his youth in Wilmington, Delaware. Delving into stylists as varied as McCoy Tyner, Paul Bley, and, most importantly, Cecil Taylor, created a vast data bank from which Shipp began to process his personal identity. While still a teenager, Shipp tracked down Dennis Sandole, John Coltrane’s early teacher. After a stint at the New England Conservatory of Music, Shipp landed in New York in the late ’80s, “determined not to be a victim of history. I knew I had to take my music somewhere unexpected,” Shipp reflected, “and I set about putting together the building blocks.

“I wanted a situation like Ellington and Sun Ra, where there is a group of people I can play with on a regular basis and develop an organic music that changes and mutates on its own accord,” Shipp continued. In short order, Shipp found what he was looking for, and became an integral part of what could now be called the Vision School, the musicians who are the backbone of the much-acclaimed New York Vision Festival (for a one-stop survey, check out Aum Fidelity’s Vision Volume One compilation of the ’97 festival). While Ware and Parker have been the most high-profiled of Shipp’s New York colleagues, wind player Rob Brown and drummer Whit Dickey have also been key collaborators; Brown and Shipp’s ability as a duo to generate an invigorating, high-velocity flow of ideas is documented on the ’97 No More disc, Blink Of An Eye.

“Even in David’s quartet, where the compositions are his, and he has a general concept about them, there is a process, an exchange of ideas, that make the generation of material a quartet concept,” said Shipp, who, in detailing the depth of partnership within the Ware quartet, refers to its members as “co-architects. “The quartet is like a fourth dimensional sound object that has this pulse running through its center. The members are in their own vectors, but they know where the center pulse, and out of that center pulse comes all the things that happen between David, Susie, William, and myself.”

Shipp also works with “overt composers” like Roscoe Mitchell, “who often wants very specific things to happen” (Shipp performs on Mitchell’s Note Factory’s Nine To Get Ready, just released in Europe by ECM; also noteworthy is Shipp’s ’96 2.13.61 disc 2-Z, a searing duo encounter with the pioneering saxophonist). “Both Roscoe and David hired me for who I am.,” Shipp explained. “In both groups, I’m doing what I do with music: stack rhythms a certain way, develop a naturalness of line that still has a geometrical quality to it, and lay out a harmonic carpet. The difference between them is that David expects the compositions to be evolved in rehearsal and Roscoe brings pieces to rehearsal that are basically complete.”

What’s far from complete, however, is Shipp’s evolution. Beyond his immediate projects, it’s not easy to predict which way, or ways, he will go. Sample some randomly selected tracks from a pile of Shipp’s CDs, and it’s obvious that Shipp doesn’t stay in one place too long. Explicated in alternately brooding and glistening chords, the harmonic cadences of “Broader Orders” from Thesis , his ’97 hatOLOGY duo program with Morris, fall somewhere between Billy Strayhorn and Alan Hovhaness. On “Before #2,” from the ’96 FMP solo set, Before The World, a pristine arpeggio is elongated into long swirling lines, disrupted by spatter-like clusters. The incessant rhythmic drive and blunt repetitive phrases of “P X” (from By The Laws Of Music a ’96 hat ART String Trio date with Parker and Maneri) borders on the pugilistic. It’s clear Shipp’s music will expand with unpredictable speed in unforeseeable directions.

But, Shipp is certain that his recent successes doesn’t guarantee a smooth ride. “There’s still a lot of preconceptions out there about what this music is about. It’s still difficult to have this music accepted at face value. You still have to wade through a lot of stuff to make things happen. There’s still a lot of this versus that. It’s still a really cruel business, and if you make the wrong choices, you’re dead. This industry is an obstacle course; there’s no room for error. But, there’s a momentum now, there’s a collective energy among the people I play with, and that may be enough to open some up things.”

“I prefer good pianos. I’ve had good and bad pianos of every brand. I like old Steinways and there’s a Yahama I like, but they all have different qualities. It’s hard to generalize.”

Master Drummers Of Bagbon (Rounder): “Heavy spiritual drum music. One of my sources for everything.” The Genius Of Bud Powell (Verve) Duke Ellington: Piano Reflections (Capitol) Joe Morris Quartet: You Be Me (Soul Note) Richard Grossman Trio: Even Your Ears (hatOLOGY) Other Dimensions In Music: Now! (Aum Fidelity)