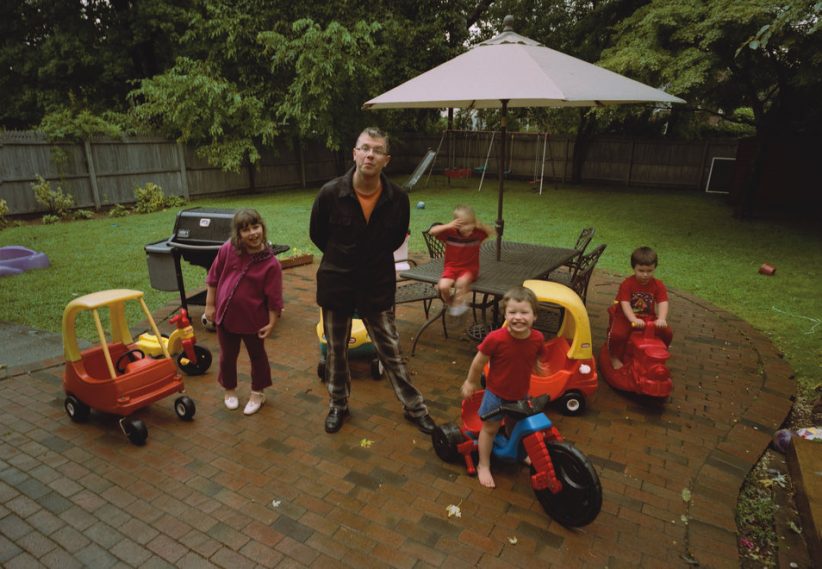 Within 15 minutes of entering drummer Matt Wilson’s home, I was outfitted in a purple shawl and had a tutu on my head. My fashion consultant was six-year-old Audrey Wilson, one of four irrepressible siblings. Henry, Max and Ethan are triplets, age three; Henry and Max are identical. (There are also two cats, Alfred and Daisy.) At one point Audrey struck up the can-can, and Ethan, not to be outdone, responded with his own idiosyncratic version. “I want to approach music with the same innocent playfulness I see in my children,” states Wilson in the liner notes to his new Palmetto release, Wake Up! (To What’s Happening). Playfulness is indeed the rule in the Wilson household. But Matt can crack the whip when he needs to, and one could draw parallels to his music. Underlying all his horseplay, at home and on the bandstand, is a sense of discipline and often a sober expressive intent.

The 40-year-old drummer’s lovely Colonial on Long Island (Baldwin, N.Y.) is a recent acquisition. Prior to moving here in April 2003, Wilson and the family lived in Oceanside, a bit farther from New York City. “I can get to the Jazz Standard [club] from here in 30 to 35 minutes,” Wilson says, digging into spaghetti with homemade marinara sauce. He and Felicia, his wife of 17 years, began their journey in Boston; Wilson did a fondly remembered stint with the Either/Orchestra while Felicia, a violinist, earned her masters at the New England Conservatory (she now teaches orchestra in nearby Long Beach). They resettled in Brooklyn in 1992 but moved to Queens to avoid daily drives on the notorious Belt Parkway. “You’re really tossing the dice whenever you get on that road,” Wilson says.

Raised in Knoxville, Ill., Wilson has scaled the heights of his profession, leading several different bands and doing high-profile sideman work with Buster Williams, Bill Mays, Denny Zeitlin and many others. Wake Up! is the second outing by his Arts & Crafts group with Terell Stafford, Larry Goldings and Dennis Irwin. In 2001 Wilson received a Chamber Music America grant for pieces inspired by the polymath poet Carl Sandburg, conceived for the Matt Wilson Quartet and guitarist/vocalist Dawn Thomson. “[Sandburg] was born in Galesburg, the next town over from Knoxville,” Wilson says. “His first cousin was married to my great-aunt. People talked about Sandburg when we were kids.” A recording is in the cards, but meanwhile, Sandburg has crept into Wilson’s pedagogical method as well. “I started taking his poem ‘Jazz Fantasia’ with me when I would teach college big bands. I would read the poem and have them improvise to the text, to get them out of their collegiate, academic heads.”

Will Wilson’s children take up music? “If they do, they do,” he says. “I have a feeling it’ll be when they’re about 16.” Audrey, in addition to her ballet and Girl Scouting, is taking Suzuki violin. Wilson recalls when he and Audrey had a chance encounter at the airport with Beaver Harris’ daughter. Audrey was astounded to meet another person whose father is a jazz drummer. “It was like they had a club!” Wilson says.

Even now, Wilson’s kids seem keenly aware of the music in their midst, and they love cavorting with dad’s friends. “They came up to [the] Litchfield [Jazz Festival], and they were totally enamored with Steven Bernstein and Tony Malaby playing with Mario Pavone’s band,” Wilson recalls. “They loved Steven right off the bat, and of course Tony, man, you just look at Tony, he’s lovable. So the boys sat there and listened like they were reporters. It’s always great to have them there. Hopefully they’ll know that they’ve met these people and they’ll say, ‘Yeah, he used to come over to my house.'”

“We just went to Tulsa to visit Felicia’s folks. We usually go there or to Illinois every year. Tulsa’s great-we get to eat some great Mexican food and see a bunch of relatives. Both places give Audrey much more of a sense of family than she gets here. We’ll go other places too, as the boys get older.”

“We have two Ford Windstar vans. It’s the ultimate in hipster jazzmobile. We wanted two vehicles that could carry the family. And musicians-as a bandleader it’s nice to take your own car and not have to rent. The boys are so into cars! They can identify probably 40 different kinds.

“We have a Hewlett-Packard PC, and I have a Compaq laptop that I carry with me. I think we’re going back to Mac, though. [For software] I use Cakewalk, to hear stuff back and print out parts. But I try to make the parts look more human.”

“Three kinds: creative studies books, trash novels and classics. I just reread One Hundred Years of Solitude, also The Great Gatsby. But I also like those Patricia Cornwell books. I love Anne Lamott, who wrote Bird by Bird, Operating Instructions and Traveling Mercies. I also try to read every Paul Auster book. I used to see him in Park Slope [Brooklyn]. I loved The New York Trilogy and The Music of Chance. Norman Mailer’s book on writing, The Spooky Art, I learned so much from that. There’s a great Stephen King book on writing too [called On Writing]. Audrey read Green Eggs & Ham to me the other day.”

“I think Mike Myers is a genius. He was on Inside the Actors Studio, and it was probably the most I’ve learned about improvisation in years.