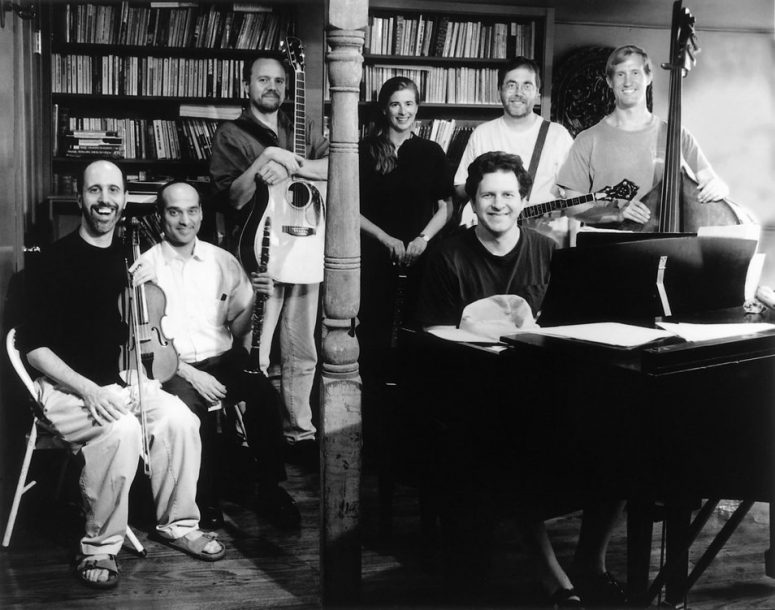 Violinist Matt Glaser tells a Groucho Marx joke one minute and quotes mystic Sufi poet Rumi the next. He’s a dedicated jazz educator and musician, who believes music is capable of expressing every shade of human experience. As the chairman of the string department of Berklee for the last 20 years, Glaser tries to break down musical barriers with the zeal of a missionary every chance he gets. His new album, Shifting Sands of Time (Rounder), with the Wayfaring Strangers, does just that, organically bringing together bluegrass, jazz and klezmer with a surprising combination of musicians and material.

As an educator, Glaser often lectures on seemingly disparate connections between jazz luminaries and visual and literary artists such as Lester Young/Paul Klee/Emily Dickinson or Sonny Rollins/Jackson Pollack/Walt Whitman, exploring similar bents across artistic styles. Glaser is interested in grand themes, something he shares with his friend, film director Ken Burns.

“Jazz by Ken Burns is horribly flawed and great and beautiful at the same time,” says Glaser, who is a featured talking head in the film. During the making of Jazz, Glaser suggested, to no avail, that Burns include 50 additional musicians such as Chick Corea, Cannonball Adderley, Stan Getz, Albert Ayler, Pat Metheny and Freddie Hubbard. “We discussed it, but Ken wanted a narrative thrust telling a few stories. It was not meant to be inclusive, but as an introduction for 37 million Americans to jazz. I’m proud it doubled jazz record sales,” Glaser says, in spite of residual frustration.

As a violinist, Glaser has performed at Carnegie Hall, the Boston Museum of Fine Arts and the White House, but he is most comfortable playing swing tunes with an existential viewpoint. In “Funeral in My Brain” from Shifting Sands of Time, for example, Glaser has combined three dour Emily Dickinson poems-feeling they are playful-and married them to an Appalachian melody with extended jazz harmony on the A section and bluegrass on the bridge.

Showcasing top musicianship, the Wayfaring Strangers includes mandolinist/clarinetist Andy Statman, banjoist Tony Trischka, pianist Bruce Barth, guitarist John McGann, bassist Jim Whitney and vocalist Jennifer Kimball, as well as guest appearances by bluegrass giant Ralph Stanley and many others. While each musician brings a different genre into the mix, the resultant sound is Glaser’s idea of a slow, introspective music with bluegrass and Appalachian tunes as the basis for improvisation rather than Tin Pan Alley songs. The appealing album is a tapestry woven from many vibrant colors.

The idea for the recording came out of a personal tragedy. When Glaser was diagnosed in 1997 with a serious form of skin cancer (that was successfully treated), he thought not only about death, but about what he wanted to listen to on his deathbed (leaning toward the spiritual clarinet wailings of his bandmate Statman). This motivated him to form a new group and, as he healed, the Wayfaring Strangers were born.

“Music for the ultimate situation is no longer so abstract. Music has to increase its power to heal; it’s needed now,” says Glaser. He’s drawn to the chanting of the Koran and the Vedas as well as Bach and the traditional “The Wayfaring Stranger.” At home in Cambridge, Mass., he’s listening to Marty Ehrlich’s Soujourn (Tzadik), George Jones’ Cold Hard Truth (Elektra/Asylum) and Joe Lovano’s Trio Fascination (Blue Note). This mix is par for the course for someone who grew up with an opera singer mother (who’s recently enjoying hip-hop) and listened to his father’s extensive jazz collection, and later studied ethnomusicology.

Glaser is a passionate educator. He’s written four books, including Jazz Violin (Oak) with Stephane Grappelli and Jazz Chord Studies for Violin (Berklee Press) with Joe Viola. But he’s more drawn to ideas rather than information. “I don’t have an anti-fact approach, but there are other ways of grasping things-metaphors, analogies and intuition. Ideas can be transformative and toxic.” Paraphrasing Theodore Roszak’s book Cult of Information (University of California Press), Glaser says we live in a world saturated with information, but not ideas. He’s fond of speaking about Louis Armstrong in the same breath as Albert Einstein and quick to find common ground and parallels between artists, eschewing divisiveness, especially in the jazz world. “In light of recent events [just after the terrorist attacks on America] all jazz musicians should feel connected to each other, rather than divided,” he pleads.

Asked about future plans and dreams, there is no mention of new albums or gigs. Instead he speaks about practicing, learning and growing as a musician. His mission is to glorify musicians of all sorts.

“Music is not about facts; it’s about life, death, human transcendence and beauty.”