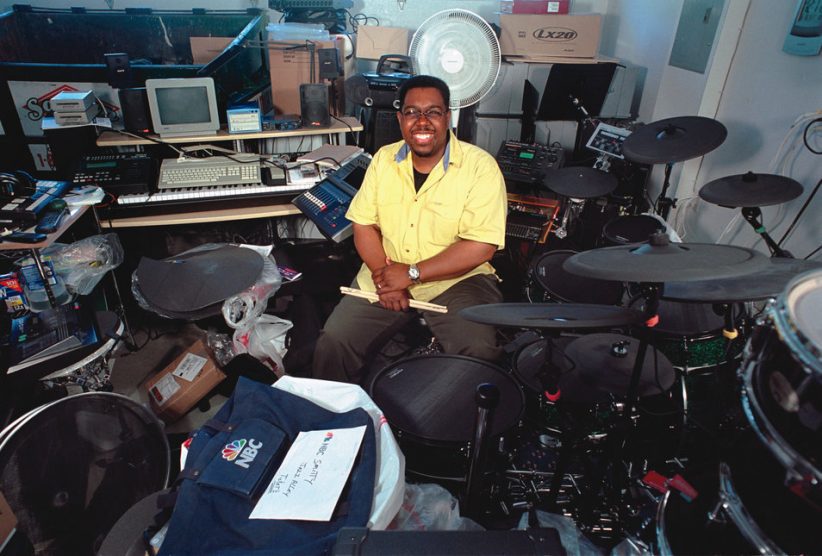 Oh, Lord-that’s his favorite chair,” Kim Smith laughs. “Ooooh, you’ll never get him up from there.”

Marvin “Smitty” Smith affirms his wife of three years’ claim that he can lounge in the oversized leather chair for hours watching shows on his 32-inch Sony monitor. For big sporting events, however, such as fights and playoffs, the Tonight Show With Jay Leno drummer since 1995 has buddies over for viewing on his 100-inch projection TV. However, his wife’s cooking is the real reason they all flock to his Northridge Hills, Calif., 4,000-square-foot, two-story megapad that’s part of a securely gated development. “‘Is Kim going to cook her wings?'” chuckles Smith. “That’s the first thing they ask when I invite them over. She can bake, too, and cooked a pecan pie for one of my buddies. He couldn’t wait to get it home and was eating it in his car,” the drummer says, busting up.

Chicken is Smitty’s favorite food, too. “Fried and barbecued-oh man, I love some good chicken. I’m kind of partial to this place in Burbank, Ribs U.S.A.-their chicken is good, and their wings are definitely on. I like fish, too, and they do good catfish. Trout is also great, and Chilean sea bass is my favorite. Kim is a great cook and makes everything from scratch, including bread. She even makes ice cream and does this almond tea flavor that’s out of sight. I don’t cook myself, but made an agreement with Kim that I clean up afterward.”

Before moving to California, the Waukegan, Ill.-native Smith lived in New York for 15 years. While in the Apple he worked with Jon Hendricks, Bobby Watson, Slide Hampton, Archie Shepp and many others including Kevin Eubanks, the current Tonight Show bandleader. When the Leno show offer came up, Smith wondered if could adjust to a different way of living. “Guys that had been out here before, such as Gary Bartz and Steve Turre, who grew up in the Bay Area, warned me. They said, ‘It’s not the same, and you’re not going to get the same kind of energy that you got in New York.

“Then I came out here and realized that you have to generate the energy yourself. I hadn’t done that in a long time, because when you step out of your door in New York all the stimuli is there. So that’s been my challenge, to maintain the same verve and intensity here.”

A few years later, Smith started relaxing some, and he began to savor his great situation. Studio project and sideman gigs with Vanessa Rubin, Steve Turre, Carla Cook, Cedar Walton and Billy Childs also eased his restlessness. Composer-arranger-pianist Childs was a big influence on Smith, and as a result the drummer began collecting recording equipment and instruments to begin working on his composing and arranging skills. Two thirds of Smith’s three-car garage is overrun with gear, including a Yamaha workstation and a Pintech electronic drum set, which he endorses. Before Smith can seriously compose, however, he’ll need to get things organized, similar to his wife’s third of the garage, which houses some of her gift-basket-business supplies. Kim urges Marvin to be creative and noncomplacent and to toss any unnecessary gear. He shrugs and relates that it is hard for him to part with stuff.

About a year ago the Smiths cohabited a townhouse in Sherman Oaks that was a third of the size of their present home but much closer to NBC’s Burbank studios. Kim has a large family, wants kids and is very social, so the larger home is more convenient for entertaining. And the abundance of space, the sweeping view of Los Angeles’ San Fernando Valley and close proximity to his wife’s shop greatly outweighs Smith’s additional commuting.

He sums things up by saying, “I like where my life is right now. So I’m trying to build on it, so I can maintain it.”

“I like mystery shows like Matlock, Diagnosis Murder, Law & Order, CSI and The Wire, which one of my buddies, Wendell Pierce, is on.

“I read the book about Billy Strayhorn [David Hajdu’s Lush Life] and found that pretty interesting. Kevin Eubanks told me about the book [by Daniel Mark Epstein] on Nat ‘King’ Cole and that it was killer. But mostly I read about black consciousness, social science and society. I have a couple of Tony Brown’s books.”

“I like green, blue and a good black. Basically, something that looks good and can fit me these days. I prefer things that are loose and baggy, such as Dockers and khaki slacks.”

“I like watching football and basketball but don’t have a team I root for. I just like a good game or competition, such as boxing. I’ve been trying to get back into baseball, but the last strike left me cold toward it. I wasn’t ever good at any sports, so I don’t play them. I have been trying to get more into shape and walk with Kim in the morning or evening-it’s too hot in the San Fernando Valley during the day. Also, I’m thinking about trying yoga.”

“I don’t go on them that much, because we only get a week off, about every 10 weeks. But last year in August, for two weeks, we went to New Zealand and Australia, and that was incredible. Kim always wants to do trips to Palm Springs, San Diego and Santa Barbara.

“I have a Mac, and Kim uses a PC. I pay my bills and do e-mail with it. Kim sends pictures and has a Web site for her business, and she’s trying to get me into having one.”

“I drive a 1999 Toyota Camry, but I used to drive a Ford Windstar minivan and gave that up so my wife could have her Expedition.”