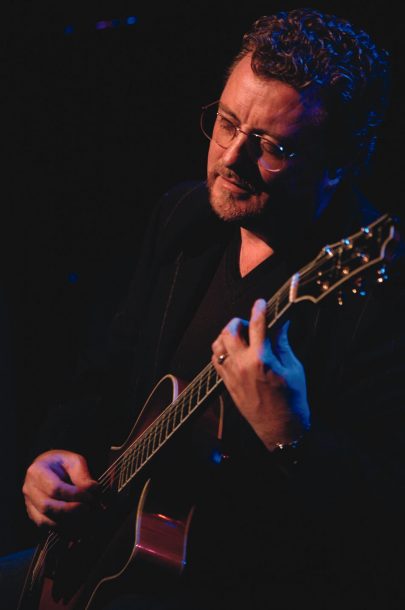 Britain’s Martin Taylor holds a lofty spot in the ranks of international acoustic guitarists of note, bringing to his work clarity and technical finesse as well as a bright-minded stylistic range, connecting the dots between folk, pop and jazz. His musicianship is immediate and appealing. Where he fits in the category-hungry musical universe is another, fuzzier matter-and one not made any clearer by The Valley.

It starts out in crisp, sonorous postfolk mode and takes several forks along the song path, including a stop at the Norah Jones hit, “Don’t Know Why.” Vocal cameos by noted operatic bass-baritone Bryn Terfel on “Bridge Over Troubled Water” and “God Bless the Child” are too straight for comfort, a common problem when opera singers tackle pop fare-and especially given the relaxed accompaniment of Taylor’s guitar versus the standard piano backing. The late French pop singer Sacha Distel takes on “I’ve Got You Under My Skin,” erring on the side of pop suavity rather than jazz swagger.

On the other hand, Taylor brings a new and nimble solo jazz guitar approach to the standards “Bewitched, Bothered and Bewildered” and “Have You Met Miss Jones?” He ends the set with a lovely African-flavored original, “Kwame,” with percolating muted strings mimicking an mbira or two.

Do they really mean the best of Martin Taylor on this new compilation? Occasionally, the tracks here seem to represent the worst of the preternaturally talented guitarist. Of course, it depends on your perspective: for those of us with a low (to zero) tolerance for the antijazz vapidity of smooth jazz, too much of this music-at least on the first disc-is pure dreck. The bad stuff seems all the worse because Taylor is such a gifted player, but one who has apparently sometimes been lured to the dark side by the carrot of smooth dollars.

All is not lost, but smooth-phobic listeners will need to judiciously program their CD players to edit out the musical Cheez Whiz. “Hymne a L’Amour” is a fetchingly fluid and gracefully melodic piece adorned with spare strings, and his solo pieces “True” and “Tennessee Waltz” are rife with musicality and delicately-wielded chops. Taylor and Yes-man Steve Howe have an overdub fest on the multiguitar “La Questa.” He also gets to sink sweetly and hotly into his role as a faux Django alongside his former employer Stephane Grapelli on “Undecided” and on a bossa-colored take on the immortal Reinhardt jewel “Nuages.” He even clenches a funky-modal stylistic fist on the tough, loveable “The Kraken.”

Taylor is also a gifted artist in the rare art of solo jazz guitar, as heard on moving renditions of “I’m Old Fashioned,” “My Romance” and a wizardly “I Got Rhythm,” with a thumb that won’t quit or take simple roots-and-fifths for an answer.