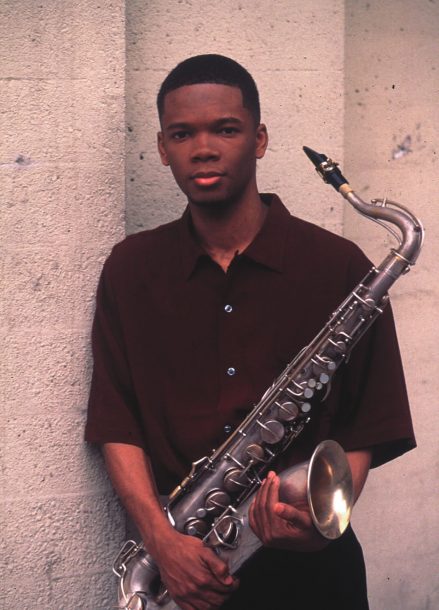 Webster’s Dictionary defines a shim as “a piece of thin material used to fill in space between things.” Which is not to imply that tenor saxophonist Mark Shim’s material is thin, nor that he falls somewhere “in between” stylistically. On his debut, Mind Over Matter (Blue Note), Shim displays a smooth, classic tone as well as a talent for writing functional, idiomatic jazz compositions.

Shim was born 23 years ago in Kingston, Jamaica, and grew up mostly in Richmond, VA. He started playing alto sax in the seventh grade, switching to tenor three years later. Originally hooked on jazz via Charlie Parker records, he fell under Sonny Rollins’ sway in high school. The Rollins influence still lives at the core of Shim’s sound, though in recent years, he has turned more toward Joe Henderson, and for ballads, Coltrane.

Shim was a music major at Virginia Commonwealth University for two years before transferring in 1993 to the jazz program at William Paterson College in Paterson, NJ. Drawn to New York as if by gravity, he left Paterson after a year, moving to Brooklyn. At a jam session, he met baritone saxophonist Hamiet Bluiett, with whom he recorded in 1995. He worked with David Murray’s big band, and with Betty Carter, as the lone horn in her touring unit. For the past two years he has played alongside another gifted young tenor man, Seamus Blake, in the critically and popularly acclaimed Mingus Big Band.

Future goals? “Ideally, I’d like to have a large repertoire of compositions that have my own individual sound,” he says. “I just want to be an individual, who does something to advance the music forward. I want to do something different and try to add something to the music that, hopefully, hasn’t been heard before.”

Shim is well on the way to finding his niche.