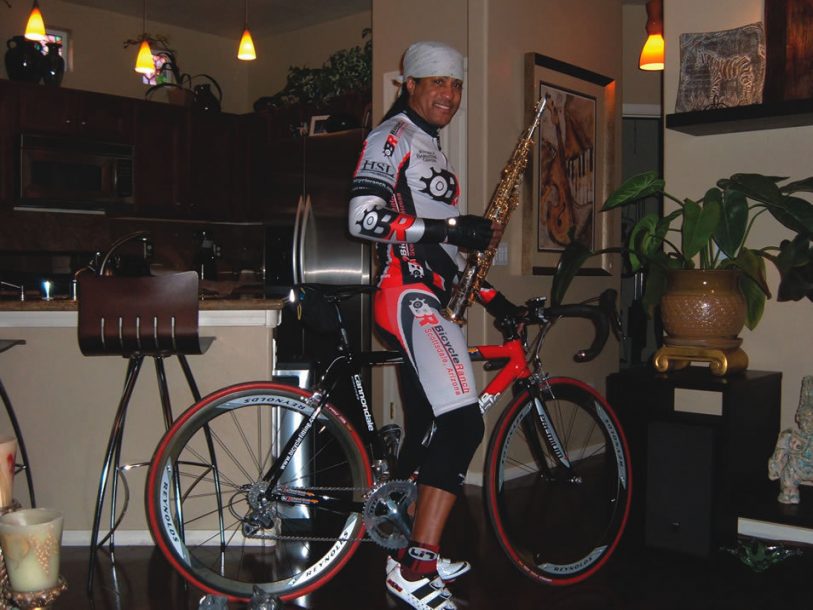 It’s true that musicians aren’t exactly famous for their physical prowess-thankfully, you can make great music without spending hours at the gym. But saxophonist Marion Meadows doesn’t follow convention. The Heads Up recording artist has nine albums, including the just-released Dressed to Chill. He spends most of his free time outdoors-especially road racing-and has interests spanning from graphic design to wine.

A Connecticut native, Meadows makes his home in the foothills of Phoenix, where he and his wife reside in a residential community with a European design. Though his Italian-style multilevel stucco house doesn’t have a yard, Meadows doesn’t seem to mind the ubiquitous rock garden that surrounds his house.

The interior of Meadows’ house is a conglomeration of styles. While most of the house is contemporary and eclectic, the first thing that greets a visitor is a wall of masks-African, Native American, Brazilian and others-on reed-patterned wallpaper in a room with a leopard skin rug. “It’s pretty wild,” Meadows says of the room, which serves as his office. “It’s pretty much like a little jungle in there. The first impression of the house is, Whoa!” he laughs.

Meadows works on music and art in his office. “It’s where I’m very creative,” he says. “I do a lot of my artwork there-I’m very much into [Adobe] Photoshop and I have a studio down in that office for recording tracks for myself. I don’t do other people there, just me. It’s pretty obvious that I spend a lot of time down there. My wife is always going, ‘Uh, are you going to come up out of there anytime?'” he laughs.

While admittedly not a professional graphic designer, Meadows is pretty savvy when it comes to using Photoshop and other design tools. “I’ve designed some artwork for some friends. Now that they know I can do it, they call me up and say, can you design my brochure, my flier, that stuff. I’ve found Photoshop to be a very handy hobby tool, which I actually can use when I need it,” he explains.

In recent months, Meadows has been spending much of his time working on Dressed to Chill, which hit stores May 23. He says it’s always hard to compare his releases because he’s “always been eclectic,” but his latest album does have some noticeable differences from its predecessors. “I actually played bass clarinet on one of the tunes,” he says.

“I hadn’t really written, for a long, long time, a beautiful romantic ballad and I did this year,” he adds. It’s a song called “Scent of a Woman.”

Meadows continues, “I also got a new member of my band, who’s actually singing on the record this time, by the name of Will Brock. I’ve never had a guy who actually works with my band full time singing on one of my records.”

Perhaps one of the most unexpected dimensions of Dressed to Chill is Meadows’ cover of R. Kelly’s “I Believe I Can Fly.” Meadow says, “This is a song that I always wanted to record, from the time I heard it. I got called to do a recorded version of this song and I said, you know, I could do this so much better if we were doing it for my own record, because I was doing it for somebody else. So I went into the studio and redid it and it came out so incredible I just had to put it on the record. It was amazing, and I don’t do many covers.”

It should come as no surprise, given his profession, that music plays an important role in Meadows’ pad. “We play a lot of music at home, maybe more so than other people. We’re not overboard, because there’s a lot of other things that we like to do, too, but when you come to watch a movie at my house, we’re wired up for sound, trust me,” he laughs. “The house rumbles when we’re watching a movie.” And his favorite movie? “My favorite movie of all time is the Shawshank Redemption, though recently we’ve been watching Crash.”

Despite the amount of time Meadows puts into his music, he still has time for road racing. “I compete on a racing team – I’m a Lance Armstrong-style rider. I’ve been doing that for a long time,” he says.

“I’ve always been an endurance athlete, and over the last few years, I’ve started racing heavily on a team,” he explains. “I got real serious about it over the last 15 years, but it’s just something I have passion for. I do it on a daily basis and I try to get in as much training as I can. Typically during the race season, I’m on my bike 250 to 300 miles week.”

“I’m reading the Quincy Jones biography [Q: The Autobiography of Quincy Jones] right now, and I want to read The Da Vinci Code before the movie comes out. I’ve got it in my house, but I haven’t read it yet. As soon as I finish Quincy, I’ll jump on that.”

“I don’t eat any red meat, and haven’t for many years. My diet is very salad-oriented, fish dishes, Italian pastas…we try out new recipes once a week.”

“We like good wine. Although we don’t have a wine cellar, we keep a good stock. We’re mostly white-wine drinkers, but we keep some merlots and shirazes on hand. We’re real good friends with [the purveyors of] a champagne called ‘Almond Champagne’ that’s from Wilson Creek Winery. This stuff is fantastic…have it as a mimosa. Oh my gosh, you’ll be ordering it all the time. We order a case of that every Christmas.”