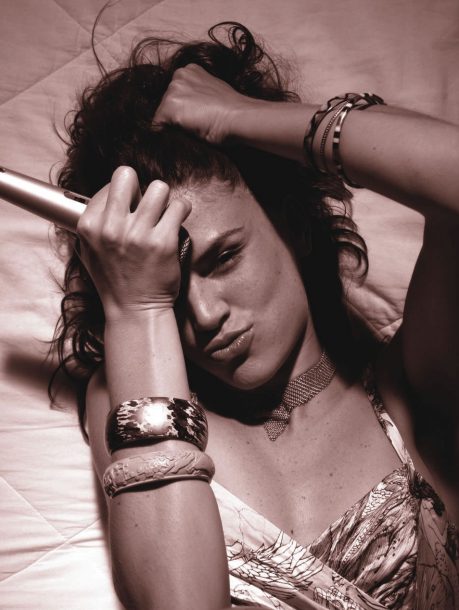 At age 26, São Paulo-born Mariana Aydar is at a crossroads, one from which the views of the road behind and the one ahead are equally clear. Her father, producer and instrumentalist Mario Manga, a founding member of the avant-garde ensemble Premê, paved Aydar’s entree into the world of bold experimentation. Since making her professional debut at 20, Aydar has worked alongside several of the most dynamic players of her generation, rambled around Paris for a while, and discovered there was as much worth in the deep-rooted (specifically, classic samba rhythms) as the innovative.

Now, with the release of Kavita 1, she has established a dynamic place where tradition intersects the cutting edge. It’s anybody’s guess as to why Aydar chose a Sanskrit word (which means “poet”) for the title of an album sung entirely in Portuguese, particularly since Aydar’s own poetic leanings (her lyrics have garnered widespread esteem) are here evident only once, on the exuberant “Festança.” Throughout, the established (durable pop standards like “Candomble” and “Menino das Laranjas”) is set wildly ablaze (did I mention that Kavita 1 features more than three dozen musicians and singers?), while the new (the sweetly bracing “Vento No Canavial,” the delightfully sensual “Deixa o Verão,” the sweet, dainty “Prainha”) is lined with reverence for what has come before. So a better title might have been borrowed from the lead track, the fog-bound samba “Minha Missao” (which translates as “my mission”), for Aydar seems both determined and singularly able to carve a fresh path through Brazil’s lush musical landscape.