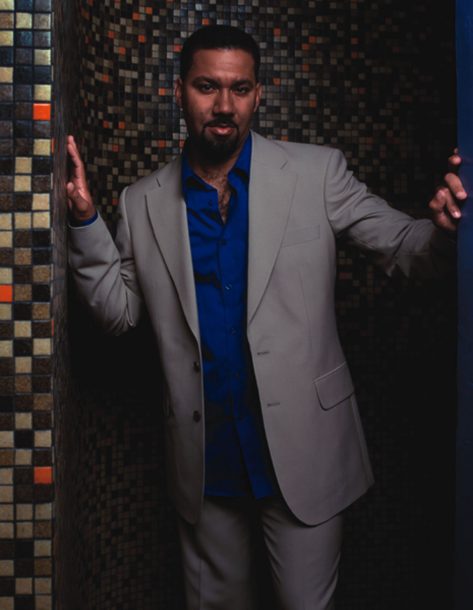 In a way, Marcus Johnson’s In Person: Live @ Blues Alley, may become a historical recording, because if the Washington, D.C.-based keyboardist gets any busier, such live shows might become increasingly scarce. In addition to his recording career, Johnson heads up an entertainment company, Marimelj, and a record label, Three Keys, whose roster includes popular smooth-jazz saxophonists Jaared and Michael Lington and veteran keyboardist Bobby Lyle, one of Johnson’s personal idols.

Johnson decided on a music career as a teenager, and his career path has been marked by his entrepreneurial spirit and willingness to work hard to achieve his goals. Johnson received dual graduate degrees in law and business from Georgetown University in 1997, and as a graduate student, he recorded and sold his own CDs independently to help pay for his education. He took an unpaid internship at MCA Records, recalling, “I washed cars from April until June until I made enough money to be able to afford to go and stay with my aunt, not get paid, and rent a car on my own in order to go and work for the senior VP of business and legal affairs, which is their legal counsel. Out of that experience I got so much that I use even today.” Johnson founded Marimelj while in law school, and in 2001 earned the Young Entrepreneur of the Year Award from the U.S. Small Business Administration. Last year, billionaire and Black Entertainment Television founder Robert Johnson became an investor in the company.

On In Person: Live @ Blues Alley, which was recorded over two nights last August at the D.C. jazz club Johnson and his splendid ensemble, which prominently features Jaared, enthrall an enthusiastic audience with their soulful blend of jazz, R&B and funk, all highlighted by Johnson’s elegant piano stylings. The CD and a forthcoming live DVD, as well as recently released albums by Lington, Lyle and Jaared, and an upcoming album by a young saxophonist named Jackiem Joyner, are only a few of the projects keeping Johnson busy these days. Three Keys will soon expand into the urban-music realm with imminent new releases by YahZarah, a featured vocalist on In Person: Live @ Blues Alley, and singer Jarrard Anthony. As Three Keys continues to grow, Johnson might have to cut back on the amount of touring he does. “It’s good money, it’s fun,” he says. “However, I do have to make sure that the ship is running.”