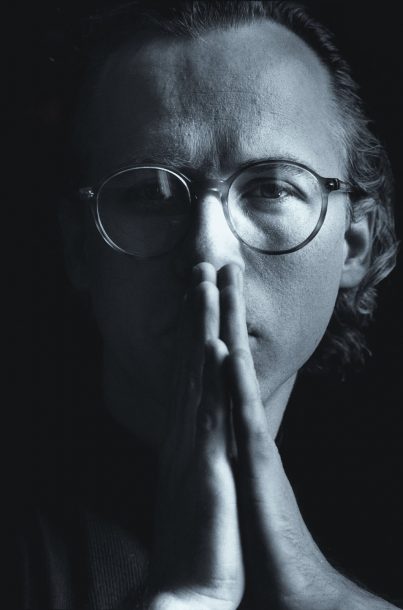 Marc Johnson has this thing for guitar. One of the preeminent jazz bassists of the past two decades-acclaimed for his intimate, interactive work with the last Bill Evans trio (1978-1980)-Johnson has had an affinity for guitar since his formative years. “When I was a kid, before I knew I was going to become a musician, I listened to the Beatles, Bob Dylan, the Allman Brothers and Jimi Hendrix. So I guess the guitar was a presence early on. Even now when I sit down at the piano, my writing tends to lay well on the guitar.”

Johnson championed the guitar with his 1985 ECM release Bass Desires, an all-star quartet which featured Peter Erskine on drums and a two-guitar frontline of Bill Frisell and John Scofield. He repeated that formula in 1987 with Second Sight, which also successfully blended the pop and rock influences of his youth with jazzy improvisations and harmonies. Now 11 years later, following two daring projects with a guitar-bass-percussion unit called Right Brain Patrol, Johnson returns to the two-guitar format with The Sound Of Summer Running.

A six-string summit featuring Frisell in tandem with Pat Metheny and Joey Baron on drums, Johnson’s Verve debut is bound to send ripples of excitement through the guitar community. “Put Frisell with just about anybody and you’re going to create something exciting,” says Johnson, alluding to the guitarist’s wildly diverse list of collaborators ranging from John Zorn and Julius Hemphill to Paul Motian, Elvis Costello, Jan Garbarek, Vernon Reid and Nashville dobro ace Jerry Douglas. “But to have Pat and Bill together for the first time is really a special meeting. And they hooked up almost immediately.”

Indeed, the two most original guitarists of the past two decades share a common ground in their mutual love of pastoral, so-called heartland melodies-Frisell on Have A Little Faith, Before We Were Born and his last two Nonesuch releases, Nashville and Gone and Just Like A Train; Metheny on just about everything he has recorded as a leader since 1975 but especially last year’s Verve duet with Charlie Haden, Beyond The Missouri Sky.

“When I was trying to come up with an idea for a focus for the record it was a little difficult because they both can play in so many different musical worlds,” Johnson explains. “I didn’t want to do a record that showcased all those possibilities, I wanted to do a more focused record drawing on more of the folk kind of elements from both of their histories.”

Johnson had actually gotten the ball rolling over two years ago when he was still signed with JMT Records. The German label folded just a few weeks after they agreed to do Marc’s next guitar tandem project, putting him in a position of having to scramble for a record deal. Of course, with names like Metheny and Frisell attached to the project, he didn’t have to scramble too hard.

Johnson wrote six compositions specifically with the two guitarists and their individual qualities in mind. “They have distinctive characteristics to their sound that are immediately identifiable,” he says. “Pat has a very strong melodic sense when he improvises and he interprets a melody so well. And Frisell, too, has his own melodic thing. You don’t think of him as a real linear player when he’s soloing. He’s got sort of these Monkish ideas but he also has continuity that’s strangely his own. And each one of them somehow got to the essence of each tune and helped make each one have a strong identity.”

He also has high praise for drummer Baron, with whom he has recorded in pianist Enrico Peranunzi’s trio. “Joey’s timing thing…I just feel very close to. He swings his ass off, his beat always has a strong identity and he doesn’t do anything that’s out of the boundaries of good taste. In fact, all the players play with such exceptional good taste. Plus, they really play for the other musicians. Everyone sort of gave it up for the continuity of the whole. I was really pleased with that aspect of how everyone was such a team player for this project.”

Johnson’s opener, “Faith In You,” establishes an instant rapport between the two guitarists as they cavort playfully with close harmony lines. Frisell’s crisp solid body tone shimmers with a metallic aura and lays particularly well alongside Pat’s warmer hollowbody tone. This kind of uplifting heartland stuff bears Metheny’s unmistakable stamp, particularly when the guitarist launches into a solo which is quintessentially Pat-melodically surging and unapologetically effervescent, full of those signature glisses and chromatic runs that have marked his playing since his 1975 debut, Bright Size Life. Frisell complements that flowing quality with something a bit more staccato and fragmented…typically Frisellian.

“Union Pacific” is an unrelenting blues shuffle with some of Metheny’s bluesiest playing on record. “I really wanted to get down and play something like that,” says Johnson. “Just to be able to play a shuffle with Joey is so authentic and real. And I don’t think I could’ve done those kinds of tunes with the Right Brain Patrol. The rhythmic impetus is so very different in that band. Arto (Tuncboyacian) is a great percussionist but he doesn’t really live in that jazz world the way Joey does.”

Johnson’s title track utilizes Metheny’s signature power strumming, another heartland quality that harkens back to New Chautauqua and American Garage. Two pieces, the gentle gospel-flavored waltz “Porch Swing” and the loopy, early ’60s Ventures-styled backbeat number “Dingy-Dong Day,” were both composed on bass away from the piano. Only two pieces, “With My Boots On” and the jazzy ballad “For A Thousand Years,” feature extended bass solos by Johnson. “I was conscious in this project especially of not wanting to use the date as a vehicle for my own soloing,” he says. “Since I was bringing a majority of the compositions to the session I felt like my creative energies were well satisfied in providing the vehicles for those guys to improvise in. Really, the record is as much about them and how they play together as it is about anything. And I knew it would be.”

Since his fabled tenure with Bill Evans, Johnson has been striving to expand the boundaries of what he plays. His recent work with the Argentine bandoneon master Dino Saluzzi (documented on Cite de la Music, ECM) and with Brazilian pianist-vocalist Eliane Elias (The Three Americas, Blue Note) as well as his own recent projects as a leader, fall somewhat outside the strict confines of straightahead jazz. He’s stretching idiomatically as if restless, not wanting to be confined to one specific genre. “I am looking for different contexts to improvise in that are still somehow personal and meaningful to myself and to other people,” he says. “I don’t want to necessarily label it but, to me, if it’s improvised music, it’s jazz.”

Back at the University of North Texas State, Johnson’s vision was not so open-minded. “I only ever wanted to play with Bill Evans,” he recalls. “It’s a fantasy you have as a young bass player. If you wanted to play in a trio context, that was the gig to get.”

Before landing that dream gig, he would put in ten months of roadwork with Woody Herman’s Thundering Herd. “Had I not had that experience I wouldn’t have been ready for the Bill Evans trio,” he maintains. “The level of professionalism and concentration that Woody’s gig demanded was a lot higher than what I was used to playing around Dallas. That prepared me physically and mentally for the trio gig.”

On a sweep through New York with Herman’s band in the Spring of 1978, he hooked up an audition with Evans, who hired Johnson to replace Eddie Gomez in the trio. An excellent document of Johnson’s integral role in the Evans trio was last year’s Warner Bros. six-CD boxed set, Turn Out The Stars.

Following in the footsteps of such renowned artists as Chuck Israels, Gary Peacock, Eddie Gomez and Scott LaFaro might have shaken other upcoming bassists, but Johnson was too immersed in the art of listening and reacting on the bandstand to be intimidated. “Had I given it much thought I probably would’ve been very intimidated. And actually at times I was scared to screw up. But somehow I was never afraid to take risks and I probably went for things on the bandstand that I couldn’t play in an effort to get it out on the instrument. I was naive enough, I suppose, not to consider too much about where I was or what I was doing. Plus, I had the support of two great musicians in Joe LaBarbera and Bill Evans. You’d think that getting in the ring, so to speak, with some heavyweights like that would be difficult and frightening. And I suppose if their intention was to blow you off the bandstand, it could be a frightening experience. But in most cases, cats want to buoy you up and help you. And that’s exactly what happened for me in that situation. Bill and Joe were both so wonderfully supportive that if I had a moment of self-doubt they were there to give me positive feedback.”

Johnson came away from that gig with a newfound sense of confidence in his own ability to take risks. “What I am enjoying now as I’ve gotten older is more confidence in what I can do and the intelligence or wisdom to play a little more within myself,” he says. “And even if I take a risk I’m a little more assured that I’m going to be able to get out of it if I make a mistake or I’m going to be able to pull it off. So yeah, I’m getting more confident now.”