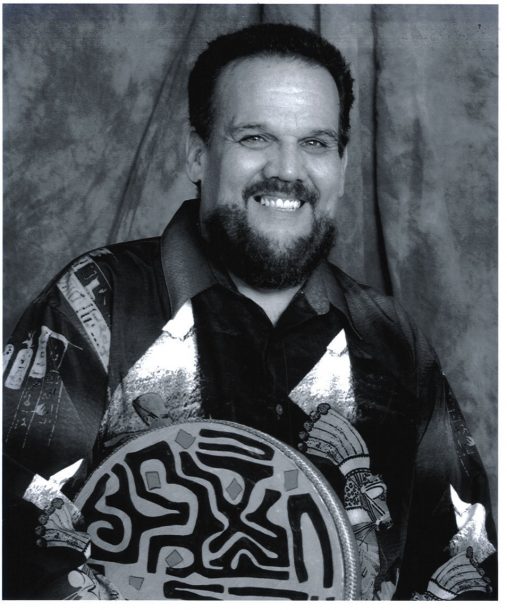 The first time percussionist Manolo Badrena ever set foot into a recording studio he played on one of the top-selling jazz albums of all time. He had just auditioned for the fusion group Weather Report when keyboardist Joe Zawinul asked him to come the studio to work on their next LP. The album they were about to record, Heavy Weather, would soon become both an artistic and commercial success. It would sell so many copies that it would propel the group into rock-sized arenas and change the sound of jazz.

Listen closely to the tune “Birdland,” and check out the rapid-fire tambourine work that pushes the song for its full six minutes. Badrena did that in one take-not because he had to; he didn’t know any better. “That was my very first time in a recording studio,” he laughs. “I didn’t know you could stop!” He says he was too young and naive to be scared, but then reality slowly settled in. “After I was in the studio with these jazz giants for a little while, I started to worry. But I told myself not to get overwhelmed and just do what I always do-just groove.”

That ability to “just groove” has taken Manolo Badrena on a prolific rhythmic journey. It started when he was a child steeped in the rhythms of his native Puerto Rico, then led to his tenure with Weather Report, then to a world of studios and world tours as an in-demand sideman. Badrena studied formally at a conservatory in San Juan, and as a teen, he felt the beat of both the Caribbean and U.S. “I played in a rock band as a teenager,” he says. “We opened for the Byrds once in San Juan. My generation of Puerto Ricans heard both kinds of music. Ever since I was kid, I’ve always wanted to mix Latin with other forms of music. I’m like a sponge. I hear and take in everything. Some musicians don’t hear anything other than the kind of music they play. But I love all kinds of music.”

As if to prove his point, he recounts the kinds of music he heard as a youngster. “There was always a strong association with the U.S.” he explains. “Concert promoters would bring acts like James Brown, then match them with Puerto Rican musicians like [legendary band leader] Cortijo.” Badrena’s mother was a dancer who loved jazz, so he heard Gene Krupa, Louie Bellson and Max Roach around the house.

Lately Badrena has spent much of his time in the acoustic group Trio Mundo, which just released its second CD, Trio Mundo Rides Again (ZoHo). Badrena plays a drum kit that is augmented by a battery of hand drums and is joined by guitarist Dave Stryker, bassist Andy McKee and saxophonist Steve Slagle, all of whom bring different parts of the jazz perspective to the group’s sound.

The music Trio Mundo creates is a pastiche created around the sounds and rhythms Badrena draws out of his hybrid drum set. An Indian-influenced tabla beat can be augmented by high-pitched slaps on an African djembe drum along with a simple pulse on a Brazilian tamborim, while an acoustic guitar plays jazz chords and the bass bridges the gaps between the various musical references.

In less capable hands, it would be a polyrhythmic mess. But much like the seminal world music pioneers Oregon, Trio Mundo channels the disparate influences into a subtle yet powerful sound whose accent you can’t quite make out.

Badrena insists it’s because they are all friends as well as band mates.

“When we first got together it felt like we had been playing together for a long time,” he says “We just play and see what we come up with. Since all of our instruments are acoustic, we can take this anywhere and just play. And that also bonds us, the organic growth of our multicultural sound.”

But wait a minute: Stryker, McKee, Slagle and Badrena-that’s a trio?

“We cannot count so good,” he laughs. “We started as three, then Steve started to join us on a regular basis. We all feel like it’s important when he’s there with us. And the things he and Dave do together sound so great.”