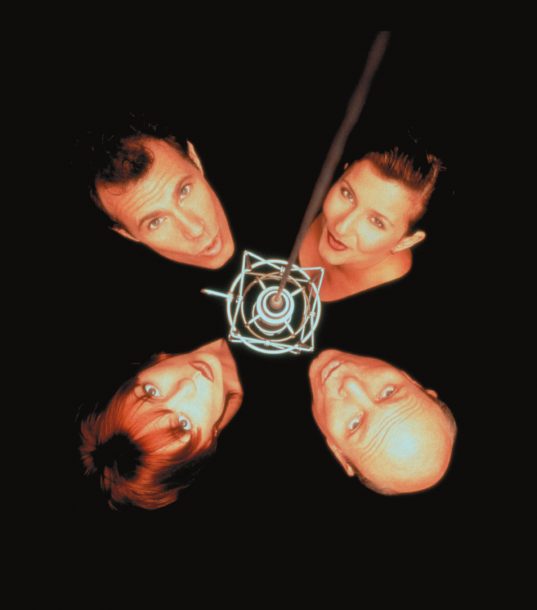 The Manhattan Transfer has been around for 25 years, and if you ask Janis Siegel about the glue that holds the group together, she states the obvious: “We love to sing harmony and you can’t do it alone.”

Siegel has been with the group since it all began in 1972, possessing a passion not only for harmony, but for the art of vocal arranging. “When we sing together,” she says, “it’s a magical happening for me. But don’t get me wrong. I love singing alone and I have several solo albums out there. It’s just that there’s nothing like being in the middle of a chord. It’s something that I love and always will.”

In celebration of the group’s silver anniversary, Siegel, with her Transfer mates Cheryl Bentyne, Tim Hauser, and Alan Paul, have released Swing, on the Atlantic label.

“The concept,” said Siegel, “came to us when we looked at each other one day and realized that, duh, it was time to do a swing album. I mean, we’ve never recorded an entire album of swing music; we’ve sort of dabbled in it, and people really perceive us as a swing group. There’s always been a smattering of swing in our past work, but nothing exclusively swing. It was time to do it.”

One of the group’s major triumphs was certainly Vocalese, which garnered 12 Grammy nominations in 1985, a recording that Siegel recalls as one of her most enjoyable projects. The new album, she says, is basically a swing adaptation of Vocalese, “where we’re singing arrangements for the most part. Especially those of Fletcher Henderson, who we found to be fascinating. As Benny Goodman’s arranger-and Benny was an incredible soloist-it was Henderson who really caused that band to swing. For me, doing the vocal arrangements and analyzing Henderson’s work have really taught me a lot about the workings of his mind.”

Henderson arrangements on the new CD include “Stomp of King Porter,” “Sing a Study in Brown,” “Down South Camp Meetin'” and “Sing You Sinners.”

If the concept of a totally swing album is a departure for this Grammy-winning organization, the group remains true to its eclectic tastes. Guesting with the group on Swing are the Western swing group Asleep at the Wheel, Nashville star Ricky Scaggs, and violin master Stephane Grappelli. “It’s like taking a ride across the country, stopping in Nashville, stopping in Austin, stopping in Hollywood. We couldn’t do just one aspect of swing; that’s not us.

“I realize it’s quite a jump from Ricky Scaggs to Grappelli,” she adds, “but that’s the way we think. We can’t understand why it’s so hard for people to understand our eclectic ways; maybe we confuse people who have to put everything in boxes-like radio programmers and journalists.”

This stylistic diversity is understandable, though, judging from the different influences of each member. “Of course, as a group, we’ve always loved the Pied Pipers, the Modernaires, the Smoothies, the Hi-Los and the Four Freshmen,” she said, “but individually we go off in some different directions-but we meet in a lot of places, too. Alan loves Sinatra, Ella, and doo-wop, and so does Tim. Tim also loves bluegrass and folk music while Cheryl grew up in a swing family; her dad played clarinet. Me, I love Motown. I grew up with it and to me it’s the benchmark of good pop singing. Aretha, the Four Tops, the Temptations-all class acts. I love gospel, too, as well as John Coltrane, Monk, and Pharoah Sanders.”

Siegel notes that the group worked with guitarist Scaggs in Nashville, an experience that caused them to realize how much jazzers have in common with the Nashville crowd. “They really are secret jazzers at heart,” said Siegel. “A lot of the styles of country are rooted in gospel and R&B.

The Transfer was also knocked out by Asleep at the Wheel, a group they met at an earlier gig, and decided to do a few cuts with them in Austin. “We love Bob Wills and the Texas Playboys and that whole era of Western swing,” continued Siegel. “And working with Asleep at the Wheel was so much fun and easy. We did “A Tisket A Tasket” with them, “Java Jive” and “Moten Swing.” There’s a lot of what they do that intersects with us. It was a great collaboration.”

The urban swing, of course, was left to Grappelli, who met with Hauser in France and performed “Nuages,” with a vocal arrangement by ex Hi-Lo Gene Puerling.

Siegel composed more than half of the vocal arrangements on the recording and she noted the job necessitates conveying with the voice what the original soloist was trying to convey with a musical instrument-even in the areas of tone and inflection. “If it’s a trumpet solo, the voice has to be brassy and trying to portray that tone,” she said. “I’m adapting instrument arrangements to voices. It’s like casting a play. If I have a baritone sax part, then most often Tim will sing it, because he can best convey that sound.”

The group began, as Siegel put it, like a script for a B movie. Hauser, in the beginning, was driving a taxi in Manhattan and picked up Laurel Masse as a fare. The two chatted over coffee that morning, discussing their mutual singing interests. Hauser met Siegel at a party a few weeks later and convinced her to leave the folk group she was performing with and, before long, both Siegel and Masse were part of the forming group. Alan Paul was the final ingredient; he was singing in the original production of Grease on Broadway. He met Masse, joined the group, and found a home.

Masse left the group in 1978 to pursue her solo career, and an audition by Cheryl Bentyne knocked Tim, Alan and Janis out. She was immediately invited to fill the vacancy.

“At one time, we were actually considered to be an underground group,” Siegel added. “We’ve traveled the route, from underground and mainstream to whatever. We used to play transvestite bars and lesbian clubs-just funky little bars around town.”

Since then, the group has nailed eight Grammy Awards, millions in sales and plenty of honors from the jazz press. “Awards are nice,” adds Siegel, “because they look good on the bio. But they don’t help the economics much. And it’s getting harder and harder to tour these days, with airline fares going up and more and more people now thinking twice about the price of a ticket.”

Today, the group still hangs together, although not as much because of geography and families. “Cheryl lives in Boston with her husband and little girl,” said Janis, “and I’m in Manhattan with my little boy, while Timmy and Al are still in Los Angeles with their families.”

Speaking for the group, Siegel says that the 25-year affiliation has gone by in a blur and her hope is for the group to keep on making magic on record. “I really love recording better than live performances,” she said. “The studio is great. I love crafting a record and not having to dress up and consciously think about how you’re appearing to other people. And there are still so many ideas and concepts that we can’t wait to explore. It all boils down to economics again; we’ll just have to sell millions and millions of each album and keep on going!”

Randy Weston’s Marrakech in the Cool of the Evening (Verve), and the music of Mavis Staples, Cuban Baroque, Eddie Palmieri, Erykah Badu, Mozart and Asleep at the Wheel.