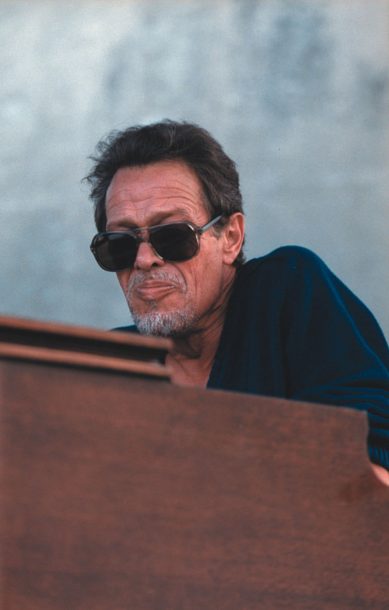 Hammond B-3 specialist Lyman Woodard is one of those underrated musicians forced by circumstances into mostly hometown playing. Born in Owosso, Michigan, where he recently returned after inheriting the family home, Woodard began his career playing piano in Detroit.

“What changed me to playing organ around 1963 was hearing Jimmy Smith on radio,” says 57-year-old Woodard. “Smith set the standard, discovering the stops on the organ that made it sound jazzy. I liked his early Blue Note albums, especially Crazy Baby.”

After high school, Woodard played in R&B bands, attended Toronto’s Oscar Peterson Advanced School of Contemporary Music, and returned to Detroit where he worked for Motown artists (also as musical director for Martha & The Vandellas). After stints in Flint, Jackson, Lansing, and Detroit, Woodard formed his Organization in the early 1970s and played regularly at the now-defunct Cobb’s as well as other venues, leading groups featuring rising teenage stars such as saxophonist Kenny Garrett and violinist Regina Carter as well as veteran musicians.

Though he’s curtailed club work to focus on his label with the goal of introducing unsung Detroit jazz artists, Woodard displays a classy, tempered sound and today, using an A-100 Hammond organ, appears annually at Michigan jazz festivals and works primarily with his trio (featured on Corridor’s Live at the 1996 Ford Montreux Detroit Jazz Festival).

“The beauty of the organ is that you can use it like a big band, and not just as a solo instrument,” says Woodard. “You can pull all the stops out and sound like Basie.”