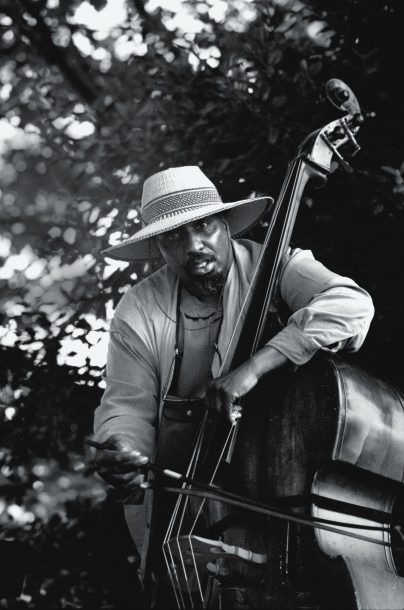 Jazz bassists are often described as anchors: steadfast in purpose, with the final word on tonality and time. But what about the function of a bass player in freeform settings, where foundations themselves are changeable? Here the better analogy might be the eye of a cyclone as it moves across the landscape. Encircled by monumental forces, it’s the imperturbable center, a locus of mysterious calm and unequivocal power.

There have been dozens of important bassists in free jazz and the related streams of avant-gardism; many are hard at work now. But when it comes to that radiant energy, you’d be hard-pressed to find one more tireless, or more significant, than William Parker. And as he approaches the lower threshold of elder-statesman stature, at 57, Parker warrants a fresh look even from those jazz listeners who tend to shy away from squalls.

Ever prolific, Parker appears on a cache of recent releases, including Shakti (AUM Fidelity), an inward-searching missive from his longtime boss, tenor saxophonist David S. Ware; Beyond Quantum (Tzadik), a brilliantly expansive outing with Anthony Braxton on reeds and Milford Graves on drums; and, just out, Farmers by Nature (AUM Fidelity), a collective rumination with pianist Craig Taborn and drummer Gerald Cleaver. The common thread on these albums isn’t open form, necessarily; it’s an extraordinary level of interaction. Taborn, in a recent e-mail from Paris, described Parker’s bass work in terms almost suggestive of relativity theory: “His approach has the effect of throwing musical ideas introduced by other musicians into much deeper relief, by contextualizing or de-contextualizing them.” In a way, that’s a jazz bassist’s mandate to the nth degree, minus the certainty of style.

Parker grew up in the New York area, drawn to R&B as well as jazz. Dave Burrell, the august avant-garde pianist, recalls teaching a teenaged, Curtis Mayfield-crazy Parker at a community center in the South Bronx. “Next thing I knew,” Burrell said recently, with a chuckle, “he was downtown playing with Cecil [Taylor], and it didn’t seem like such a long time between those two points.” (Burrell, who used to feature Parker in his Full Blown Trio, is now on tour with the bassist’s Curtis Mayfield Project.)

Even as an upstart, Parker was distinguished by the bigness of his sound. “It was just really, really strong, and rhythmically motivating,” Burrell said. “He had a lot of power.” That assessment jibes with a 1973 Frank Lowe recording called Black Beings, reissued last year by ESP-Disk. Parker, all of 21 at the time, already sounds like several bassists at once: plucking clusters of notes, straining fast, conveying himself as a sort of gridiron mass. His style would deepen but not harden, judging by the available evidence.

Consider, for instance, that as a member of Ware’s quartet, alongside pianist Matthew Shipp and a few different drummers-check out the three-CD set Live in the World (Thirsty Ear), with Susie Ibarra, Guillermo Brown and Hamid Drake on one disc apiece-Parker was, metaphorically, both an anchor and an eye. He pulled off the same feat in a few of his own groups, notably the Little Huey Creative Music Orchestra. It’s no wonder that Gary Giddins, mentioning him over the years in the Village Voice, used one adjective repeatedly: teeming. That’s “to become filled to overflowing,” as Merriam-Webster has it. A more archaic usage involves conception and procreation, which probably applies more readily to Parker now than it would have 35 or even 15 years ago.

It was in 1996 that he established the Vision Festival with his wife, the dancer Patricia Nicholson Parker. And to call that event his baby would be misleading, but not untrue. Though run by Nicholson Parker with a board of directors (on which her husband sits), the Vision Festival feeds on an ideal of multiplicity most powerfully embodied by the bassist himself. “It’s about breaking barriers,” he told me recently, “uniting musicians, and starting this slow process where people who don’t normally acknowledge each other can begin to think about that.”

One of the two albums Parker released on AUM Fidelity in 2008 was a byproduct of the Vision Festival, which proves that some investments still pay dividends. (Or did, once.) Double Sunrise Over Neptune came out of a large-group premiere reflecting Parker’s worldlier, more utopian inclinations: On it he plays the doson ngoni, a Malian hunter’s guitar. Meanwhile an Indian singer quavers over shifting textures, and horns and strings commingle. Still, it seems a waste that “Morning Mantra,” the first of three sections, employs the same lulling bass ostinato as “Neptune’s Mirror,” the last. Momentum may not be the point, but surely a little more couldn’t have hurt.

The other, better album to appear last year was Petit Oiseau, featuring a quartet with Lewis Barnes on trumpet, Rob Brown on alto and Hamid Drake, Parker’s strongest rhythm partner, on drums. Here the compositional forms are sturdy and often concise, though they open up to individual and collective abstractions. Ethnic sounds resurface, explicitly or obliquely, and there are stretches of postbop swing, along with loose-limbed funk. Parker holds the whole thing together, inspiring excellent work from his colleagues and hitching the band to a common aim.

Petit Oiseau is the William Parker record I’d recommend to neophytes and skeptics. Among its many lessons is a better understanding of Parker’s bandleading as a corollary to his bass playing. But then Taborn, testifying, probably put that lesson best: “William leads with the same strong but subtle approach [with which] he plays. You can feel him guiding things but are not really aware of him dictating anything. The context seems to harmonize around him.” The storm, as it were, rolls on.